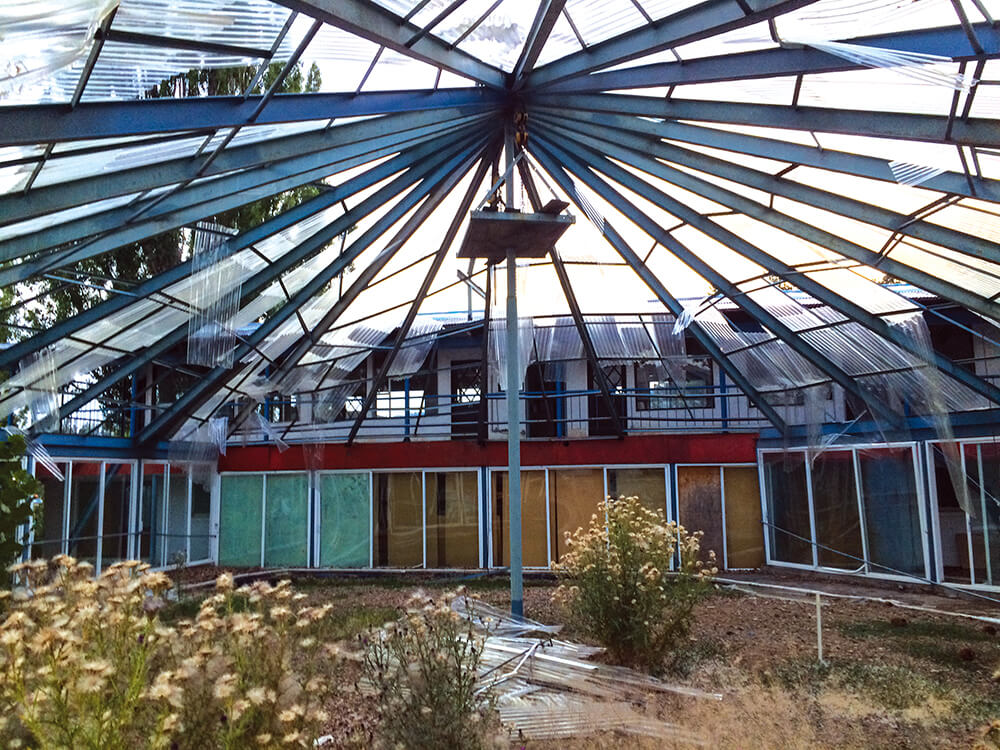 When Kila Properties purchased the dilapidated Henrikson building in 2013, the majority of Tahoe City residents and businesses breathed a sigh of relief. The run-down Henrikson building, built in the late 1950s (much of it without permits), today is only partially occupied and serves as an eyesore at a key location — the west gateway to Tahoe City. Kila Properties’ plan to demolish the crumbling building and replace it with the 118-room Tahoe City Lodge, complete with a restaurant, rooftop pool, and bar, met with widespread community support. At the end of 2016, as part of the Tahoe Basin Area Plan, it was unanimously approved by the Placer County Board of Supervisors and the Tahoe Regional Planning Agency, and even received the hard-to-come-by endorsement of the League to Save Lake Tahoe. Demolition was set to occur this spring.

And then it all came to a grinding halt.

In January, the Davis-based California Clean Energy Committee (CCEC) filed a lawsuit to stop the implementation of Placer County’s Tahoe Basin Area Plan, claiming that the environmental analysis of traffic impacts under the California Environmental Quality Act (CEQA) was inadequate. The lawsuit named the Tahoe City Lodge as a party of interest.

The nonprofit CCEC was founded in 2008 by attorney Eugene Wilson, who is also the sole member, “to advocate throughout California for energy efficiency and renewable energy including solar, wind, geothermal, and energy efficiency,” according to its website. Originally, Wilson was based in Santa Barbara and was the founder of Sustainable Transportation Advocates, which in 2009 sued the Santa Barbara County Association of Governments over its approval of a tax to fund transportation projects. Since that time CCEC has sued the City of Woodland in 2014 for approving a 234-acre shopping center, the City of San Jose in 2015, claiming it didn’t disclose an accurate baseline level of greenhouse gas emissions in its general plan environmental review, and that same year the City of Pasadena for approving the Glenarm Power Plant Repowering Project.

The CCEC’s lawsuits — of which there are many throughout the state — raise questions about CEQA. While environmental groups and government officials say that the right to sue under CEQA is a legitimate and necessary part of the process, developers say that CEQA allows one individual to stop popular projects that have gone through years of public discussions and input at a high cost.

CEQA was passed in 1970 shortly after Congress approved the National Environmental Policy Act to institute a statewide policy of environmental protection. The act requires state and local agencies to identify a proposed project’s significant environmental impacts and to avoid or mitigate those impacts, if feasible.

“The intent of CEQA is to make sure that to the best of any jurisdiction’s ability, the issues of environmental impacts are identified, analyzed, reviewed, and discussed publicly and mitigated where possible,” said Placer County Supervisor Jennifer Montgomery, who represents Tahoe.

The CCEC lawsuit against the Tahoe Basin Area Plan is not the first time CCEC has been active in North Tahoe. In 2011, it sued Placer County and JMA Ventures to halt the expansion of Homewood Mountain Resort, a master plan that had been unanimously approved by five government boards  — the TRPA Advisory Planning Commission, TRPA Governing Board, North Tahoe Regional Advisory Council, Placer County Planning Commission, and Placer County Board of Supervisors. In 2012, the Placer County Superior Court ruled in favor of the defendants on all counts, but then later that year the CCEC filed an appeal, which took three years to resolve. The project has still not broken ground. Of the six challenges raised by CCEC, California’s Third District Appellate Court rejected all but one regarding the environmental impact report’s failure to identify or evaluate wildfire evacuation risk on the West Shore. As a result, JMA had to pay for the North Tahoe Fire Protection District to hire a consultant to evaluate Homewood’s wildfire evacuation mitigation measures. JMA has said it will help the NTFPD raise money for a new West Shore fire station, one of the report’s recommendations.

CCEC is also suing Placer County over its approval of Martis Valley West, the controversial development that was approved last year. The lawsuit alleges that the project’s environmental impact report (EIR) did not provide sufficient environmental analysis and the county failed to recirculate the EIR for public comment after new information was added.

Wilson did not return Moonshine Ink’s multiple requests for comment.

Sacramento-based attorney Whit Manley, who represented JMA and Kila Properties in CCEC’s lawuits against them, says that Wilson has filed, at minimum, 10 lawsuits throughout the state.

“That is the floor, not the ceiling,” he said.

Manley explains that there are relatively few barriers to filing a lawsuit on CEQA grounds, which he calls an “asymmetry tilted in favor of making it easy to file a challenge.”

“The number of hearings, the amount of outreach, the unanimity of support — none of that matters if one person wants to file a lawsuit,” he said. “The cost of filing a lawsuit is minimal compared to the cost of complying with CEQA, which is quite high.”

Montgomery says this is how it should be.

“This avenue of litigation is not a bug, it’s a feature of CEQA clearly written into the CEQA language,” she said. “If you are a commenter on the CEQA process, you have standing to litigate. It’s both the beauty and the pain of CEQA.”

Montgomery adds that although there was overwhelming community support for the Tahoe Basin Area Plan and Tahoe City Lodge, she wasn’t completely surprised about the legal challenge.

“It was a little disappointing but not unexpected, and not unfair,” she said. “It’s part of the CEQA process.”

Developers have a different view.

The lawsuit against the Tahoe Basin Area Plan — which took five years to complete and included more than 100 public meetings — effectively halted demolition of the Henrikson building and construction of the Tahoe City Lodge. Kila Properties CEO Samir Tuma, who is in the process of settlement discussions with the CCEC, said the project is now one additional year behind.

“It’s extraordinarily frustrating to have a project that’s so well supported by the community and the regulatory and environmental community, but is being held up by a lawsuit,” he said. “It [the lodge] was supported by the League to Save Lake Tahoe, passed unanimously through all levels of the county and TRPA, hundreds of locals signed a petition supporting it, yet it gets held up by a lawsuit that doesn’t challenge the validity of the lodge project.”

Art Chapman, founder and chairman of JMA, said the CCEC lawsuit against Homewood delayed the project for three years and cost his company millions of dollars in interest and legal fees. (Another lawsuit filed by the Friends of the West Shore, Sierra Club, and Earthjustice in January of 2012 was “settled relatively quickly” at the end of 2014, according to Chapman.)

Under California law, if the plaintiff in a case affecting the public interest prevails, he is entitled to recover attorney fees. If the defendant wins, however, he is not entitled to the same. The City of San Jose paid the CCEC $300,000 in legal fees as part of its settlement, and the City of Pasadena shelled out $500,000 to settle its lawsuit.

“It’s long overdue that the California legislature looks at abuses that are occurring under CEQA, and try to resolve some of the things that were never intended in the first place,” Chapman said. “There is a need for CEQA, a need for serious environmental review, but it’s being abused generally and being used for purposes not originally intended.”

There have been numerous attempts in Sacramento to reform CEQA, but to no avail.

“There have been efforts to change rules at the state legislature over the years, but the labor and environmental lobby are against it,” said Manely. “If they are against something, the political reality in this state is that it won’t pass.”

Some comparisons have been made between Wilson and serial ADA (Americans with Disabilities Act) lawsuit filer Scott Johnson, who in 2014 sued at least 45 North Tahoe businesses and has filed more than 2,000 federal lawsuits in the California Eastern District Court in Sacramento since 2004.

Montgomery is skeptical of the comparison, although she says there are some similarities.

“If you look at California filing records, (Wilson) files pretty consistently,” she said. “I am not sure that he rises to the level of Mr. Johnson, but it’s fairly clear he is actively looking for litigation throughout the state.”

Manley believes that Wilson is in it for the right reasons.

“I think Eugene is not one of those purely cynical shakedown lawyers,” he said. “I don’t necessarily agree with him, but I do think he is sincere. I think he is trying to push policy in a sense that he thinks is good.”

Ann Nichols was one of 45 local residents who signed a petition supporting the CCEC’s comment letter on the Tahoe Basin Area Plan, and she is working as an environmental consultant for Wilson on the Martis Valley West lawsuit. She believes that comparing Wilson to serial ADA lawsuit filer Johnson is wrong.

“They are grasping at straws trying to denigrate someone who is actually helping us. He is a totally upstanding ethical human being,” she said. “If we don’t have people like this, who can stand up for us?”