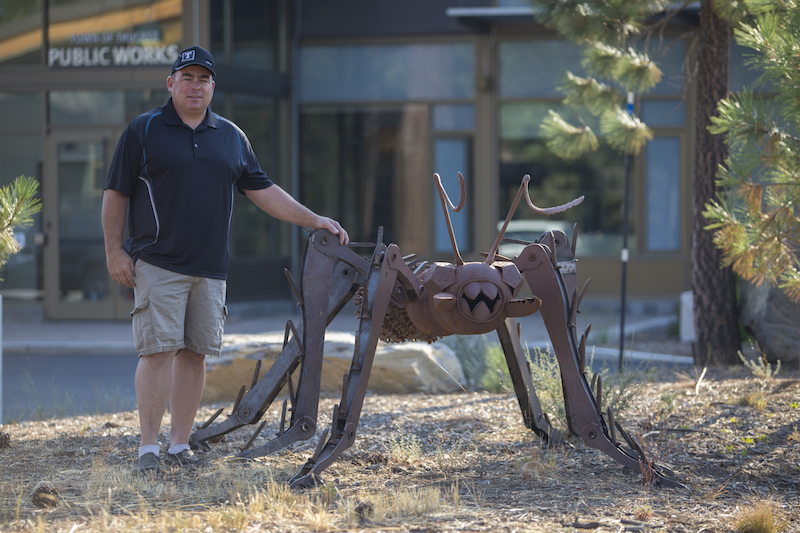 Dawn Parkhurst, a bus driver for the Tahoe Truckee Unified School District, navigates the Truckee roundabout at Prosser Dam Road upwards of eight times a day, and she has grown a bone of contention about it. The central island — an area owned by Caltrans and maintained by the Town of Truckee — doesn’t inspire Dawn, who feels that the rather large dirt hill, featuring lots of exposed mulch and a few short, scraggly plants, reminds her of a giant, barren anthill. One evening about two years ago, Dawn came home from work and complained to her husband, Matt, that the roundabout was an eyesore. The two of them came up with an unconventional idea that has caused a minor ruckus at the town, but seems headed to success.

Matt, a firefighter, metal worker, and third generation Truckee resident who owns a mini makerspace called MPJ Fabrication, hoped his scheme would make the mound more attractive to people entering town from Calif. Highway 89 North, which is a main entry point for visitors. He would build ant sculptures made of metal and found objects, and install them on the mound. About six months ago he got to work.

After building a prototype large-scale red ant made from 50 percent recycled metal and standing at about 3.5 feet tall and 4.5 feet long, Matt looked into the town’s procedure for approving public art. After some research, he still found the process to be unclear, but he did learn that Caltrans owns the roundabout because the intersection includes a state route.

Matt said he couldn’t figure out the proper channels to go through with Caltrans, either; he therefore decided to use a different approach.

He took the renegade route, and with the help of six friends, one midday in early July placed the ant on the “anthill.”

“I hate that term ‘renegade,’” Matt said. “But there was no form about how to place the art … no formal way of submitting.”

Within 48 hours, Town of Truckee representatives removed the sculpture and relocated it to land near the Humane Society of Truckee-Tahoe, where it sits today. The town said the sculpture was removed because it had not been approved, according to Matt.

The community took notice. Within two days, the Town had received 11 emails asking for the sculpture to be returned to the roundabout. “It just gave an otherwise mundane man-made hill some organic character,” Truckee resident Sara Kane said in one of the emails. Three phone calls were decidedly anti-ant.

At the time of this article’s publication, a Facebook post (see below) from Matt advocating for his project had received 81 shares, 22 comments, and 28 reactions.

According to Dan Wilkins, Public Works Director and Engineer for the Town of Truckee, public installation art typically generates public comment, both for and against it. “There was a similar dialog with the flowers [at the recreation center roundabout],” he said. “Folks are very interested in these types of displays.”

Because of the public comment and the perceived need for art in the space, Matt and Wilkins worked together to draft a proposal in the weeks following the removal of the ant. The pitch, suggesting the town purchase and install the ants, was presented and approved at the Aug. 9 Truckee Town Council meeting, pending approval of an encroachment permit from Caltrans.

“From the town perspective, we had a local sculpture, had a proposal, and a prototype. This made it easy to consider,” Wilkins said.

Matt’s proposal offered to donate two ants and sell the Town six more — making for eight in total. The cost to purchase the sculptures is $15,000 — the same price the town paid for Troy Corliss’ flower sculpture in 2010. Those blossoms were installed on town property and therefore did not require Caltrans approval.

“I was not intending to profit from this project, but materials are expensive,” Matt said. Each ant takes approximately 40 hours to complete, and materials for each cost $750. To complete the structures, he will have to spend less time fighting fires in Southern California, he said.

Some of the materials have been donated. Eric Smith, Chief Inspector at the Nevada Board for the Regulation of Liquefied Petroleum Gas, is donating the decommissioned propane tanks used for the body of the ants, and Jamie Waltman of Waltman Snow Plowing donated the chains that adorn the ants’ abdomens. The steel legs are decorated with railroad spikes.

According to Wilkins, in the Caltrans proposal, the town will include input from a landscape architect to design a complementary setting for the ants.

The Town hopes to submit the proposal for an encroachment permit to Caltrans in three weeks. “I expect there would not be an issue,” said Liza Whitmore, Public Information Officer-Sierra Area Caltrans District 3.

In the meantime, Matt is already at work on the second ant. He hopes to finish them all before the snow falls.

Piles in the Forest and Packages in Your Hand

Build Us an Anthill