Bold but cold sunshine, fresh snowfall, and more than 600 racers from across the country made this year’s Great Ski Race, March 6, one of the best ever: That was the overwhelming reaction from both skiers and many of the 150 volunteers who put on the 26K race last Sunday.

“The Tahoe Nordic Search and Rescue Team is so fortunate to finally have a beautiful day for the Great Ski Race and party and to be able to introduce a new course which was in superb condition and clearly enjoyed by all the skiers,” said Dirk Schoonmaker, race co-coordinator. “Our amazing sponsors and registered racers allowed us to raise more than $65,000 for the team. We could not have asked for a better outcome.”

For the first time since the race began in 1977, the course was switched from a point-to-point route starting in Tahoe City and ending in Truckee, to a circular route that looped around Mt. Watson and returned to its start at Tahoe XC. That meant the finish-line party, featuring live music from The Blues Monsters and lunch catered by Men Wielding Fire, was at Tahoe XC, which turned out to be a very good venue, according to co-coordinator Doug Read.

Registered racers varied in age from 6 to 76. Winners were Wyatt Fereday (1:14:38) — his third first-place finish — and Katerina Nash (1:23:24) — her fifth win. Detailed results for all racers are at thegreatskirace.com/results.

The Great Ski Race is the team’s only fundraising event. Since the race has been cancelled six times in the past ten years because of drought and Covid-19, the team has relied on grants to fund the equipment, gasoline, and other expenses from locating people lost in the backcountry and educating the public on how to stay safe while lost. 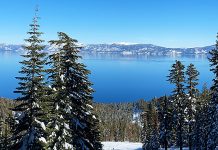