Home Columns In the Past Blow the Lid Off! 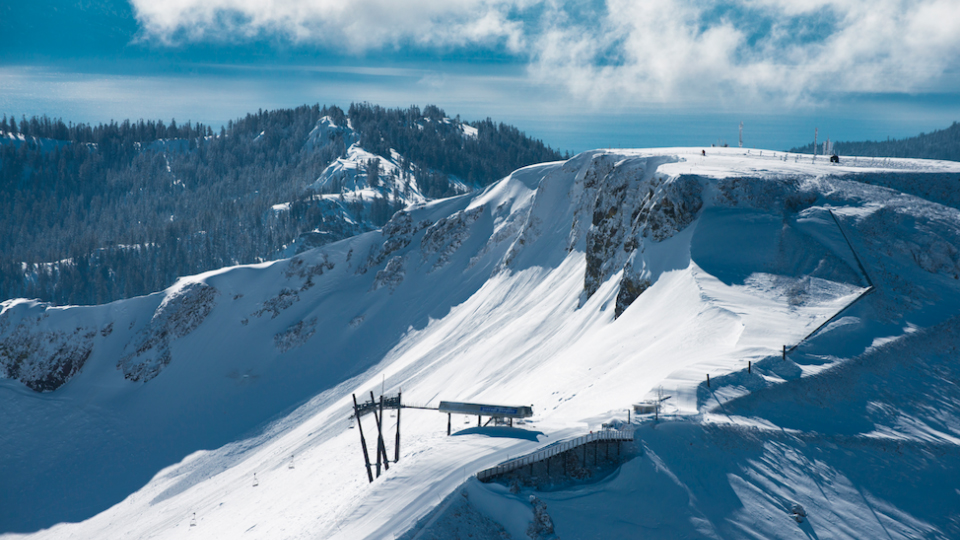 Once you get to the top of the Palisades at Squaw Valley, you might wonder why the terrain becomes a perfectly flat area, about the size of a football field — but then again, maybe you are just thinking about which epic line to take.

The top of the Palisades, or geographically Squaw Peak, is accessible after a short hike from the Siberia chair lift and widely known for access to a set of six chutes — Chimney, Schmidiots, Main, The Tube, Extra, and National, as written by Scott Gaffney in a 2009 Skiing Magazine story. The Palisades at Squaw are a highly photographed and filmed area, and on a warm spring day there are usually crowds watching for someone to take the next great line, but there are a surprisingly few records on how the set of cliffs was flattened.

In 1936, the Federal Aviation Administration designed a short-range navigation system called Omni Directional Radio Range (VOR) in which radio signals from a network of fixed ground radio beacons are transmitted to aircrafts and allow pilots to determine their location in the skies. By 1946 the system was deployed and VOR became the standard air navigational system in the world used by both commercial and general aviation, according to Hardy Bullock, Director Of Aviation & Community Services at the Truckee Tahoe Airport. At 9,000 feet, Squaw Peak was the perfect place to put towers to direct airplanes to Truckee, the Bay area, down toward Southern California, or up toward the Pacific Northwest — the only issue was the peak wasn’t flat enough for the infrastructure.

Lowell Northrup, a “craggy, ex-Seabee colonel” was the engineer for the job, as told by Wayne Poulsen Jr., whose family founded Squaw Valley. In 1962 Northrup and his crew blew off the dome-like top of the peak and then blasted a tunnel through solid granite up the Siberia ridge to the top, which was used to access the radio station during deep snow years. As the late Dick Reuter, former Squaw Valley Mountain Manager said, “It was a huge excavation and quite remarkable at the time. The tunnel’s damn big and up to 8 feet high in some places. It must stretch a quarter mile,” according to tahoetopia.com.

There are hardly any records on the project, the FAA told Moonshine Ink, which is surprising for such a large undertaking. But Poulsen says that in preparation for the 1960 Olympics at Squaw Valley, a lot of surplus machinery from World War II was brought in. With a plethora of machinery and men who had gotten back from the war and were willing to work, flattening a mountaintop was no problem — cheap, for that matter. The lack of records is most likely due to the fact that the procedure was one of many excavation projects on the mountain at that time, along with the cutting of trails and new lifts.

VOR stations have been largely put out of commission with the development of GPS but many remain intact as a “safety net” for planes to use in case of a system failure. The building on Squaw Peak is said to have a two-bedroom house stocked with communications equipment and a neighboring building full of weather technology that is still maintained. Who knows, maybe it will be the next rental on Airbnb soon enough.

Blow the Lid Off!