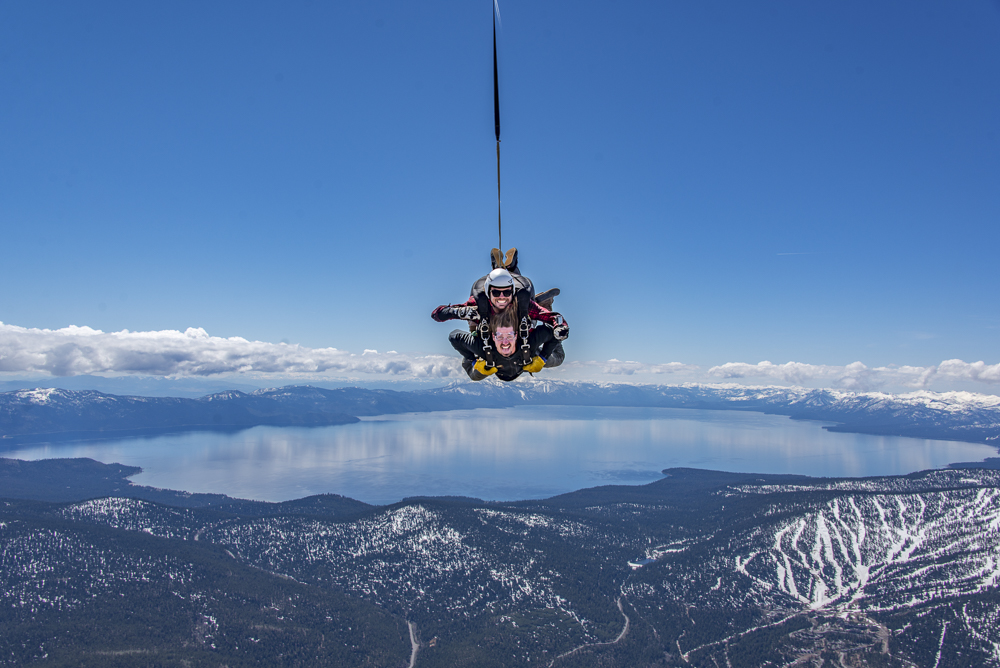 About half way down, I legitimately thought I had pooped myself. But, to be perfectly honest, I was far too excited to care about such trivial matters as I plummeted through the crisp air above Tahoe — upside down, right-side up, a glimpse of the lake, the mountains of the Sierra Nevada whirling through my peripherals. We had just ascended to 16,000 feet above sea level in the tail end of a 206 Cessna, and were enjoying the fast way down.

On May 2, I played the part of the over-excited guinea pig in Truckee’s first (and second) commercial tandem skydives, jumping out of planes for the first time with the new company Skydive Truckee Tahoe. After their May launch, they are now the first and only company with a drop zone in the Truckee/North Lake Tahoe region.

“A couple of years ago we realized, man, this place is really missing a drop zone,” said Mike Swanson, part-owner of Skydive Truckee Tahoe and a world champion skydiver. “[Tahoe] is one of the most beautiful places on the planet to do a skydive, so why not offer that here?”

Swanson, who has more than 22,000 jumps under his belt, launched the company with his wife, Jen Drew, and her sister, Julia Drew, who are also passionate skydivers. The family team has been living in Tahoe for more than seven years, and after falling in love with the area and recognizing a need for a local drop zone, they began working on the company about two years ago. Swanson has the majority of the skydiving experience, but Julia and Jen also have extensive backgrounds working with and managing drop zones around the country. They are joined by two seasoned tandem masters and a chief pilot.

Unofficial jumps have taken place locally in the past, but the team says Skydive Truckee Tahoe will be Truckee’s first official drop zone and United States Parachute Association-affiliated company.

“We’re adhering to a set of safety guidelines,” Julia said, in reference to the strict regulations associated with the USPA and the Federal Aviation Administration’s rules for skydiving. “That’s a good point for people who are looking to make a skydive who have never gone before.”

Swanson says that permitting surprisingly doesn’t play a large role in establishing a drop zone, but there has been a stream of communication and agreements with the Tahoe Truckee Airport District in order to comply with FAA regulations and noise abatement considerations. They have also leased a plot of land from the airport at 13184 Sailplane Way outside of Truckee, where they have cleared a 300-by-300 foot landing area next to their on-site office.

A tandem jump with Skydive Truckee Tahoe starts out in their office with a reassuring stack of paperwork, and a meeting with the human you will be strapped to as you fall almost 2 miles through the air space above the airport. Ellis Bourbonnais was the instructor to introduce me to the world of skydiving. Before the flight, he advised me on the proper body technique as you exit the plane, and gave me a sturdy harness to cinch into. It is strongly advised, especially for the male gender, that you thoroughly adjust the harness and “get all the furniture in the right room” before jumping.

I knew the jump would be spectacularly beautiful, but the 10-minute climb to altitude over the north section of the Tahoe Rim Trail was a treat in and of itself. Then, the door to the back of the plane is rolled up, and it finally hits you that you’re about to jump out of this thing. A moment of panic, a moment of acceptance, flash a quick metal sign to the wrist mounted GoPro, “one, two, three,” and you’re in free-fall. No, this writer did not lose control of his bodily functions during the fall — luckily, for Bourbonnais — but I did just about lose my mind hooting and hollering on the way down. It was my first skydive, and when Swanson told me they wanted to get a better picture and I might be going up for another jump, all I could think was, “Hell, yeah!”

Although Skydive Truckee Tahoe provides the opportunity to jump solo for anyone with the necessary certifications, which requires at least 200 logged jumps, Swanson says they are focusing mainly on tandem jumps and introducing beginners like me to skydiving.

“My favorite thing in all the years working with people at drop zones is working with first-time skydivers,” Jen said. “When they go up there and they experience the feeling of flight — and in a beautiful area like this — they come down so elated, and they’ll never, ever forget it.”

A New Direction for the Resort Association