Home Columns In the Past The Bigler Blunder 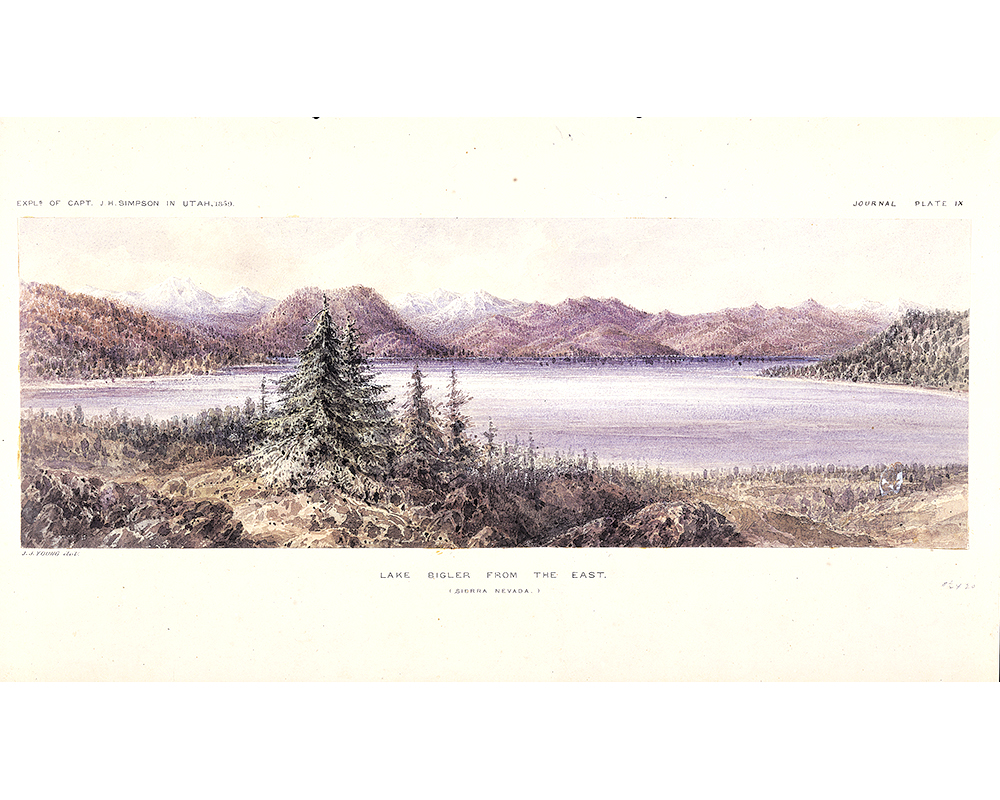 One of the truly horrific episodes in the long history of humans at Lake Tahoe was the renaming of the lake in 1854. Calling the most gorgeous and iconic alpine lake in the world “Bigler” has to rank with political bumbling worthy of the current administration. How did it happen? Who should be blamed?

In 1844, Army Corps of Engineers explorer John Fremont reached a magnificent lake. He wrote: “With Mr. Preuss, I ascended today the highest peak to the right [Red Lake Peak]; from which we had a beautiful view of a mountain lake at our feet, about 15 miles in length, and so entirely surrounded by mountains that we could not discover an outlet.”

Fremont referenced it as “Mountain Lake” on his maps. Cartographer Charles Preuss, a member of his party, decided it should be Lake Bonpland after the noted French naturalist of the time. Bonpland did not really take and very few whites traveled to the lake anyway, so Mountain Lake was the common reference until the 1850s.

John Bigler was the third governor of California. Elected in 1851, he was renowned for being involved in the rescue of members of the Donner Party in 1852. His involvement is somewhat murky; he may have financed a rescue attempt, or he may have actually made a rescue attempt.

Bigler won an unprecedented second term in a close election in 1853. His supporters, drunk on victory and probably other spirits, proposed to name the beautiful lake after him and the legislature did so in 1854.

Politics being what they were at the time, an opponent was quoted as saying: “Gentlemen, you have all heard of Lake Bigler, the most beautiful sheet of water on earth; it lies among the mountain tops of the Sierras, but JOHN BIGLER lies all over the state.”

With the War Between the States heating up, Bigler’s pro-slavery Southern sympathies did not sit well with the California electorate and he was defeated for a third term.

His political opponents took on the task of changing the lake’s name. Dr. Henry De Groot is sometimes credited with naming it Tahoe, though some say there was an effort that pronounced it Ta-hoo or even Tay-Hoo.

The name of the Jewel of the Sierra was the same for hundreds of years before whites came. The shoreline was called “Da ow a ga” and was the “giver of life” for the Washoe people who lived here in the temperate months and returned to the Washoe Valley in the winter. “Da ow” was a contraction referring to the lake itself, the way we refer to “going to the lake” today.

Mark Twain railed against the name Tahoe. In a Territorial Enterprise post of September 1863, he ranted, “I hope some bird will catch this grub the next time he calls Lake Bigler by so disgustingly sick and silly a name as ‘Lake Tahoe.’ I have removed the offensive word from his letter and substituted the old one, which at least has a Christian English twang about it whether it is pretty or not. Of course Indian names are more fitting than any others for our beautiful lakes and rivers, which knew their race ages ago, perhaps, in the morning of creation, but let us have none so repulsive to the ear as ‘Tahoe’ for the beautiful relic of fairy-land forgotten and left asleep in the snowy Sierras when the little elves fled from their ancient haunts and quitted the earth … ‘Tahoe’ — it sounds as weak as soup for a sick infant. ‘Tahoe’ be — forgotten!”

There are many other epithets in the original essay. I have left it to the reader to review as there are also several racist comments.

The Nevada Daily Transcript wrote in June 1863: “It is proposed to drop the name of Bigler from the lake among the Sierras and adopt the Indian name of Tahoe. Good idea. Why the finest sheet of water in the mountains should be named after a fifth-rate politician we have never been able to see. Let’s call it Tahoe … Who don’t say Tahoe?”

It’s fitting that the Washoe name remains the name of the most beautiful alpine lake in North America. Given their propensity for scandal and controversy, naming beautiful places for politicians is at best a silly mistake, at worst a national embarrassment.