Home News Housing Crisis Back of the House in Dire Straits 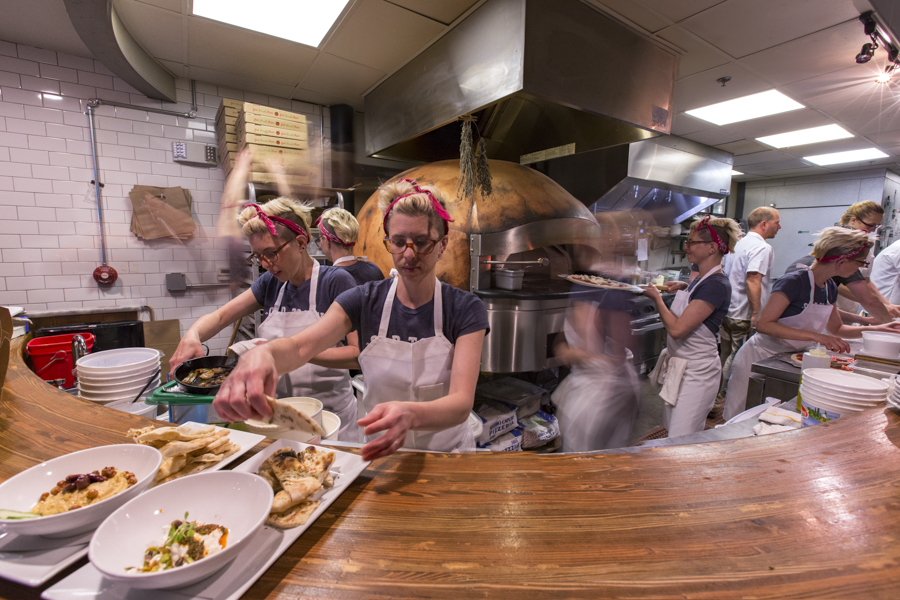 At the bottom of its beer and wine list, Pianeta, a 19-year-old Italian restaurant in downtown Truckee, presents diners with the option to buy a six-pack as a gratuity for the kitchen staff. When customers place the order, a ticket not only prints at the bar for accounting purposes, but also prints in the kitchen; to which the kitchen staff then responds by banging pots and pans so loudly that the purchasing patron (and the entire restaurant) hears the acknowledgement.

Tom Beckering, managing partner and owner, says the celebration creates a snowball effect as more and more customers purchase rounds for the hard-working staff. Proudly presenting a cup jammed with receipts, Beckering says the kitchen staff will likely never have to pay for a post-work round again.

This is the Truckee we know and love.

Creative incentives like this come from the heart of Truckee/Tahoe restaurant owners, but these sorts of programs are being put into place as solutions to the severe lack of kitchen staff in the area.

Local restaurant owners, managers, and chefs say the dwindling pool of back of the house staff is a crisis. “It’s gone from never having been a problem to always being a problem,” said Bill Arnoff, who has been a chef at Pianeta for 17 years.

The restaurateurs attribute the cause to the abundance of higher-paying jobs in other fields, a shrinking influx of immigrants, substance abuse in the kitchen, and fewer seasonal employees. At the root, as with a range of community issues today, is lack of affordable housing in Truckee/Tahoe.

Fine dining, burger joints, and even cafés are struggling to keep their kitchens staffed, and, in speaking with restaurant owners and managers, it was not surprising that all interviews were conducted while they were on the clock and working their tails off. Interviews happened while one restaurant owner rolled silverware, another prepped the bar for that evening’s service, one even pulled over on Mount Rose Highway, after running restaurant-related errands in Reno, to take a quick call.

This staffing problem is seen at established institutions like Pianeta and Bite American Tapas, which opened its doors in 2008, but is also rampant at new hot spots like Old Town Tap.

Craigslist and the Facebook group North Tahoe / Truckee Jobs are both absolutely inundated with back-of-the-house positions, cumulatively having 21 different kitchen jobs posted since June 1 as of press time. In one of the most striking posts Tahoe Mountain Brewery’s line cook position starts at $20 per hour — and workers still aren’t staying.

“I once spent $500 to advertise a dishwasher position,” Beckering said.

Mainly citing a shrinking pool of immigrants, the “death of the ski bum,” and more lucrative jobs as the reasons Pianeta is struggling to staff their kitchen, Beckering is highly concerned about the direction in which Truckee is heading.

“We are losing staff to Martis Camp and West Shore Cafe because they can afford to pay their employees more,” he said, claiming the Martis Valley development pays $20 to $30 for everything from line cook to construction positions.

Also, immigrants and transient employees have always made up a bulk of Truckee/Tahoe kitchen staff. Immigrants come to area to save money with plans of eventually moving back to their home country. But now, with the high cost of living, they are able to save less money, making this area less desirable. In the same boat is the ski bum, or transient worker, as they also cannot afford to live here while working the amount of hours desirable for their lifestyle.

A common theme for these two worker pools is that they do not have a passion for culinary arts; they are not aiming to be career chefs. Therefore, they have no problem leaving the kitchen for a different, higher-paying position.

Beckering admits that there are more attractive jobs available in the area than working in the back at Pianeta, such as in construction. “Kitchen staffing fluctuates with the economy and the housing crisis,” he said.

“In 2008 there were a bunch of rentals, and, as the economy started to get better, the number of construction jobs increased,” Beckering said.

He fears that with the loss of employees and dwindling number of full-time residents Truckee will start losing its identity.

“This place is turning into a high-end tourist destination and there is a disconnect,” Beckering said. “In 15 years will Truckee even have a softball league?”

The same problems are apparent to Thomas and Brooke McCarthy, owners of Bite American Tapas in Incline Village, who agree with Beckering.

“The employee shortage is directly related to the lack of housing,” Thomas McCarthy said. “Business grows with a better economy and our line cooks are being taken away by construction and landscaping jobs; those jobs weren’t as available years ago.”

Luke Bill and Marlena John, owners of Old Town Tap in Truckee, are also struggling to staff their kitchen. So much so that the couple, who has worked in the service industry for years but just opened Old Town Tap 13 months ago, is forced to work anywhere from 10 to 17 hour days, every day.

Since its inception, the restaurant has had 30 and 40 dishwashers come and go, while only two of their original staff are still at the restaurant.

And it’s not for lack of trying or a poor working environment. “We have had no problem staffing our front-of-house,” John said.

Bill specifically cites circumstances like an off-balance pay structure, drug and alcohol abuse, and the housing crisis for why he and his wife are having such a hard time keeping a kitchen crew at the Old Town Tap.

“We lost our chef because he was commuting to and from South Lake and it was absolutely killing him,” Bill said. Currently, their kitchen workers commute from Sierraville, Sparks, Truckee, and Reno.

Can dishwashers even live in Tahoe/Truckee? Pianeta, for example, pays its dishwashers $14/hour. Thus if they work 40 hours/week they earn $2,240/month gross. The US Department of Housing and Urban Development considers paying more than 30 percent of one’s monthly income on rent a burden.

Old Town Tap’s Bill thinks the pay structure for restaurants in California is totally out of whack and is hindering his ability to pay the back of the house staff the money they need to afford to live here. He explained that California is not a tip-credited state, and restaurants are required to pay all employees, regardless of the amount they make in tips, at least minimum wage. According to the United States Department of Labor “tips are the property of the employee,” which means that, legally, management cannot demand that those making the tips share a percentage of their earnings with the back of the house.

However, employers can suggest that those earning tips share a percentage with the kitchen — this is what most Truckee/Tahoe restaurants do, but it is still only a fraction of what the server or bartender walks away with in their pocket. For this reason, front of the house positions are typically more lucrative and desired than the back of the house ones.

“Making California a tip-credited state would allow us to pay the kitchen more, and that way they could afford to live here and pay rent,” Bill said.

He explained that a toxic kitchen environment is becoming a problem because staff unfortunately knows that if they get fired today, they will be hired somewhere else tomorrow because jobs are in such high demand.

Drugs and alcohol are also a problem according to the other restaurant owners Moonshine Ink interviewed.

“We have lost five employees for drug and alcohol related problems,” Bill said he has had to fire staff for coming to work high and/or drunk — some have even walked about during service. Restaurants are being forced to look at creative solutions to combat this issue, which is only getting worse.

Since bringing on their chef Bill Arnoff 17 years ago, Pianeta has enforced a program where at the end of every month, if kitchen sales reach a certain amount, the back of the house gets a commission bonus.

Old Town Tap plans to enact a similar profit-sharing system in the coming weeks. “Investing in our employee’s worth is more important than investing in new equipment,” Bill said.

Bite employs its main staff full-time and only opens five days a week to ensure that its staff can perform at full capacity.

While the struggles of a restaurateur are never-ending in the fast-paced world of feeding people, at risk here is more than a few business owners’ future. The successful and healthy growth of Truckee/Tahoe could come to a screeching halt if new businesses and employees no longer come to town.

“I don’t see how we are going to be able to sustain new kitchens. Who is going to work there if the already established restaurants can’t find people?” Beckering said.

Back of the House in Dire Straits
Arts & Culture
All Day

Back of the House in Dire Straits
Sports & Outdoors / Wellness