Sara Smith clearly remembers attending 2016 meetings to provide community input to help Truckee apply to be among the first cultural districts designated by the California Arts Council. The goal, according to the council’s website, was to recognize and support “thriving cultural diversity and unique artistic identities within local communities across California.” Rallying local resources moved the town through an arduous application process, and Truckee was officially awarded the designation. Two years later, the ripples of impact keep growing ever wider.

An artist from Kings Beach, Smith’s involvement ultimately resulted in her spending the past year in the role of project coordinator for the Truckee cultural district. She is also co-chair of the Truckee Arts Alliance, a grassroots organization that brought together people and groups that were applying for Truckee’s cultural district designation.

“Leading up to the presentation [to the Arts Council] I was involved as a community member in the workshops,” Smith said, recalling one of the larger of such gatherings held at the Truckee Roundhouse makerspace. It was, she recalled, “an opportunity for everybody to get together and talk about the creative community.” The meeting provided the chance to share input, particularly regarding development of a cultural asset map, a required part of the application.

In 2015, the California State Assembly passed  AB-189, defining and expanding the California Arts Council. The council was tasked with designating official cultural districts throughout the state. Following the rigorous selection process, Truckee joins the Grass Valley/Nevada City district among only four rural communities in the first-ever cohort, giving Nevada County the ability to boast it comprises half of California’s first rural cultural districts out of the 14 total.

“It’s clear that Nevada County is a place where the arts are prioritized, celebrated, and uplifted, and we are proud to join local leaders in supporting these efforts,” said Caitlin Fitzwater, director of public affairs for the California Arts Council.

Eliza Tudor, executive director of the Nevada County Arts Council, was instrumental in procuring the distinction. Tudor told Moonshine Ink in an email that California Arts Council members have expressed that they are impressed with Nevada County leadership in promoting arts and culture.

“The significance of [being one of only four rural designations] shines a light on how successfully Truckee’s leadership — across all sectors — has been able to harness Truckee’s strengths, showcase Truckee’s cultural assets, and consider how a rural cultural district might differ from, and what it might offer, next to a metropolitan or urban cultural district,” she said.

Truckee, in fact, is in the company of city folk. Alongside the northern rural districts, eight of the cultural districts are urban and two are suburban. All of those are in the Bay Area, around Los Angeles, or in San Diego. This means that both of the only incorporated towns in Nevada County have been selected as cultural districts. Truckee is also a state-designated historical district.

Fitzwater acknowledged the challenges rural communities face with expanding and encouraging creative communities. “We know that in all communities, including our rural towns where housing and business space is very limited, artists are often the first to be displaced,” Fitzwater told Moonshine Ink. “We see the cultural districts as central to local strategies to combat displacement and preserve the authentic cultural and creative identity of communities.”

Fitzwater explained that the state council hired consultants Maria Rosario Jackson and Jessica Cusick, experts in cultural policy, to create a detailed program development plan after AB-189. They conducted interviews, surveys, and public input meetings to understand specific considerations, concerns, and opportunities for the development of the cultural district program. They also agreed on a set of values for the California Arts Council’s program, intended to create “authentic arts and culture opportunities, increase the visibility of local artists, and promote socio-economic and ethnic diversity through culture and creative expression,” she said.

So, with all this momentum for the arts locally and from statewide structures, how is this mountain town responding and embracing the moment? “It was obvious to all of us at the start that our creative community needed a focus, a place to be heard, to debate, to present, to strategize, to pull together, to find our one voice,” Tudor said, noting the distinction has been a motivator and a rallying point for Truckee’s artistic community.

She believes the development of a Public Art Master Plan by the Town of Truckee alongside the general plan update is a great step in the right direction in creating infrastructure for art. “As things stand just two years into our five-year designation in Truckee, we’ve been focusing on creating infrastructure, developing lines of communication between our key stakeholders, and branding,” she said.

But Tudor feels the impact goes far beyond the tangible steps the team has taken, and has encouraged members to “think big.” She said it “highlight[ed] the depth and diversity of our local artists,” supported Truckee Thursdays all summer, and allowed Nevada County Arts Council to partner with Truckee-Donner Recreation and Park District and Sagehen Creek Field Station to receive the biggest state investment of funds possible from the California Arts Council through its creative placemaking program, California Creative Communities. The lucky project to receive those funds is called ForestFire and will showcase local artists’ representations of fire. The project is in partnership with the Washoe and Nisenen Tribes.

Smith believes this distinction displays an institutional realization of the economic impact of creative industries, calling creativity “one of the hallmarks of entrepreneurial activity.” She cited a number of factors she believes made the Truckee application stand out, such as the historic downtown, its public art that even extends to the traffic roundabouts, strong nonprofit support for the arts, a varied artist community, and support for housing for artists like the Artist Lofts being constructed in the railyard.

“Within a very small geographic area we have an abundance of cultural assets,” Smith said.

“The natural environment and the existing role of artists in supporting the thriving downtown core were evident in the application process,” she said. “Our staff that visited Truckee for the application’s site visit noted robust community buy-in from various sectors of business and government, a strong sense of community pride, the specific strategies and vision to address achieving greater inclusion and diversity in future efforts, and the significant policy and development plans supporting affordable artist housing and workspaces.”

One big distinction between the three official partner groups and the Truckee Arts Alliance is that the Alliance has the capacity to advocate on a statewide level, and Smith and her organization have been working toward moving ahead on a number of bills and initiatives to allow for more institutional support for the arts. A big win for Smith and the Alliance was on June 28, when arts advocacy group California for the Arts (CFTA) announced the budget for 2020 will increase statewide art funding by $10 million, the largest state boost for the arts in 20 years. Julie Baker, CFTA executive director, said in a press release that the “creative economy represents 7.1% of California’s gross state product” and commends the governor for recognizing that.

The unofficial behind-the-scenes partner in Truckee’s effort to receive cultural district distinction is the Nevada County Arts Council, which serves as fiscal sponsor for the Truckee Arts Alliance. Truckee will benefit from the council’s charitable status, governance, and oversight.

Robie Litchfield, co-founder of the Truckee Arts Alliance and former co-chair of the Public Arts Commission, felt the team was pleasantly surprised to receive the cultural district distinction among such qualified applicants. “I think the crux of it is that we have a really vibrant arts community and it’s finally getting recognized and given the credit that it’s due,” she said. “This is the opportunity to show stuff off.”

Among the upcoming cultural events and collaborations that excite Litchfield is Fall Into Art, a series that will be put on by both the Truckee and Grass Valley/Nevada City cultural districts, featuring many coordinated events and activities by a collaboration of artists and art groups representing all mediums. Between September and October, programs and activities will include the Truckee Downtown Merchants Association’s Art & Soul ArtWalk and Truckee Public Arts Commission’s Fall Show.

Fall Into Art is based on the model pioneered by Artown, a series of cultural and art events in Reno that has grown from maximizing a modest initial budget and now operates under a budget of $4 million. According to Smith, Artown is a great model because it started with coordinating calendars and promotions of events already in existence until it started to expand and encourage new participants and ideas.

Nancy Tieken Lopez, local artist and founder of nonprofit Trails & Vistas, is a longtime major player in Truckee’s artistic community and is well aware of the current potential for expanded backing for the arts. She has had support from the California Arts Council since before the passage of AB-189 and the selection of cultural districts. While earning a Master of Fine Arts degree as a grad student at San Jose State, the council helped Tieken Lopez to obtain artist housing, and when she first moved to the Tahoe/Truckee area, she worked for both Glenshire and Kings Beach elementary schools under funding from the council.

In June, Trails & Vistas announced they had received a major grant from the council to expand their Art Walks and Dreaming Tree elementary student art in nature programs. The grant is a part of the council’s Creative California Communities program and provides funds for “creative placemaking projects” like the unique art walks that Trails & Vistas hosts.

“I was just moved to tears,” said Tieken Lopez, having benefitted from the council’s support throughout her entire career, and now living in a town that’s recognized by them as a cultural district. “Without [the California Arts Council’s] support I don’t think I could do what I do and I love what I do.” 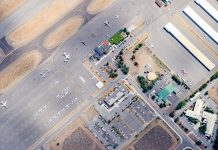 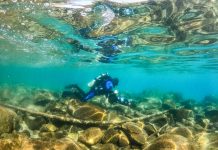 Why is it Taking so Long for AT&T to Remove the Abandoned Cables from Under Lake Tahoe? 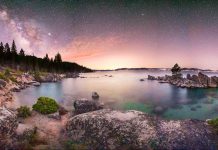