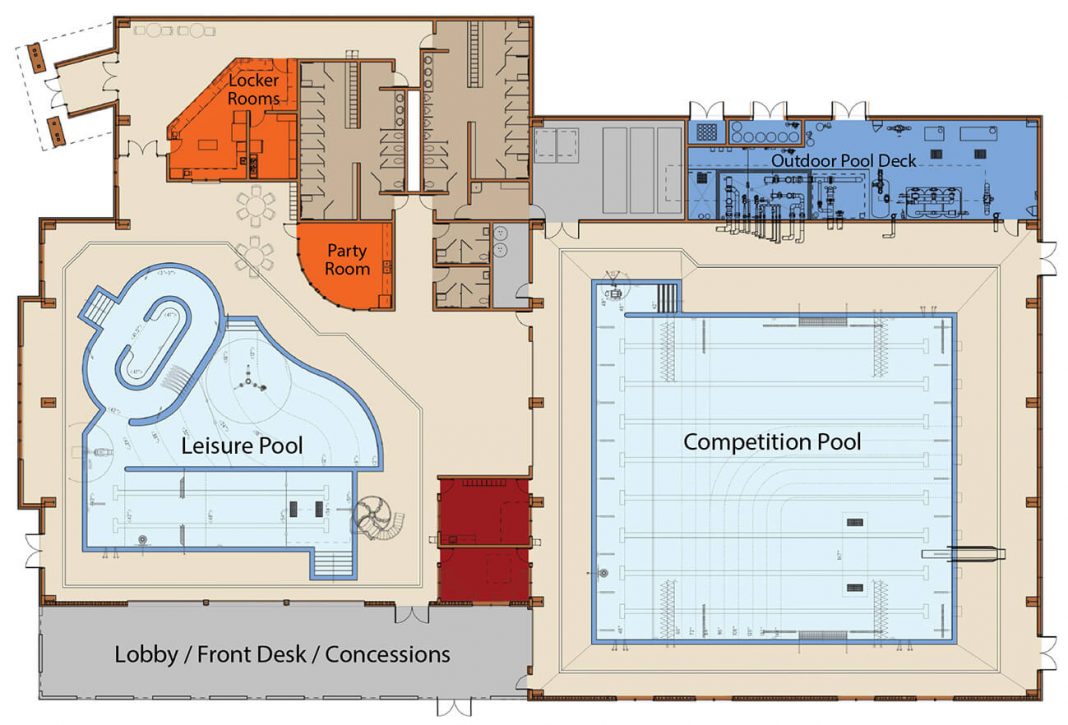 The $1 million recently raised brings the budget up to $6.7 million, which goes toward the construction of the 10-lane indoor lap pool, as well as a reception area, locker rooms, concessions, office space, and more for the 26,000-square-foot project.

After the Truckee-Donner Recreation & Park District received its second round of bids in early January, the project was still under budget by around $1 million, according to district board member Kevin Murphy.

They realized they had one month, from late January to late February, to secure this shortfall, or be forced to move to a third round of bids, a process that adds expenses. At that point, the district decided to aggressively pursue fundraising options.

“It was a one-time shot, and we went all out in that month to make sure we got it done,” Murphy said.

The TDRPD found $325,000 in reserves funding, without making any cuts to programs or services, according to Murphy. Additionally, the Town of Truckee agreed to donate $125,000 in grants, provided that the project would see completion.

The Truckee Tahoe Airport District also contributed $405,000. This donation stemmed from the aquatic center having to comply with certain building regulations like having to construct a roof that allows for emergency landings, due to the airport’s proximity to the center.

“The airport impacts the buildings around it, and we essentially funded the necessary upgrades through the property tax allocation that the TTAD receives,” said TTAD General Manager Kevin Smith. “It was very much in the wheelhouse and we are always on the lookout for projects that benefit everyone.”

After these donations, the recreation district was still $200,000 short, and discussions began between the TDRPD and Truckee resident Jim Morrison, who founded the KaWyHa Foundation for his wife and two kids who were lost in a plane crash in 2011. Morrison agreed to donate the remaining amount from the foundation, as a dedication to his family, and the million dollars was met just in time.

While this funding will ensure the building’s construction, a second warm water pool that was part of the center’s original design, still needs funding.

To do this, the TDRPD has launched a campaign on Indiegogo, a crowdsourcing website. They have already secured matching donations of $525,000 from the airport district and $250,000 from the KaWyHa Foundation. Now, $250,000 needs to be raised through private donations, as every dollar is matched by the KaWyHa Foundation, and then again doubled by the TTAD. The campaign goes until May 5. As of March 30 they had raised $53,455, which is 21 percent of the total goal.

This pool, with gradual “beach entry” access, will have a depth of no more than three feet, and a temperature of around 90 degrees. The pool will also feature amenities such as a current channel, similar to a lazy river, two 20-yard lanes for lap swimming, and spray features for children.

The TDRPD believes this second pool fills an essential need that can’t be accomplished with one lap pool. The second pool will focus on the needs of senior citizens, children, and rehabilitating athletes.

“We know our reach will go so much further with the warm water component. Having correct access and the right temperature is essential. If someone has a blown out knee or has had a hip replacement, for example, they will need the gradual entry,” said Amanda Oberacker, the district’s aquatic coordinator.

She also sees the need for a higher water temperature to support classes for senior citizens as well as for kid lessons, as the temperature of a traditional pool will be too cold.

If the funds are not met, the district will consider phasing in the pool in the future or have an indoor turf field in the allocated space. The TDRPD is strongly pushing to keep on course for the heated pool to be included with the initial construction, as the overall cost for the pool will increase if the pool is phased in over time.

“We are really confident about the fundraising efforts and that the pool will work out,” Oberacker said.

After years of planning, the aquatic center was approved by both the Truckee Planning Commission and the Truckee Tahoe Airport Lands Use Commission in late 2013. Then in the spring of 2014, the first bids for construction all came in over the allocated construction budget of $5.7 million, and none were approved. This forced a stripping of $1.5 million from the budget, which included cost-saving methods such as using concrete masonry units instead of steel for materials, and lowering the building site two to three feet.

In January, a second call for bids went out, and Reno-based Building Solutions procured the contract. Completion of the aquatic center is estimated to take nine months to one year.

“We are right at the finish line, and this is a chance I’ve never before seen in Truckee for the community to come together and secure a valuable resource,” Murphy said.

∼ To learn more about the aquatic center, visit the TDRPD page on Indiegogo at http://www.indiegogo.com/projects/truckee-aquatic-center