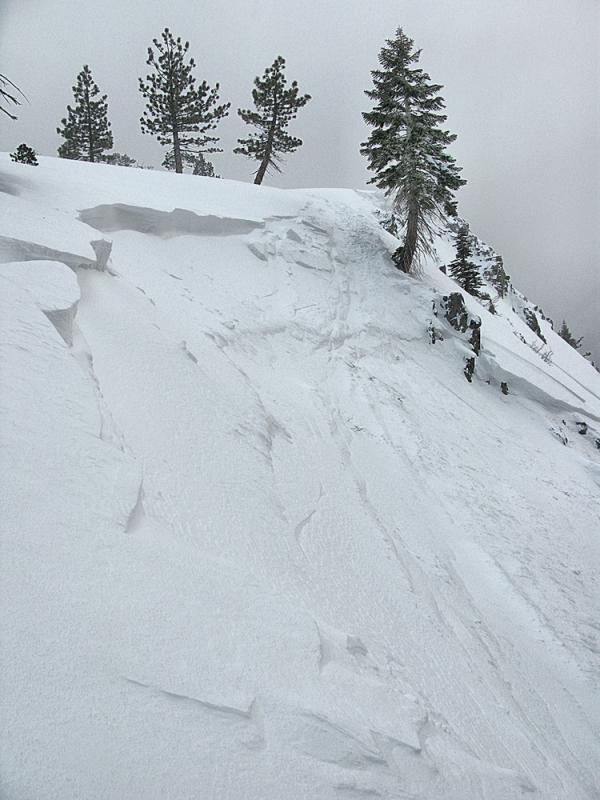 Talk to longtime Tahoe backcountry skiers and they’ll say that this winter has been one of the most alarming in recent memory. Shallow early-season snow cover and cold temperatures formed an uncharacteristic persistent weak layer deep in the Tahoe snowpack that lurked throughout the majority of the winter threatening large destructive slides.

This has all made for a strange winter a season where even the most experienced backcountry skiers have reexamined the mix of snow science education decision-making and gear that they rely on to reduce risk and stay safe. At the same time it’s been a season that has continued propelling backcountry skiing into the mainstream with more skiers on the skin track more gear to take them there and big brand names tapping into the booming backcountry market.

‘Backcountry skiing is the largest-growing segment of snow sports right now’ says certified AMGA ski guide Geoff Clarke. And the abundance of new improved backcountry gear available proves it. Your choices used to be limited if you were shopping for an avalanche transceiver. But today a consumer is presented with dozens of options from a four-antenna GPS enabled device to digitally enhanced probes to even a beacon on a different frequency for your dog’s safety. And if you’ve followed any ski-related blog or news media this year you’ve surely heard about the latest buzz-worthy avalanche gear: the airbag-equipped backpack which has been used in Europe since the 1980s but only recently entered the U.S. market. The technology allows skiers to deploy an airbag that is designed to keep them on top of an avalanche preventing complete burial and also providing head protection and visibility on the snow. Squaw Valley skier Elyse Saugstad credits her ABS brand pack with saving her life in Washington’s Stevens Pass avalanche which took the lives of three skiers.

Kings Beach retailer Tahoe Mountain Sports carried avalanche airbag backpacks for the first time this season selling the Mammut RAS Pack. ‘We sold a couple to early adopters in the beginning of the season’ says Tahoe Mountain Sports owner Dave Polivy. ‘Then the Stevens Pass avalanche hit and the national media grabbed on to it. Traffic to our blog posts and product pages increased 300 percent … We sold more than 10 avalanche airbag packs at costs of $900 to $1200 in the course of a three-week time period mostly due to the national media attention.’

Tahoe Mountain Sports plans to carry even more airbag inventory and brands next season and is the exclusive ABS airbag canister exchange center for Northern California.

Alpenglow Sports in Tahoe City has also seen backcountry gear sales rise. ‘We’re definitely seeing a massive uptick in interest and sales with that area of our business growing 70 to 80 percent’ Alpenglow owner Brendan Madigan says. Like Tahoe Mountain Sports Alpenglow started carrying avalanche airbag packs for the first time this season. Mammut ABS and Backcountry Access are some of the first brands to bring airbags to the U.S. market but more mainstream names like the North Face and Dakine are following suit next season with the North Face even integrating airbag technology into apparel. Look for the North Face Power Guide ABS vest this fall (a likely descendant of the snowmobiler AviVest by WARY cofounded by Squaw Valley avalanche forecaster Will Paden and patroller Tom Waclo and on the market the past two years).

‘I think airbags will be standard in the next few years’ Madigan says. ‘But really they’re just a tertiary safety tool. First is education. Second is good decision-making.’

We’re lucky here in Tahoe to live at a hub of avalanche education. Truckee-based Alpine Skills International has been offering avalanche courses since 1980 and helps develop curriculum for the first formal step in avalanche education: the American Institute for Avalanche Research and Education’s Avalanche Level 1. ASI is the top AIARE provider worldwide having taught more AIARE courses and students than any other provider. In addition to the heavyweights like ASI and the North American Ski Training Center in Truckee there are many other educators from Randall Osterhuber’s avalanche school on Donner Summit to Expedition Kirkwood as well as affordable options like Rich Meyer’s Industry Pro backcountry workshops and Lake Tahoe Community College’s AIARE certification courses. There are also many free resources to tap into like Squaw Valley Ski Patrol’s transceiver workshops held on the 1st and 15th of every month throughout the winter (see sidebar).

‘Enrollment has really gone up for us’ says ASI technical director Bela Vadasz of his company’s avalanche programming. ‘We teach more students in that area than any other part of our program.’

The Squaw Valley Avalanche Education Fund which has awarded more than 140 AIARE Level 1 scholarships over the past decade has also seen increased interest with 30 applicants this season. ‘The number of people applying is going up by the year’ says patroller Peter York.

Vadasz credits better gear and energy around the sport for the increased interest. ‘Gear used to be so crummy; nowadays it’s so much more supportive. It really gets people out into the terrain more quickly ups the learning curve … so avalanche education is really important.’

But avalanche education isn’t just a learned topic something you can master in your three-day AIARE 1 course. ‘A lot of the skills you learn crossover into good decision-making and leadership’ says Vadasz. ‘It takes a lot of backcountry travel and some years. I’ve been doing it all my adult life and I’m still learning new ways to look at things.’

One thing’s for sure: The interest has hit our community. ‘We used to be able to show up at the Jake’s parking lot at 6 a.m. and there’d be no cars. Now it’s full’ says Alpenglow’s Madigan. ‘I am seeing three/four/five times the amount of people in the backcountry than five years ago.’ People are self-educating and turning to valuable resources like the Sierra Avalanche Center whose near-daily snowpack observations and incident reports are invaluable to anyone heading into the backcountry. The Sierra Avalanche Center website is testament to Tahoe’s new backcountry stoke as it’s seen a 40 percent annual growth rate spiking from less than 90000 hits per year a few winters ago to half a million page views in the 2010–11 season.

But does all this interest mean backcountry travelers are more prepared? ‘Students are coming in with more basic knowledge’ says Vadasz. ‘But you can’t shortcut taking the time to experience that in different scenarios … Though people are coming with more skills there’s still a temptation on certain days to ski some things. A lot is about the human factor that goes into the decision-making process and who you choose to ski with on those particular days. It takes a while to really get your head right.’

TAKEAWAYS FROM THIS SEASON

Though avalanche fatalities and incidents seem to be more widespread in the media all numbers are near average.

At press time U.S. fatalities tallied 30 just over the national 10-year average of 28.5. But the 2011–12 winter season at Tahoe has certainly been abnormal as far as snowfall and snowpack are concerned.

‘What we’re used to in our Maritime snow climate is a lot of snow a lot of moisture and generally warmer temperature regimes’ Vadasz says. ‘Usually we have what we call a quick-to-rise and a quick-to-fall avalanche hazard typically during and shortly after a storm.’

But Tahoe has seen a shallow snowpack and some colder temps more indicative of an Inner Mountain or Continental snowpack which is more prone to lower weak layers that persist throughout the season.

‘I’ve never seen a persistent weak layer deeper in the Tahoe snowpack develop this strongly and stay this long’ Vadasz says. ‘It developed mid-January and it’s been with us here to this day.’

The overall trend this year is that ‘people are going after it a little harder’ according to Vadasz. ‘The skiing wasn’t that good earlier in the season so people are kinda jonsing for it; they’re jumping on things because they’re anxious. That’s when you have to just make really good decisions and to take the time to interpret the Sierra Avalanche Center advisories. Those guys do a really good job. Don’t just look at the color up top; read down deeper to the primary and secondary concerns.’

A Winter in Avalanche Country
Sports & Outdoors
12:00 am

A Winter in Avalanche Country