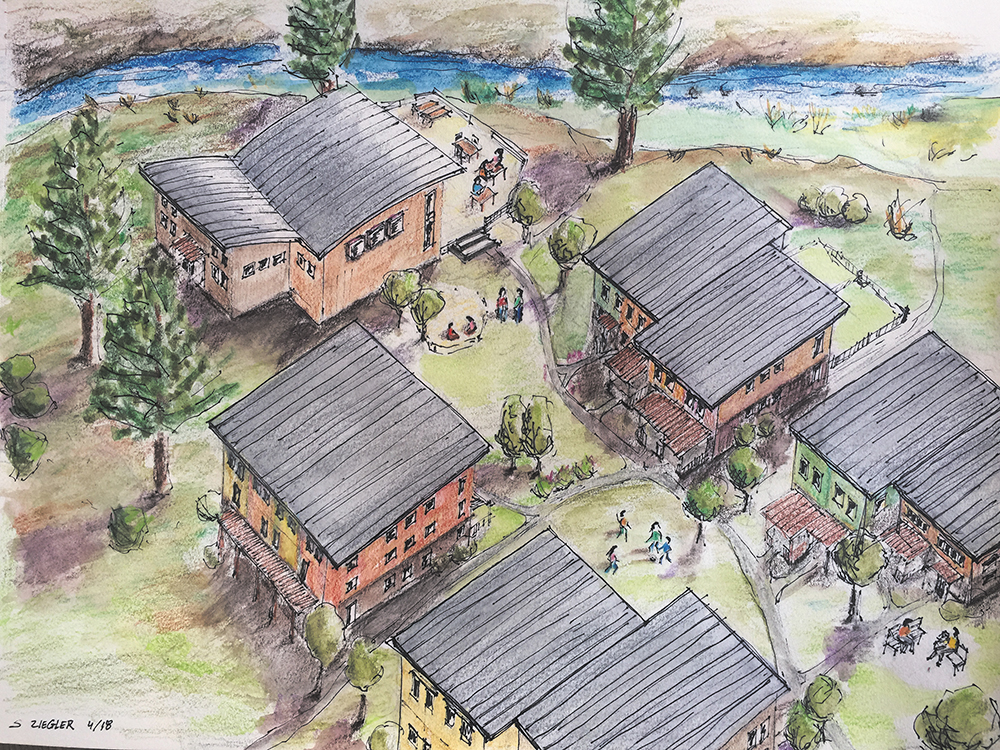 Correction: The Town of Truckee accepted a report from the Mountain Housing Council of Tahoe Truckee regarding expanding the definition of achievable housing but the Town has not changed its ordinances or policies to reflect the achievable definition.

When a system is put under pressure, it must evolve or falter. Such is the case with the local housing market. Thanks to an innovative community, current pressure has led to evolution. One concept gaining steam in Truckee involves a new way of living with your neighbors. Enter the Truckee River Village, a proposed co-housing center.

“The vibrant community life is really the draw at the end of the day,” project manager Jan Holan said of the development. The project currently plans for 30 to 35 housing units to be built on West River Street at the current location of Unique Boutique.

Co-housing is a relatively new idea; the term was coined in 1988. The loose criteria for co-housing is that it is co-developed, co-designed, and co-organized by the residents, has extensive common facilities that supplement and facilitate daily living, is designed to encourage community interactions, and is resident-managed (in this case in the form of a homeowners association). Co-housing is not to be confused with a commune, and there is no hierarchy in decision making and no existence of a sharing economy, according to information available on cohousingco.com. A primary goal of the project is to form a more sustainable community overall, using collective resources.

“I think the better way to describe co-housing is having all the privacy you want, but also having all the community you want very close at hand,” said Morgan Goodwin, a Town council member who is also an investor in the project. “We’ll be 35 homes, but we’ll probably own two snowblowers.”

A distinctive trait to co-housing projects, and to this one, is that future residents are the primary investors in the project. A minimum investment of $10,000 is required to become a member of the LLC in charge of the project, but some have invested up to $500,000 — all of which is a down payment on a unit in the village after building completion.

Holan said the group is in a purchase agreement with the landowner, CRB River Partners, and has raised about three-quarters of the funds needed to complete the sale. If all goes well, Holan says, there will be about a one-year time period between permitting and building. She estimates the project to be on a three-year timeline.

The development is not exclusively a co-housing venture, however, and other investors will be brought on to aid in other aspects of the project. In addition to the co-housing space, Holan says, there is also a plan to include commercial space with 25 to 35 achievable rental units, a wellness-oriented hotel and restaurant, and market rate condos. (The Town of Truckee recently modified its definition of  [accepted a report from the mountain housing council addressing the need for achievable housing to include moderate and above moderate income earners who are still unable to afford housing in the region, in order to address the needs of a demographic that’s being called the “missing middle.”) Holan views all of these other uses as opportunities to add to the nearby benefits of the co-housing area as well as to connect to the greater community.

“All of these uses are designed, the intention is, to work together to create synergy,” Holan said. “More and more, co-housing is recognizing that it can be really integrated into a community and help create a village.”

An integral part of the project is its location: just over eight acres on West River Street on the banks of the Truckee River. This area has long been marked as an industrial zone, but more than a decade ago the Town of Truckee recognized its potential as a community resource in its Downtown River Revitalization Strategy. The strategy was drafted in 2005 to promote redevelopment of that section of the river corridor, and proponents of the project say it fits perfectly with the Town’s visions.

One of those includes better connecting the relatively isolated industrial area with the rest of Truckee and the natural resources nearby. Holan says the group is advocating for a couple of pedestrian bridges near the property that would create a walking loop connecting it with the popular Sawtooth Trail across the river. One of the bridges is already a part of the Truckee River Legacy Trail Phase 4 plan, and Jessica Thompson, a senior engineer at the Town of Truckee, says the Town is currently in the process of applying for grants for construction of this part of the trail.

“Planting that seed on West River is huge,” Goodwin said. “We have a revitalization plan [for the West River area that] the community worked on in 2005 that calls for exactly the kind of thing we’re proposing; but that was written in 2005, and nothing, almost nothing, has happened with it.”

A Village from Scratch
Arts & Culture
All Day