Home Sections News A Tale of Too … Many Special Districts? 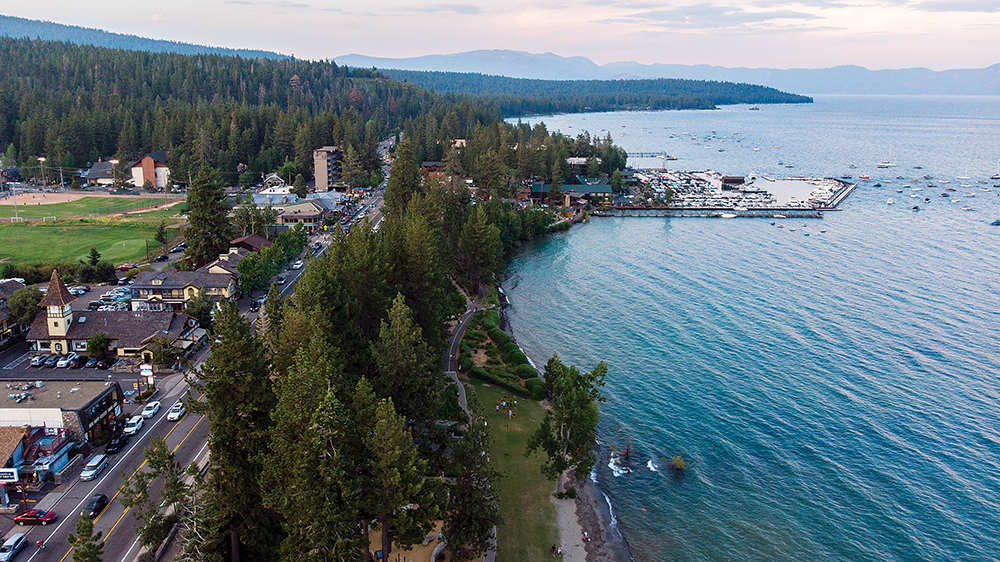 Local control and representation has long been entrenched in the politics of rural communities, and the mountain hamlet of Truckee/North Lake Tahoe is no different. Until the Town of Truckee was incorporated in 1993, the region’s governance was based entirely in the county foothill offices of Auburn and Nevada City — most still is. In order to establish more local control over a wide range of basic services, from fire protection to education, over 18 special districts have been created, starting 81 years ago with the Tahoe City Public Utility District. The result is a community with more say, but also a complicated heap of almost two dozen different tax- and fee-charging entities. If your head spins every time you look at your tax bill, you’re not alone. Here, we explain the purpose behind the region’s many agencies and districts, and how each has come to occupy a line on your property tax form.

What exactly is a special district? A Senate Local Government Committee report titled What’s So Special About Special Districts? makes the claim, “Most Californians don’t understand special districts. Most of us don’t know: How many exist (about 3,300). What they do (services from A to Z — from airports to zoos). Who runs them (maybe your next-door neighbor). Or even what they spend on local services (about $38 billion a year).”

To simplify this (sort of), special districts are highly specialized local governments with duties and regulations that vary widely, that tend to serve a specific geographic area. Most have publicly elected boards, such as Truckee Sanitary District, and some have boards with appointed members, such as the Tahoe-Truckee Sanitation Agency. Kristina Berry, executive director for the Placer County Local Agency Formation Committee (LAFCO), says all districts are subject to “principal acts” that govern the laws of each, depending on what kind of district it is. Fire districts have different guidelines than airport districts, water districts, or school districts, and so on.

“A special district can be anything from maintaining fire hydrants to a [community service district] which is essentially the same as a city, so there are a whole lot of different uses,” Berry said.

While the overwhelming benefit of special districts is more local control, one drawback of these many layers of government, according to Berry, is a tendency toward potential overlap in some cases. This is where LAFCO comes in, an oversight agency responsible for California’s 3,300-plus districts. Each county’s LAFCO office completes Municipal Service Reviews (MSRs) roughly every decade or so determining the efficacy of the region’s districts. If two districts are found to have exceedingly overlapping responsibilities or an outdated nature, one entity can annex another or the two can consolidate. The talk of consolidation is one that is brought up on a semi-routine basis in the large unincorporated area of North Lake Tahoe — buzz about combining North Tahoe and Tahoe City PUD has been circulating for years.

“There’s an assumed proliferation,” Berry said. “But in most places, I don’t think there are an overabundance of them.” She added that in the most recent MSR, which was released last August and covered many of the districts in the North Lake Tahoe and Martis Valley area, nothing appeared to be amiss with how the districts were operating. Aside from discussions about a possible consolidation of Meeks Bay and North Tahoe Fire Protection District, Berry said there didn’t appear to be any significant findings from the MSR.

“There are some districts that either aren’t doing a lot, or times have changed and they may no longer be necessary, and I honestly can’t think of any specific ones in our county but there may be one or two,” Berry said.

Consolidation isn’t unprecedented, however, and happens fairly regularly on a small scale. A number of annexations have happened in the region even in the past two decades, for example the Truckee Fire Protection District’s annexation of the Donner Summit Public Utility District Fire Department in 2006, or alternately DSPUD’s annexation of Big Bend Mutual Water Company in 2013. This is fairly common practice, but sometimes these kinds of consolidations can affect what shows up on your tax bill.

Special districts have an armory of different funding mechanisms depending on their purpose. Most rely on a ratio of service charges and property tax, the balance of which tilts widely from district to district. The Tahoe Truckee Unified School District, for example, is almost solely funded by tax dollars in the amount of just over $44 million in 2017. The Truckee Donner Public Utility District, on the other hand, accrues the lion’s share of its roughly $35 million budget through service charges to customers for water and electricity. According to TDPUD public information officer Steven Poncelet, the district is almost 100 percent funded by rates, which he says gives the district the benefit of having more control over its revenue stream.

Service charges are relatively straightforward; it’s a business transaction. But most districts operate off a combination of these charges as well as property and parcel taxes. This is where the cash flow gets complicated — especially post-Proposition 13. The 1978 bill intended to curb spiking property taxes capped them at 1 percent of the home’s assessed value two years prior to the bill. The year after Prop 13, special district revenues across California dropped almost 50 percent. Tax revenue growth since then has been almost linear, aside from recession-caused drops, due to a 2 percent yearly growth cap on the tax.

“What happened with a lot of the districts is before, they used to set those tax rates based off what their budget requirements were, now they can’t do that,” said Roxanne Nored, managing accountant auditor for Placer County. This is the reason for all those other charges that show up on your tax bill every year with labels like “voter debt,” “parcel charge,” and “assessment.” In order to keep up with rising budget needs, there were laws enacted to allow districts to make other yearly assessments.

“So that’s why a lot of the fire districts or the PUDs have an annual levy that they’ll levy per parcel that’s usually voter-approved. That’s another way for them to raise revenue to help their districts,” Nored said. These charges also help make up for the large amount of tax revenue diverted to former redevelopment agencies and the Educational Revenue Augmentation Fund that was established in 1992 to shift some of the financial burden for supporting schools away from the state.

When the lump sum of tax revenues finally finds its way into each district’s coffers, its genetic makeup may be very different than what is originally sent off to the county tax collector, but the totals are often close to the original 1 percent allocation (see table above).

How these revenues are used varies from district to district, but Nored says they are essentially “keep-the-district-alive” funds used primarily for maintenance and operations. The details regarding how the funds are spent is up to the district’s accounting principles, except for assessments and charges separate from the 1 percent tax that are levied for specific purposes. Other than the district’s own guidelines, Nored says she isn’t aware of strict rules on the use of property taxes, which for the Truckee/North Lake Tahoe region in fiscal year 2016/2017 totaled $110,399,532 in district revenues. The graphs on these pages show how this money is disbursed.

This pie chart shows how much of the Moonshine Ink office property’s 1 percent ad valorem property tax is allocated to each district — before RDA and ERAF adjustments. Due to the many varying district boundaries, and Truckee’s city limits, these percentages will vary, sometimes drastically, depending on what tax rate area your home is in.

A glance at a tax bill for any home in the region will echo the changes set in motion by the tax reform 40 years ago. The 1 percent ad valorem charge at the top of your tax bill is divided out in portions to the county, the town (if you live in Truckee), and all the special districts whose boundaries encompass your property, in ratios that were established in 1978. These percentages all vary from tax rate area to tax rate area and only change due to annexation of a district, such as the Truckee Fire Annexation mentioned in this story. Homes in Moonshine Ink’s tax rate area of 003-053, for example, pay 10.75 percent of their ad valorem to Truckee Sanitary District, while homes in TRA 003-015, however, would pay 10.42 percent.

As far as your total tax bill, one of the only things that will change the amount owed on a property outside of the 2 percent yearly increase is a change of ownership — which can affect the bill substantially as the property is reassessed at current market value.

It’s Different in Nevada
On the other side of state lines in Incline Village, the two main special districts, Incline Village General Improvement District and North Lake Tahoe Fire Protection District, have a different setup. They are both primarily funded by property taxes, but they are not restricted to a 1 percent rate, and the percentages change from year to year. NLTFPD levied a tax rate of .3057 percent in its 2016/17 budget, and IVGID budgeted for a rate of .1224 percent in 2017/18, which had increased from .1182 the year prior.

Getting a handle on property taxes that are divided between the region’s special districts is not quite as simple as it appears here. These figures show the amount of money allocated to each district BEFORE portions of the funds are redistributed to redevelopment agencies (RDAs) and Educational Revenue Augmentation Funds (ERAF). Although they were officially dissolved by former Gov. Jerry Brown, the property taxes for any district in a redevelopment area are still redistributed to “former” redevelopment agencies to pay old debts and the remainder is given back to the districts. For example, in 2018/19, North Tahoe Fire Protection District lost $744,649 to ERAF and $1,063,873 was redistributed through former redevelopment agencies, with a relatively small amount being returned from the RDAs — this return amounted to something around $766,000 for all the districts in North Lake Tahoe last year. Portions given to ERAFs, on the other hand, are permanently redistributed. The numbers at the far right of this graphic show each district’s final revenues, supplemented by yearly charges and assessments.

A Tale of Too … Many Special Districts?
Sports & Outdoors / Wellness
5:00 pm

A Tale of Too … Many Special Districts?
Arts & Culture