There were a lot of people in Tahoe this past summer. And there still are. Many proclaim the time for shoulder seasons has passed now that COVID-19 has pushed people to work remotely.

In Moonshine’s previous article about summer’s COVID-triggered crowds, Is Tahoe Actually More Crowded Than Summers Past?, data presented a mixed bag. The report looked at short-term rental inhabitants, traffic counts, and wastewater flows, which showed visitation was seemingly down, but trash pickup and recreational shops — not to mention the anecdotal stories of streets and beaches busier than ever — touted a rise.

But if the data didn’t whistle the same exact tune as what things seemed, where were the people? As it turns out, many took to the woods. The Tahoe National Forest saw record-breaking capacity, both in organized and dispersed spots. Extra people in homes surely played a role in the overall uptick, too, especially since Moonshine learned that the original sewer flow data provided by the Tahoe-Truckee Sanitation Agency had some calibration errors.

With that all in mind, however, one point remains clear: There is no current data system in place to account for everyone.

Some data lags — for example, collection of the Transient Occupancy Tax is always a few months behind and only covers those staying in short-term rentals. The Town of Truckee and Placer County collect TOT taxes (ie. STR data) on a quarterly basis, thus numbers for July 1 through Sept. 30 won’t be available until the end of the year.

Sales tax in Placer County, potentially a useful way to know where and how many people are spending their money, is overseen by HdL Companies. That information has an even longer delay at six months. Plus, not everyone is buying something that’d feed into the sales tax data.

“It’s complicated,” said Steven Poncelet, public information officer for the Truckee-Donner Public Utility District. The Ink reached out to the TDPUD to acquire energy and water data as a way to catch more visitorship info, but Poncelet pointed to the unreliability of those sets. Water use in the summer isn’t accurate due to irrigation, he said; and energy use is dominated by the weather and economy.

Not only is the delayed data of the TOT, sales tax, and other information not helpful to leadership during an emergency, it’s also frustrating to community members who are seeing and feeling the heat of such a visitor influx.

Hence, our ongoing dive into the data.

In mid-September, the TTSA provided influent flow data for summer months over the past five years, the numbers showing a mostly downward trend in the amount of water swirling down the drain from showers, sinks, and toilets.

But after receiving initial data from the TTSA, Moonshine learned from Blake Tresan, general manager and chief engineer with the Truckee Sanitary District, that the TTSA recently underwent an influent water meter recalibration, meaning there’s an inconsistency between the 2020 and previous years’ readings.

TTSA’s Michael Peak, operations department manager, explained that when the influent water meter was first installed (a few years back — he didn’t have an exact date), it was done incorrectly and the readings showed what he thinks is an increase of 300,000 to 500,000 gallons per day. The recalibration, performed this past February, means the 2020 numbers originally given to the Ink are correct, but the previous years’ data wasn’t a fair comparison.

For example, the Tahoe City August 2019 average daily flow of .84 million gallons per day would be more accurately and approximately between .34 and .54 MGD. August of this year saw an influent flow of .86 MGD. 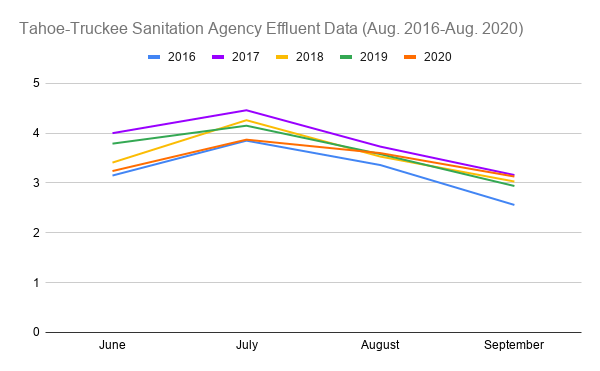 Effluent flow is the water leaving a treatment plan (once it’s been cleaned) via the Truckee River. This number, Peak said, would be more reliable than the recalibrated influent numbers. According to the graph below, which was aggregated using TTSA data, the summer months for 2020 started out the fourth-lowest in the last five years, and began to surpass other years by August. Come just last month, 2020 ended up as hosting the second-highest effluent flow count (just behind 2017).

The Truckee Sanitary District itself, which underwent a recalibration three years ago, saw 2020 numbers “really deviating from last year’s flows,” Tresan said — particularly during midweeks. On average, Tresan noted 10% to 15% higher flows midweek than in previous years. That midweek lift could be attributed to second homeowners staying for longer periods (a Tahoe Donner survey found that 12% of the 3,177 respondents in a recent survey were residents who don’t normally stay the full summer, but did so this year).

While many enjoyed summertime weather on the beaches of local lakes, others headed to campgrounds, formal and informal, to participate in their physically distant activities, and a significant uptick was noted here. The Tahoe National Forest experienced skyrocketing visitation this past summer.

The TNF analyzed occupancy for four campgrounds, and compared them between 2019 and 2020, from Father’s Day weekend through July.

Joe Flannery, public affairs officer with the TNF, explained that not only were most campgrounds 100% reserved over the weekends, many were also reserved midweek during peak season (June and July).

Kelli Hare with the Tahoe Truckee Sierra Disposal told Moonshine that part of the overall 2% increase in waste tonnage between July through September 2019 and 2020 is attributed to campgrounds. Residential neighborhoods, too, saw a rise; while commercial collection decreased.

Sporting shops selling outdoor gear have financially enjoyed supplying those keen to adventure, but are hurting for supplies. One worker at a local outdoor sporting store, who asked to remain anonymous, said this summer was the busiest he’s ever seen.

Sometimes, he continued, his shop even ran out of available bike rentals. Additionally, the shop didn’t receive the many bikes that’d been ordered. Even at the tail end of September, only a couple of bike orders had come in.

“We normally sell all our bikes at the end of the year, but we’re holding back because we don’t know if we’ll get any more,” the employee said.

It’s in the DNA

While the collection (and thus monitoring) of STR occupancy only comes quarterly to the Town of Truckee and Placer County via TOT, many community members have been pointing to AirDNA as a more up-to-date source.

AirDNA is a company that uses vacation rental data and insights to help subscribers understand their markets for STRs, specifically Airbnb and VRBO/HomeAway. The algorithm used takes into account 16 different criteria by looking at the historical data set, explained Kristina Sprindyte of AirDNA in an email. The criteria includes such markers as the length of the booking, the booking lead time, and the historical performance of the property. The algorithm has a margin of error of 5%.

Sprindyte told Moonshine that the change in booking behavior when the pandemic began worldwide took the form of massive STR cancellations or countrywide blocks to comply with government regulations. The company is still seeing fragmented responses regarding booking behavior.

“We have subsequently augmented this information with data partnerships and channel managers who see several hundred thousand reservations,” she continued. “This is the machine-learning component of our algorithm that continues to make it more accurate, to adjust for changes in booking behavior over time, for example, and ensures that our algorithm continues to be the most accurate on the market.”

Regarding Truckee’s overall occupancy rate, AirDNA shows a 67% increase between November 2019 and August 2020. Tahoe City had a 70% increase; Incline Village, 69%; and Kings Beach, also 69% — all during the same date frame.

The company touts an overall 5% margin of error, but Sprindyte said this number for the COVID-19 pandemic wouldn’t be fair to surmise internally at this point. Rather, she said that should be performed by an external company.

The Town of Truckee recently contacted AirDNA to better understand how the company acquires its STR data. Nicole Casey, finance manager with the town, said the town isn’t planning to purchase AirDNA insight at this time, but they’re keeping the company “in our toolbox of potential tools we have available.”

People still remain wary of air travel, though interest is slowly returning. Over the weekend of Aug. 17 this year, the Reno-Tahoe International Airport reported a 71% difference in its travelers compared to the same weekend in 2019 — from 2.5 million passengers down to approximately 717,000. By Sept. 7, it was a 64% drop.

The Truckee Tahoe Airport does not track passenger volume, though operations comparing August of 2019 to August of 2020 were shared at the Sept. 23 board meeting. Overall, there’s been a 23% decrease in operations this year when compared to 2019. When considering the stats and margins of error, Hardy Bullock, director of aviation and community services with the airport, said the numbers are relatively flat and unchanged.

“One piece that’s interesting is the size of aircraft,” he wrote in an email. “Our fleet mix size is up, meaning more of the total pie is occupied by aircraft that are larger than before. This makes me wonder if the aircraft load has more average passengers or is the larger aircraft being used to service further marketplaces or city pairs? Answers to these questions are hard to find here or at larger airports.”

There is a trend, though, Bullock continued: While there’s a reduced peak period volume, midweek travels have been more steady.

“Bay Area families that commuted by aircraft have moved here permanently which has decreased the daily milk runs to airports like San Carlos, Reid Hill View, and Palo Alto,” he wrote.

“All this data, none of it answers the question [of how many people are in town] directly,” said Poncelet with the public utility district. “Some of it might capture the day visitor and others wouldn’t.”

But the TDPUD is working with other agencies (Town of Truckee, the Truckee Sanitary District, possibly others) to get a better answer for understanding how many people are in the area at any given time.

Poncelet explained the agencies involved seek to combine all their data (car counts, sewer flows, TOT, water and energy usage, etc.), and then turn “to the engineers, statisticians, and analysts, asking, can we combine this data in a way this makes sense?”

The timeline for such a sought-after feat is months down the road. And whether it’s something the agencies could knock out quickly or not, Poncelet said he didn’t know.

This tag-team effort isn’t just related to knowing the COVID-19 crowds escaping to Tahoe for warm weather and the great outdoors; it has much more far-reaching and practical implications.

“From an emergency management standpoint,” said Robert Womack, emergency services coordinator for the Town of Truckee. “… if we know what our population loading is, it affects the hospital and how many people might show up there.” Emergency responders, the public utility district, schools — all entities that would benefit from knowing how many people are in town at any given time.

“In Truckee and Tahoe, where our population numbers change midweek to week, and they change season to season, how does that look if we have to provide emergency services?” Womack pointed out.