Home Columns In the Past A Progressive Jackpot 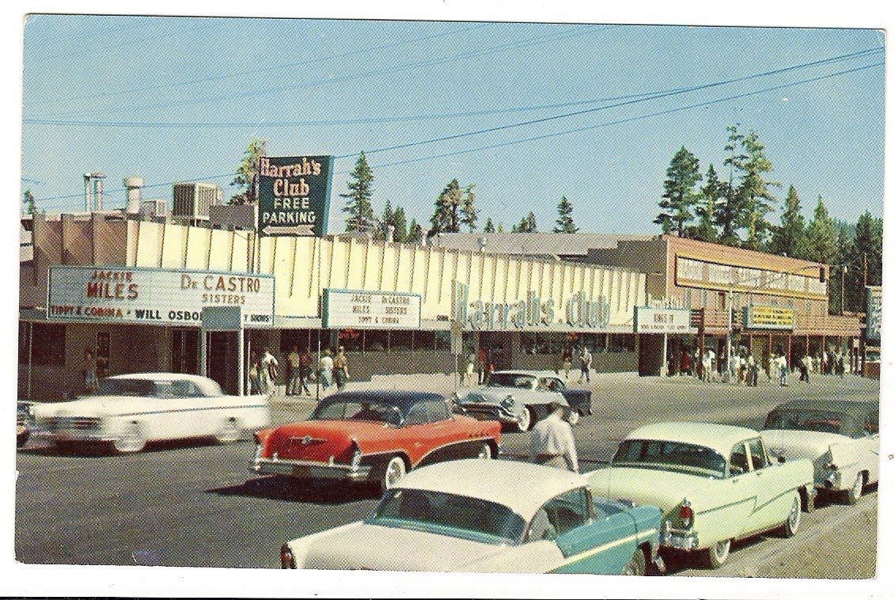 Once legalization of gaming in Nevada took effect in 1931, both the Las Vegas Strip and Reno experienced an instantaneous increase in commerce, but for Stateline, Nev., a burgeoning outpost on Lake Tahoe’s South Shore, there were some obstacles to conquer before it could become the gaming mecca it is known as today. Two men, who competed fiercely for market share, were instrumental in establishing the gaming industry in South Shore using ingenuity, problem-solving techniques, and fierce antagonism. If you’ve been to the South Shore, their names will sound familiar — Harvey Gross and William Harrah.

In the sleepy town of Stateline, a butcher from Sacramento named Harvey Gross opened a casino in 1944 and named it Harvey’s Wagon Wheel Saloon and Gambling Hall. Every day Harvey’s wife Llewellyn would cook a hot meal at their house and transport it to the Wagon Wheel to serve. The soon-popular joint had six booths, a few slot machines, and one craps table — it would have seemed more like a restaurant than a casino in today’s standards. Even though the Wagon Wheel was a humble establishment, Harvey had big aspirations not only for his business, but also for South Shore.

When Harvey opened his saloon, getting to South Shore proved difficult; in fact, the lake was only accessible from Memorial Day to Labor Day because of the lack of road infrastructure. During the winter months, tourists steered clear, and businesses had little staying power. Year-round clubs in Las Vegas and Reno thrived in the 1930s and ’40s, but around Lake Tahoe the typical lifespan of a business fell short of five years due to the brief season, according to a colorful picture painted in a 2001 book by Al Moe, Nevada’s Golden Age of Gambling. It was not until Harvey’s came to town that Stateline began to morph into a year-round destination.

John Packer, a longtime employee of Harvey’s, told Moonshine Ink that the Department of Public Works would not plow the craggy mountain pass of Echo Summit in the winter because it was too difficult. Harvey wouldn’t have it; he assembled a group of men and plowed the summit multiple times to prove that it could be done. The department begrudgingly obliged and started plowing the summit, which created a much needed accessibility upgrade.

William Harrah arrived on the South Shore scene as an experienced gambling industry business owner. The proprietor of a small club in Reno, Harrah noticed that even though his club was much nicer than those in Stateline, at the Lake Tahoe clubs excited crowds surrounded the gambling tables, three rows of people deep. Seeing that, he bought a place that was located directly next to Harvey’s Wagon Wheel: George’s Gateway Club. He renovated the entire building and opened Harrah’s Lake Club on June 20, 1955. By 1958, Harrah acquired another plot of casinos, Stateline Country Club and Nevada Club, and opened Harrah’s Stateline Club, which remains the location of Harrah’s today. Harrah wasn’t beating around the bush: He was determined to own a monopoly in South Shore, and Harrah felt as strongly as Harvey that the town had great tourism potential.

The two men, with neighboring casinos, competed fiercely and were always scheming the next best way to promote their businesses. During this time, advertisements of gambling were illegal in California, so both men had to get creative to draw customers. Harrah employed entertainment, built the South Shore Room, a luxurious venue that features a stage, and sank his money into bringing in musical acts like the famous Red Skeleton and Frank Sinatra. Harvey went the route of excellent food, knowing he could not compete with Harrah’s budget for entertainment. By 1947 he had added the Sage Room to the Wagon Wheel, and soon ramped it up to an award-winning steakhouse.

The rivalry even created mistrust among their own patrons. Harrah designed a bus program to shuttle up visitors to the lake from Sacramento and San Francisco and eventually the program flourished. A round-trip ride included a free chicken dinner and a bottle of champagne, according to Milos ‘Sharkey’ Begovich in Every Light Was On. In the beginning, it was about three chartered buses per day, but it then rocketed to 40 buses per day to Stateline. Harvey did not readily hand over all the glory of the bus program; he chartered buses to his casino too. The problem was both men thought their bus customers were going to their competitor’s casino. “It’s a joke now, but at the time it was a real serious thing,” said Begovich. Both bus charters started stamping customers’ hands to distinguish who rode which bus.

Competitiveness and ingenuity were characteristics both Harrah and Harvey possessed. Despite their rivalry they ultimately achieved the same goal — building a market that would maintain Tahoe as a visitor destination for years to come.

A Progressive Jackpot
10:00 am