Home Sections News A Dried Up Housing/Park Opportunity; Funds are Going Down the Pipeline 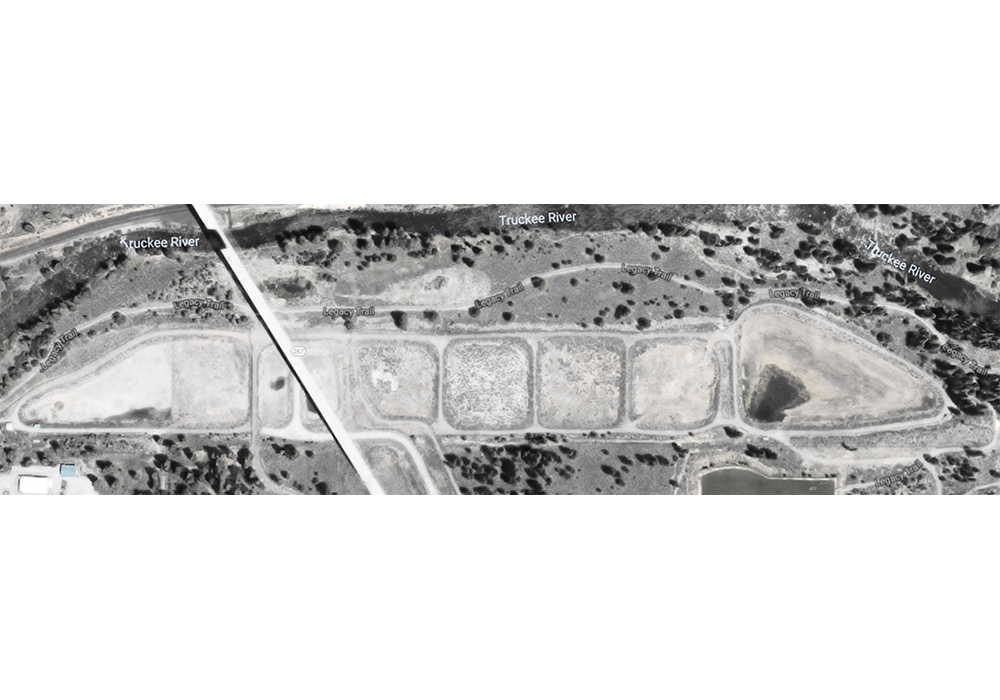 What’s up with the old drained ponds east of town and south of the Legacy Trail? What were they used for and who owns them? Can they be developed into something the community needs such as affordable housing or (useable) open space/parks?

The ponds are owned by the Tahoe-Truckee Sanitation Agency. State Highway 267 bisects the ponds and is subject to various reservations for the sanitation agency to access the ponds.

The ponds are the former Truckee Sanitary District sewage treatment ponds. In 1978, the Tahoe-Truckee Sanitation Agency took ownership of the ponds and currently operates and maintains them as one of the agency’s numerous facilities in its wastewater treatment process. They are used for emergency storage and to provide increased reliability to the agency’s conveyance and treatment process critical for protection of the pristine, sensitive Lake Tahoe/Truckee river environment during times of high flows, flooding, catastrophes, and other emergencies.

Unfortunately, the ponds cannot be developed for such needs as affordable housing or open space/parks because another use of the area would significantly impact the agency’s ability to continue protecting the community and environment.

In the Incline Village General Improvement District’s Utility Fund, $705,369 was listed as being spent on the Effluent Export Pipeline — pond lining. The Board of Trustees has not approved any contract nor was any money spent and no lining was installed at the pond. So what was the $705K spent on?

IVGID has an extensive capital improvement project program which includes a variety of projects related to our infrastructure. This question refers to one line item in the May 23 document report that has been updated (without title change) as of Oct. 5, and is available on IVGID’s website. The funds referenced in the question have been spent on a large multi-year capital improvement project, the Effluent Export Pipeline.

As part of the original Effluent Export Pipeline Project – Phase I, IVGID replaced approximately 6 miles of 16-inch export pipeline. In August 2009, a pipe break within the unreplaced portion of Segment 3 washed out state Route 28.

The proposed project, Effluent Export Pipeline Project – Phase II, will replace the two remaining sections of the pipeline within the Tahoe Basin (a total length of approximately 6 miles).

The wastewater treatment plant operates two large ponds/basins for emergency storage. The primary pond is the upper pond located directly south of the Wastewater Treatment Plant. This manmade basin is capable of holding approximately 2.8 million gallons. It is primarily used to store treated effluence during emergency periods when the effluent export system has been shut down for an extended period. The Nevada Division of Environmental Protection requires a lining of the upper pond; that work will be covered under Phase II.

A Dried Up Housing/Park Opportunity; Funds are Going Down the Pipeline
Sports & Outdoors / Wellness
6:00 pm

A Dried Up Housing/Park Opportunity; Funds are Going Down the Pipeline
Event Type / Food & Drink
6:00 pm

A Dried Up Housing/Park Opportunity; Funds are Going Down the Pipeline