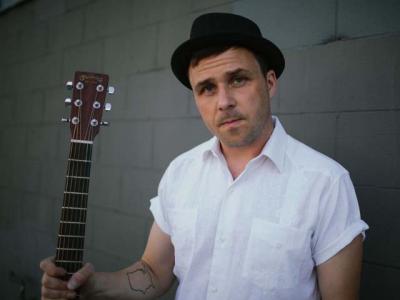 The Moonshot Coup and Studio on 4th present The Truth and Consequences Tour featuring Bryan McPherson, Josiah Knight, and Randall Wolf. In concert at Studio on 4th for one night only.http://bryanmcpherson.com/https://josiahknightmusic.bandcamp.com/releasesSinger Bryan McPherson has a tattoo of the unmistakable silhouette of United States of America on his right arm – the contiguous 48 states, at least. This may seem a strange idiosyncrasy for an artist who is largely considered a protest singer. Truly, McPherson pulls no punches when pointing out the darker side of his homeland, and given the dynamic, folk-punk delivery of his songs about the labor movement, race relations, income inequality, women’s rights, gay rights and other causes of the oppressed and marginalized, it is nearly impossible to not be moved by his message. His agile and shouted tenor, uptempo guitar playing and frenetic harmonica accompaniment are reminiscent of an amped up Woody Guthrie – or maybe Dylan on speed – and McPherson is fearless about taking his message to the people, logging thousands of miles playing solo shows from coast to coast and sleeping in his van along the way. If there is a salient criticism of modern activism it is that it lacks heart and focus, but Bryan McPherson has both of these things in spades – because it’s when he slows down his tempos, dials down his rage and delivers stark, first-person songs about love and the loss of loved ones that his strong, vulnerable and indelible heart shines through.

About Josiah Knight:
Josiah is a Reno based artist. Josiah is a truly special artist. His storytelling and soundscapes transport the listener to a world of colorful characters and fascinating scenarios. All the while, portrayed with a fierce realism and honest conviction. Josiah is fresh off the release of his album Bare Bones.

“With a great name for a folkie and a look to match with his big, black-and-brown beard, Josiah Knight has fixed himself as a popular local solo artist since arriving from Portland, Ore, in 2011. The 32-year-old has lived all over the West — accumulating experiences that play into his storytelling songs.

Knight picks his Taylor guitar with pretty patterns and sings, in a ruminative twang, poems of protest or hopefulness in the face of repression or gloom. In “The Ordeal,” his best-received original, he spins lines such as: “Kings always keep their magicians close to make peace with the ghosts. Know the rules and stay on your toes.” Michael Sion- Reno Gazette Journal

“Josiah Knight is a singer/songwriter with deep and dark songs that’ll haunt your soul.”

“Randall Wolf is a singer/songwriter out of Reno NV. While his songs reflect a wide range of influence from Americana, folk and country his hard strumming guitar and gruff vocals are indicative of the punk rock on which he cut his teeth. Randall continues to play in the Reno punk rock band Me Time.”
18 and over $8 in advance $10 at the door.