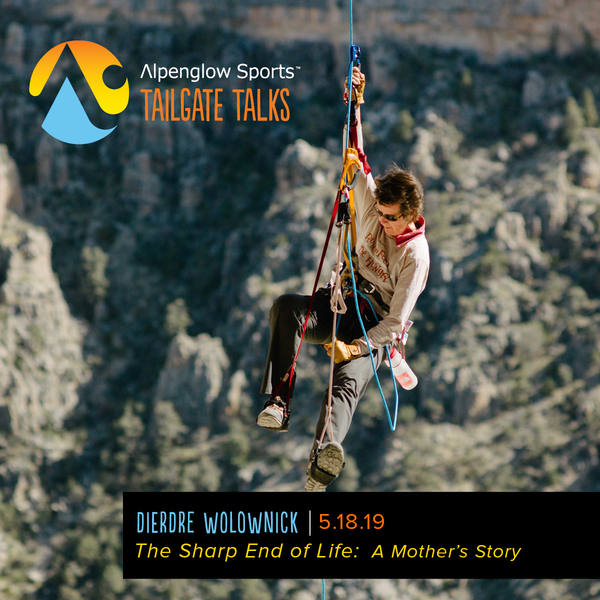 “On Saturday, May 18 th , Alpenglow Sports will host author and adventurer Dierdre
Wolownick for a reading from her newest book, ‘The Sharp End of Life: a Mother’s Story’, coming out in May 2019. Wolownick
will speak about her unusual life in which she left an unhappy marriage, raised two incredibly athletic and driven children,
and, at the age of 66, became the oldest person to climb ‘El Capitan’ in Yosemite National Park. Doors open at 6:30 and the
presentation will begin at 7pm.
Originally from New York City, Wolownick grew up in a family with strict ideas about how her life should play out. Her
marriage at a young age seemed like an escape from the life her family planned out for her, but as time went on she realized
her husband wasn’t the happy-go-lucky spirit she initially thought. Despite many lonely years of struggle in her marriage,
Wolownick found joy and wonder in her two adventurous and free spirited children, and she worked hard to enable them to
follow their passions.
Eventually, once her marriage fell apart and ultimately ended in divorce, Wolownick began to follow in her grown children’s
footsteps. With encouragement from her daughter, Kasia, she began running, and at age 54 began competing in marathons. She
then found her way into the climbing community at age 58 through her son, Alex. With the lonely days of her unhappy
marriage far behind her, Wolownick was welcomed into the climbing community, where she found the friendship and support
that she’d lacked earlier in life. This led to her setting a record ascent of El Capitan in Yosemite National Park as the oldest
person to ever climb it, at age 66.
Wolownick’s official press release sums up her book succinctly; “From confused young wife and busy but lonely mother to
confident middle-aged athlete, Dierdre brings the reader along as she finds new strength, happiness, and community in the
outdoors—and a life of learning, acceptance, and spirit.”
Join us on Saturday, May 18 th , to hear Wolownick talk about her extraordinary life, and how you are never too old to learn to do
something new. Doors open at 6:30 and the presentation will begin at 7pm. The event is FREE, but beverages will be available
for purchase, and all proceeds go to the Truckee Donner Land Trust. Wolownick will remain after the presentation for a casual
question & answer session and to sign copies of her book. See you there!”