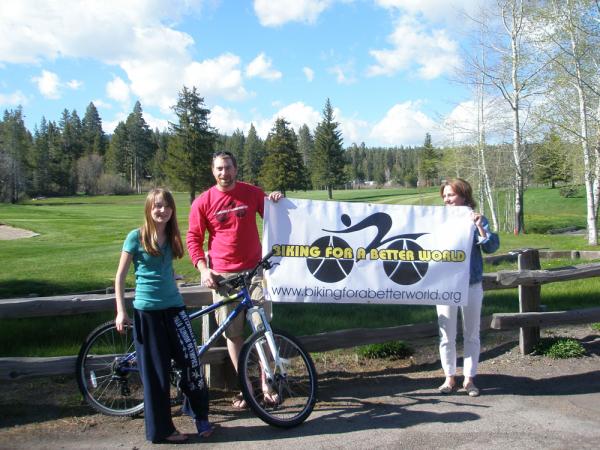 Since 2006, Biking for a Better World has been raising money to provide bikes to needy communities in places like Nicaragua and to other nonprofit organizations like Disabled Sports USA Far West. But after five years, Biking for a Better World felt it was time to start its own program. So in the spring it launched Writing for Wheels, a local school essay contest that awarded new bikes to the winners.

‘We wanted to give back to the local community that had been supporting us for the last five years,’ said Jake Spero, president of Biking for a Better World.

The contest was for students in 4th to 12th grade at North Tahoe Middle and High schools. Participants had to write a 250-word essay on one of two topics: What does a bicycle mean to you? or How can you use a bicycle to make the world a better place?

Biking for a Better World originally intended to pick a male and female winner from each grade. But since the organization only received submissions from 4th through 9th grade students, they decided to pick a total of eight winners from the 30 entries.

On June 6, Biking for a Better World announced the winning essays at a school assembly. The winners each received a new Kona Cowan Hardtail Mountain Bike. Spero said that most of the selected essays focused on using bikes to help the planet, as a form of exercise, and a way of getting to school. One of the winning essays, by 7th grader Lynne Hickman, stood out because she said she would give a new bike to a needy child. (See her essay below.)

Next year, Biking for a Better World hopes to expand the Writing for Wheels program to schools in Truckee, Incline Village, and South Lake Tahoe.

Biking for a Better World

By Lynne Hickman/7th grader at NTMS

Because I am lucky enough to have a bike, I want to give a bicycle to a needy child, so they can have a better life. Not only would a bike get the child active, but it would give them an escape into nature, something we all need to appreciate more. Just allowing this child a bike could shape them into a healthy person who will take care of others and our environment. A mountain bike ride in Tahoe allowed me to realize how amazing nature really is, and I want to give that to someone else.

A bike can make the world a better place. Not only does biking keep people out of their cars, it makes those people active and gives them a connection to nature. If I got the bike I would give it to a needy child and encourage local schools and businesses to allow and encourage their students and employees to ride their bikes to school. This would make Tahoe a healthier community with fewer polluting cars ruining our air.