Home Sections Sports and Outdoors View from the Top 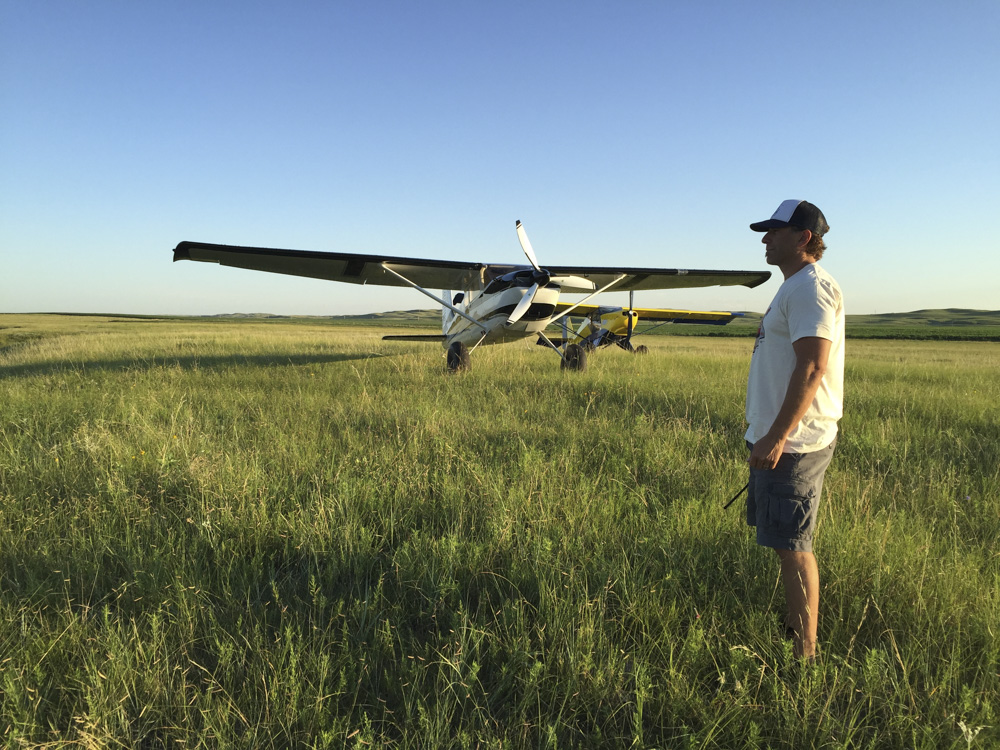 Kevin Quinn has an impressive resume. The former professional ice hockey player and parent of two runs Points North Heli-Adventures, a heli-skiing operation in Alaska, with his wife Jessica Sobolowski-Quinn, a professional skier. Quinn is also an avid backcountry pilot, is building his own plane, flies friends to Burning Man, and recently returned from AirVenture Air Show, an enormous aviation gathering in Wisconsin. After thousands of hours in the air, he is still just as excited to see his homebase of Tahoe and other locations from the sky.

What is the air show in Wisconsin all about?

It’s the largest aviation gathering on the planet, held in Oshkosh, Wis. Every aviation enthusiast and every pilot you can imagine attends. I got asked to be a part of the short take off and landing event, called STOL. They draw a line on the pavement and measure the distance it takes to get off the ground and the distance from landing to stopping. I was among 16 pilots around the country to be invited for STOL. I had no idea what I was getting myself into. There were 600,000 people that came for the week and 30,000 airplanes. They say an airplane lands every three seconds at Oshkosh.

Usually, I avoid pavement at all costs when I’m flying. I take off and land on pavement in Truckee but we go out in the Nevada desert and land on mountaintops and river bottoms and gravel beds and all the dry lakebeds and farmers’ ranches. It’s a different type of flying; it’s backcountry flying. And the cool part of this backcountry flying we do is it allows people to gain access to places where it takes hours to drive to and you could sometimes never walk to.

Flying in Tahoe is a big deal for a lot of pilots that come from all over, especially people that come from sea level. They say if you can fly in Truckee you can fly just about anywhere as you’re dealing with the mountains, the altitude, and the winds in the mountains. The whole nature of flying up here is different because of the altitude. The airport sits at 6,000 feet but on a hot day density altitude [makes it seem like] 8,000 or 9,000 feet. This decreases the performance of an aircraft. If you have a 235 horsepower engine it’s really more like 180 horsepower in the mountains.

You see it every summer where there’s a pilot that comes into Truckee and loads his family and his golf clubs and fuel and then has to land in Martis Valley. I’m big on trying to involve and educate people on flying in the mountains and the differences. Safety is the almighty concern.

What is the state of the aviation scene around Tahoe?

In a lot of communities around the country, general aviation is sort of dead, but in Truckee I feel it’s almost flourishing. The airport is doing great, and we have a local EAA [Experimental Aircraft Association] chapter. They have a strong influence on the youth and they have an adventure flying type camp for the kids. There’s also the civil air patrol that does a lot of search and rescue. And there’s the glider port that is active like crazy. Plus we’re close to Stead, Nev., which is home to the Reno Air Races, where guys fly old war birds from the WWII, Vietnam and Korean wars. The Reno Air Races are our version of the Indy 500. It’s the thrill of speed, there’s aircraft wingtip to wingtip going 400 miles an hour at that event.

There are huge opportunities, especially in Nevada with all the wide open lands. So we started the High Sierra Fly-in, a backcountry aviation gathering, which is now in its sixth year and it’s gaining steam. We had 165 aircraft last year coming from all over the country to congregate out in the desert. It’s an hour north of Stead, west of Black Rock.

What new spots would you like to fly to?

Locally you have the reservoirs but you have to make sure you have permission to access them. You can’t just go land on any given spot in California because of land ownership. Nevada is a little different with BLM land, you can access a whole lot. In California it’s just a matter of asking permission. I’ll drive around and look at a farm and go in and ask the guy and say ‘hey, you’ve got a great farm, I’d love to be able to land,’ and nine times out of 10 they will be more than happy to let me. Then when I go there I’ll bring them a case of beer or take their kids flying.

I saw somewhere that you fly people out to Burning Man?

I fly friends to Burning Man. I don’t charge them; we share expenses. Not something that I take reservations for or anything, but I’ve been flying a lot of people to and from there for 10 to 12 years. There’s an airport out there that’s run by the Burning Man folks that’s sanctioned by the FAA. There’s about 100 airplanes that fly into Burning Man. It’s a great place for aviators to go and land and do a lap and see 70,000 people on the ground. It’s quite impressive.

How are things going with Points North Heli?

We started in ’98 and this is our 18th year coming up. I leave the end of January and we are [in Alaska] until May. I feel very lucky because the support cast that we have are all local folks here. This winter will also be our 14th year being in Warren Miller films and we owe a lot of success to those folks. When we started, there were four outfitters up there and now there are 14 in Alaska. I tell people if they ask the right questions they will find the operator that suits them best, but we hope that they will come to us and we can entertain them. There’s nothing like riding a magic carpet to a mountaintop.

Anything else to add?

I’m big on the hometown community. I tell people if they have relatives in town or kids that want to go fly, I’m also a Young Eagles pilot so I can help with that. The program, through the EAA, introduces kids to aviation and they can look into our local chapter. I like it because it promotes aviation. We can fly kids all the time if they want to go. It’s something that I live to do on a daily basis. It’s pretty awesome to show off a bird’s eye view of this place we are lucky enough to live in. I feel lucky to give people that opportunity.

View from the Top
Education
7:00 pm