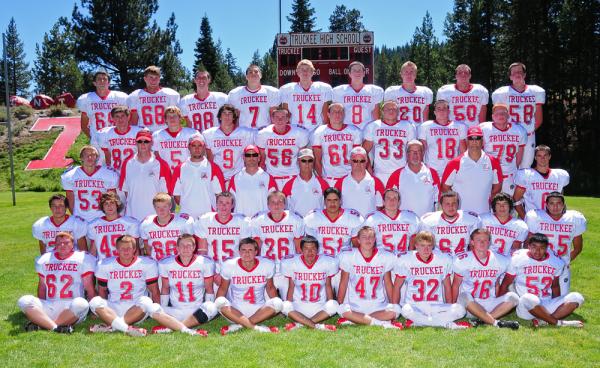 Yet another storied chapter was written in the local sports record books last month as prep teams from both North Tahoe and Truckee high schools were crowned 2010 Nevada State Champs. The winning teams were the North Tahoe boys cross-country team, the Truckee girls volleyball team, and the Truckee football team.

‘The reason we were successful was due to the hard work and dedication that we had put in all season,’ said North Tahoe Head Coach Warren Mills. ‘They were a confident group going into the state race and we knew we could run with anyone.’

‘Our philosophy was defense first, offense second, and we built our season around that,’ said Truckee Head Coach Erika Murphy. ‘We focused on conditioning that transferred to the court, things like quick-twitch muscle drills and defense response.’

The lady Wolverines finished the season with a 32–4 overall record thanks to the talents of seniors Allison Costa, Jillian Akers, Natalya Jones, and Kristina Tirman, as well as standout juniors Annie Reiswig and Kiersten Knoppel. Several of the girls also took top honors in the All-State voting as Akers won All-State Most Valuable Player, Murphy won Coach of the Year, and Reiswig and Knoppel made the All-State first team.

The Truckee football team steamrolled through another season, going undefeated (12–0) for the second straight year and winning back-to-back NIAA 3A State Championships. The Wolverines took the title, defeating Moapa Valley High School 27 to 7 on Nov. 20 in Las Vegas.