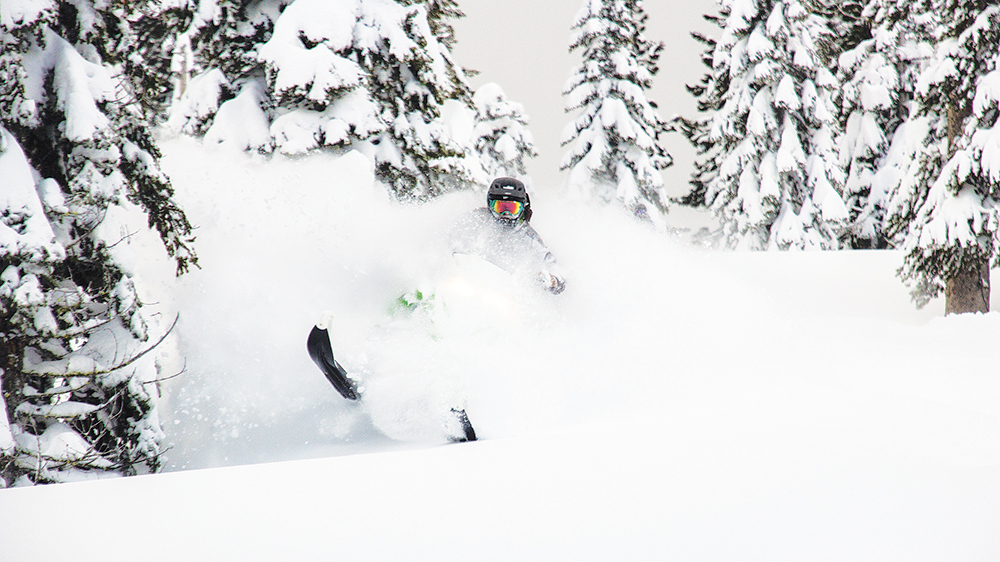 Castle Peak on a winter weekend is crowded madness for good reason: It has easier trails and slopes on the south side for snowshoers and entry-level backcountry skiers, while the rowdier north side, with its chutes and steep technical terrain, has been popular with skiers and snowmobilers for decades.

Due to 2013 court rulings, however, the areas open to snowmobiles may soon be changing, and not just for Castle Peak, but across the country. The iconic backcountry destination near Donner Summit is only one area but is a visible local example of a high-usage zone demonstrating a continued tension between different user groups.

In describing places like Castle, Tahoe National Forest Supervisor Eli Ilano says, “there are not many, but a few places where everyone wants to recreate on the same place at the same time on the same days, and they can’t have the experience that they want to have. And those are the places that we have to talk about and sort out.”

The 841,000-acre TNF — which contains Castle Peak — starts at Tahoe City and connects to Plumas National Forest to the north, stretches almost to the Nevada border to the east, and Nevada City to the west. With excellent and easily accessed backcountry terrain, the TNF is ground zero for a new chapter in winter recreation management.

An end to “Open unless posted closed”

In 2005 the Forest Service issued its Travel Management Rule (TMR); a nationwide review for off-road motorized vehicle travel in national forests for summer and winter. This rule represented a significant change to prior management by asking forests to specifically outline what terrain and roads were open. In previous eras of management, forests were generally considered as “open unless posted closed,” with the TMR flipping that around.

Subpart C of the TMR covered over-snow vehicles (OSVs, namely snowmobiles) and authorized forests to review and potentially change their OSV plans. But, the TMR didn’t require them to do so, as an exemption to OSVs was written into the rule. Winter Wildlands Alliance — a national nonprofit dedicated to human powered recreation — filed suit against the Forest Service, taking issue with the exemption.

They won in 2013, and the resulting legal agreement from the lawsuit amended the TMR by instructing forests to set specific OSV plans with deadlines. “The Court finds that the 2005 Travel Management Rule is arbitrary and capricious to the extent that it does not require designations for the use of OSVs upon the national forest lands,” wrote the Idaho judge for the case. All national forests with enough snow for OSV use were to begin the process in 2015.

Additionally, a separate legal agreement from WWA and nonprofits Snowlands and the Center for Biological Diversity, resulted in five national forests — Lassen, Plumas, Tahoe, El Dorado, and Stanislaus — to be required to review the impacts of snowmobiles under the National Environmental Policy Act (NEPA).

Currently, the TNF and the other four forests are at different stages of reviewing their management plans as a result of these two legal agreements.

The Forest Service marked alternative 2 as its preferred alternative, which reduces open OSV acreage by about 36 percent, equivalent to around 229,000 acres. The Forest Service noted of those acres, around 145,000 of them are below 5,000 feet, and therefore not an option for snowmobiling regardless, leaving 84,000 acres of rideable terrain that could be closed.

The snowmobile community, as represented by the recently formed Sierra Snowmobile Foundation, supports alternative 1. This option preserves the existing management, which was mainly established in 1990. “Alternative 2 is not a starting point, as we’ve already lost a ton of acreage with this option,” said Kevin Bazar, a member of the SSF.

The release of the DEIS was a marked point in intensifying long standing local disagreements between user groups. There were now tangible maps showing what could change. Newspaper reports of public meetings following the DEIS release reported heated public meetings, and the Forest Service having to disable comments from being shown online (people could still comment, just not publicly) because commenters were pulling emails off the FS website and issuing personal attacks.

The TNF now has a due date of Jan. 4, 2019 to release its final EIS and, following a 45-day period where objections can be filed — and barring legal action — it becomes policy. Therefore, it’s almost certain nothing will change for the upcoming winter.

David Page, advocacy director for WWA, contends that they are not out to take away snowmobile access, but that they support updating management under a rapidly increasing user base, and they want the Forest Service to follow their own policies from the 2005 TMR.

“All these groups are basically saying to the Forest Service is you’ve got to follow your own rules. You did it for summer now let’s do it for winter, and it’s in response to an ongoing lack of enforcement and lack of management,” Page said.

The snowmobile community feels differently and took action to counter these potential changes. They formed the Sierra Snowmobile Foundation in May to “protect and preserve snowmobiling in the Sierra Nevada mountains,” according to its website.

Among several points of contention, the motorized community felt the Forest Service process did not solicit adequate feedback from local OSV users, therefore creating the preferred alternative without proper input. Additionally, they are frustrated those pushing for further reductions aren’t local, and that they have successfully pursued litigation in the past to reduce snowmobile access. The Snowlands Network is based in Los Gatos, and Winter Wildlands is based in Boise, Idaho.

The Forest Service understands people may have felt left out of the process, but Joe Flannery, public information officer for the TNF, points out the two rounds for public comment periods and five public meetings, as some of the actions aimed to ensure ample time for feedback, and that the input from all user groups was incorporated into drafting the DEIS.

A commonly held notion is that there is plenty of space for everybody in the Tahoe backcountry, but Dennis Troy, president and founder of the SSF, says this is a misconception. He thinks the vast closed sledding areas around Tahoe go unnoticed, and cites the swaths of land where snowmobiling is prohibited — including all wilderness areas, most of the West Shore, certain areas around Mt. Rose, and more, as evidence.

Also, the numbers on closures, in terms of acreage, can create confusion. For example, currently the vast majority of the TNF is technically open to snowmobiles, but of note is a large percentage is below snowline, so the open percentage is seen as exaggeratedly high by snowmobilers. The reality, according to the SSF, is that across the entire Sierra Nevada range, 80 percent of the high alpine is closed to motorized use, with 90 percent closed above 9,000 feet.

Bazar notes that those who shrug off the proposed changes as minor closures are not the ones who deal firsthand with the regulations. “You don’t know how much is closed to snowmobiling until you own one,” he said.

The Tahoe Backcountry Alliance (TBA), a local Tahoe nonprofit which was not part of the litigation, also became more involved after the release of the DEIS. Board members David Polivy and Geoff Quine wanted to engage in discussions with snowmobilers and held a meeting in May.

The TBA supports alternative 2, with modifications. They proposed to keep snowmobiles off a specific section of the aforementioned steep chutes of north Castle, citing safety concerns, and to keep existing trailhead access open via the Donner Lake Interchange. As it is currently written, the DLI would be closed to snowmobiles if alternative 2 is selected, so the TBA felt this was a way to compromise and advocate for OSV-friendly policies in exchange for limiting a slice of Castle to snowmobiling (their comments to the Forest Service also included keeping access open in other areas of the TNF).

No agreement was reached, to the disappointment of the TBA. “If you truly believe that good is better than perfect, and realize we are pulling on the same public lands access rope, we can agree to disagree on some things, but still move forward on other things,” Quine said.

Members of the SSF feel this again exemplifies the sentiment that what some would consider compromise only looks like more closures to snowmobilers. Bazar said they were open to talks, but while the TBA originally presented themselves as having differing objectives for OSV management than Snowlands and WWA, this changed. He and the others at the meeting came to see their actions as being closely aligned with WWA, in particular.

Demonstrating this, Bazar noted the TBA sent out an email blast soliciting comments for the TNF the day after their meeting, with the link going to the WWA’s website, where users could submit comments through WWA. Upon seeing this, the SSF — which had thus far been in planning stages — decided to officially form.

TBA board member David Polivy said the form on WWA’s website, when examined, was in fact supportive of a different management than WWA. He acknowledges the TBA works with and receives support from WWA openly, but that they are “completely independent as a decision-making organization.”

All stakeholder groups mentioned while the actual closure areas are of importance, they are far from the only issues that face the Tahoe backcountry. They point to improved access, trailheads, and parking areas as major areas they hope will be more thoroughly addressed in the future.

Additionally, among the contentious debate, it can be forgotten that many people enjoy both motorized and non-motorized recreation. Some peoples’ mode of transport has been shaped over the years by things like injury, and many simply enjoy choosing one or the other on a given day, conditions depending.

This amounts to the Forest Service being given a high-stakes task. Highly aware of the passions of the user groups, Eli Ilano emphasizes the complexities of the process, noting it costs millions of dollars and extensive resources to go through the multi-year planning being carried out right now in TNF. Nevertheless, he believes in a positive eventual outcome.

“Most of the Forest Service employees live and recreate in this place as well, so we want to create a place that’s good for everybody, including ourselves. If you look over the entire 850,000 acres in the TNF, I think we are accomplishing that. There are going to be outstanding places to snowmobile, cross-country ski, and sled-ski,” Ilano said.