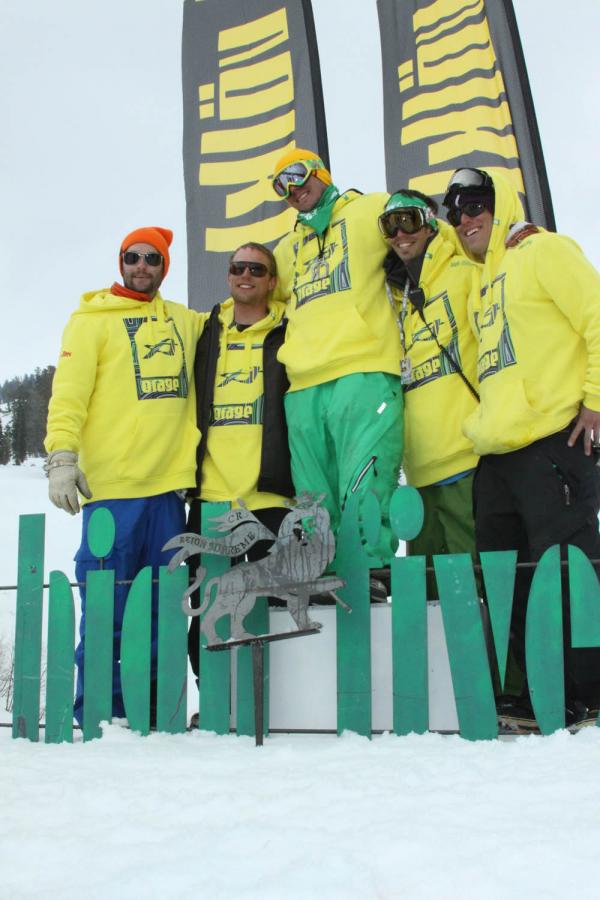 The moment Roy Tuscany came to, he knew exactly what had happened. There was blood everywhere, a Mammoth Mountain ski patroller was giving him oxygen, and he couldn’t wiggle his toes. Worst of all, his girlfriend was staring at him with a look of sheer horror on her face.

To be precise, Tuscany’s T-12 vertebrae had fractured into his spine when he overshot a 70-foot jump by more than 60 feet, landing in the flats feet first before tumbling feet over the back of his head, his skis slicing a major artery in his thumb. Forty-five percent of his spinal cord had been compromised. The radiologist at the Mammoth-area hospital told Tuscany that he would probably never walk again.

Tuscany was a coach at Sugar Bowl Academy and an up-and-coming new school skier who was on the verge of kicking off a professional ski career when the accident occurred in April 2006. Twenty-four years old at the time, the Truckee resident’s first thought after hearing the radiologist’s words were: ‘No, it can’t be. This is not how life was supposed to be.’

But Tuscany was wrong. It would take him almost five years to parlay his injury into a greater purpose, but Tuscany’s accident not only changed the course of his life, it has also changed the lives of eight others, with many more to come. Tuscany is the founder of the High Fives Foundation, a Truckee-based nonprofit organization dedicated to helping athletes in the winter sports community who have suffered a life-altering injury. Now in its third year, High Fives is riding high with a new office, full-time staff, and new ways to help seriously wounded winter athletes.

Tuscany first got the idea of starting a charitable organization while he was still in his hospital bed. In the first 50 days after his accident, several different groups of people raised money to help pay for his medical bills and rehabilitation. Sugar Bowl athletes raised $3,000, the Sugar Bowl community organized a fund for him, and his friends back in his hometown of Waterbury, Vt., raised $30,000. Tuscany wrote thank you cards, but felt that wasn’t enough.

‘I remember thinking, ‘There’s got to be more I can do. I can’t repay all these people,’’ he said. ‘So I started thinking about starting a nonprofit.’

But first Tuscany had to focus on his recovery. A four-hour surgery the night of his accident had left him with two nine-inch rods, eight screws, and two titanium wishbone plates in his back. After nine days in ICU and 45 days in rehab at Reno’s Renown, Tuscany was able to walk out of the hospital with the aid of a walker and a brace called an ankle foot orthosis. He moved back to Vermont, and then his progress stalled. Within two months, he was back in a wheelchair.

That December, Tuscany decided to move back to Truckee to work with legendary physical therapist Ladd Williams at the Tahoe Center for Health and Sports Performance. Tuscany had one major goal — to ski again.

‘Ladd told me, ‘You will ski, but not like before,’’ recalled Tuscany.

For the next year and a half, Tuscany worked with Williams for 40 hours a week, along with getting massage and acupuncture.

By March 2008, almost two years after his accident, Tuscany was ready to get back on skis, albeit with the use of adaptive poles. His first day was at Sugar Bowl.

‘It was so hard. I couldn’t ski at all,’ Tuscany said. ‘I’m a horrible skier, but I have more fun than anyone else on the mountain.’

Tuscany and his friends got the idea of throwing a welcome-back-to-skiing party for him at Sugar Bowl that included a ski contest. They called it High Fives at Sugar Bowl because Tuscany always gave his doctors high fives as a way to get them to warm up to him, and after his first day back on the slopes everybody congratulated him with a round of high fives.

With his goal of returning to skiing under his belt, Tuscany was finally ready to start giving back. In January 2009, he and a college friend founded the High Fives Foundation with a mission to raise money and awareness for critically injured winter sports athletes or those who are pursuing snow sports after an injury suffered in a different sport.

‘We liked the idea of paying it forward,’ Tuscany said. ‘So we paid it forward.’

The first athlete the organization helped was Steve Wallace, a former ski racer who suffered a burst fracture of his T-9 vertebrae while skiing at Squaw in April 2008, leaving him paralyzed. Wallace’s goal was to return to ski racing. In 2010, High Fives helped him to achieve his dream by paying for lessons at Disabled Sports USA Far West at Alpine Meadows, a gym membership, a membership at the Truckee High School pool, custom orthotics, and ski gear.

While High Fives raises money from private donations and memberships, its primary form of fundraising is through events such as the Squaw Valley Prom, the Trains freestyle ski contest, an annual bocce tournament, movie premieres, and the philanthropic photography event 3,000 Words. To date, the organization has raised almost $100,000 and financially helped eight athletes. It also manages the CR Johnson Memorial fund.

However, High Fives does much more than just give money to injured skiers for medical bills and rehab. It also provides an intangible asset. Grant Korgan, who broke his back while snowmobiling in March 2010 and became High Fives’ fifth recipient, said Tuscany’s encouragement and knowledge of the healing process was invaluable. Tuscany came to Korgan’s house in Reno every day to do physical therapy with him, cheer him on, and share what he knew from his own experience.

High Fives donated $10,000 to Korgan’s recovery to pay for his physical therapy, workout equipment, and walker. Today, 10 months after his accident, Korgan has been out of a wheelchair for three months and can walk with the help of Canadian crutches.

Tuscany was devoting 35 hours a week to High Fives on top of his full-time job at Mountain Forge and tutoring at Clever Minds. That all changed in November, when an anonymous donor gave a two-year pledge to cover the salary for Tuscany and another staff member, Adam Baillargeon, and pay for rent and utilities. High Fives moved into its new office in Truckee that month.

‘It’s amazing everyday to wake up and turn your passion and what you taught yourself through your own injury into employment,’ said Tuscany. ‘I always knew there was a reason why I got hurt, it just took me four and a half years to figure it out.’

With two full-time staff members, High Fives is now able to devote more time and energy to coming up with new ways to help injured winter athletes. The organization is in the midst of creating an online healing network, which will compile all the names of people and offices in the U.S. devoted to the rehabilitation process, such as doctors, physical therapists, spinal cord centers, and traumatic brain injury centers. It will also explain insurance jargon and have a link where people can apply for insurance.

On Jan. 11, High Fives released a one minute-long promotional video on YouTube, and sent it out to 1,000 people on their mailing list. Tuscany’s goal is to get 100,000 views by the end of the month. His ambitions don’t stop there. Tuscany also wants to provide funds to 15 athletes this year and go national by helping injured skiers all over North America. He is well on his way. High Fives helped its first non-Tahoe athlete this year — Landon McGaulley, a 15-year-old Canadian who was paralyzed in a mountain bike accident. McGaulley’s goal is to compete in the 2014 Winter Paralympics Games. High Fives has supported him thus far with a new sit ski, lessons at Disabled Sports, and accommodations at the Resort at Squaw Creek.

Tuscany, along with local paraplegic skier John Davis, will be the focus of a documentary, ‘The Push: To the South Pole,’ about their attempt to ski to the bottom of the Earth in 2012. Tuscany hopes the movie will inspire other disabled people to achieve their dreams.

So is Tuscany done paying it forward yet?