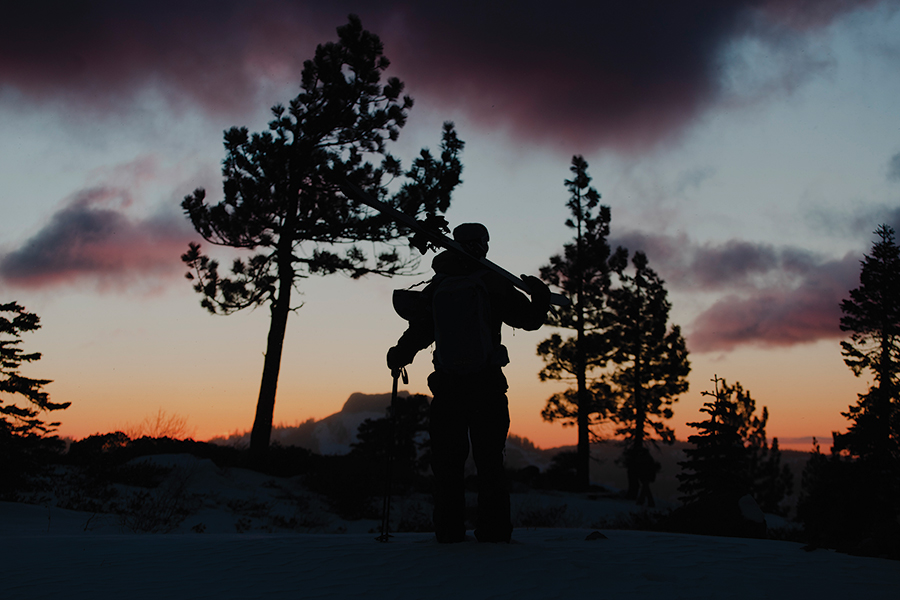 This little jumble of words is for all the crusty, jaded, uphill travelers reminiscing about the good ‘ol days. It’s for the salty dog at the end of the bar, growling about too many people on the skin track. It’s for the wide-eyed East-Coast transplants scribbling notes in their AIARE avalanche course notebooks, eager to open up a whole new world of terrain and possibilities. It’s for all those who haven’t gone rogue yet, but stand in the lift line daydreaming about finally ponying up and getting a split board.

Disclaimer: This story also uses data to make a point or two. Yes, boring old facts-and-numbers. Like the fact that over 1 septillion snowflakes fall on earth each year according to the internet, or that the number of telemark skiers has actually increased 40 percent over the last decade, as per an Outdoor Foundations 2018 Outdoor Participation Report — you free-heelers can use that last one to win a bar bet. Or, that while the number of people in the backcountry has apparently risen over the last 30-odd years, the number of avalanche deaths each year has actually stayed relatively level over that time.

It’s the decade of the twenty-tens and for the first time, some decent data is coming out of the backcountry — facts that can be used to win a silly argument about more people in the backcountry, help educate your own approach to touring and safety, or even draft a regional transportation policy around. I’ve blistered my fingers writing emails to collect it all — it’s back breaking work being a journalist — and now, how you decide to use it is up to you.

Education is the game changer

The backcountry is no longer off the beaten path — but this happened a while ago. The Snowsports Industries America (SIA) Winter 2017 Participation Report found that 2 million people explored the U.S. backcountry in the winter of 2016/17 — that’s more than twice the population of San Francisco out there trying to “escape the crowds.” Their data from about 10 years ago also hovered around the 2 million mark, but they classified most all those skiers as telemarkers back then so take that info with a grain of salt.

In the Tahoe region, the Lake Tahoe Basin Management Unit found there were 1.38 million user visits to its forests in 2015, with the largest percentage of those visits, 41.3 percent, being skiers. Sounds like a lot right? It’s actually less visits than the forest experienced in 2005: 1.51 million. Meanwhile, U.S. ski resorts have seen a drop of 7 million visitors in the last seven years, according to Kottke National End of Season Survey 2017/18. As one source for this story told me, such a drop is to be expected when you charge over $150 dollars for a day ticket.

What has increased rapidly over the last decade, however, are gear sales and avalanche safety awareness. Now we’re getting back to that little nugget of data you read a few paragraphs up about avalanche deaths. It’s from a letter to the editor in the Wilderness Medicine Society (WMS) journal, and it’s no accident.

Although the research attributes a possible cause to climate change — less avalanches in years with no snow — it cites the main reason for the flat rate of avalanche deaths as a growth in avalanche advisory resources, classes, and safety equipment.

“Avalanche education has skyrocketed in the last decade,” said Steve Reynaud, forecaster for the Sierra Avalanche Center. “The other part of it is the avalanche forecasting system in America has grown over the years, as well … we cover more ground now than we did in the past.”

The Sierra Avalanche Center was established in 2004 to bring greater avalanche awareness to the Tahoe region. The nonprofit soon established an online avalanche advisory for backcountry skiers to see the “avalanche forecast” detailing current danger in the backcountry and specific snowpack issues to watch out for.

In the last 10 years, visitors to the advisory have shot up from 137,139 to 672,800, with a high of over 1 million visits in the massive snow year of 2016/17. If Moonshine Ink’s website could get that kind of traffic spike in a year you’d be reading this on glossy paper. Tahoe is not alone with the huge increase in public engagement, and the WMS journal noted a 17-fold increase in use of the Colorado Avalanche Information Center’s resources. I attribute this to folks wising up to the fact that checking the avalanche advisory instead of Facebook before you go skiing could dramatically increase your lifespan.

Avalanche safety gear has also improved significantly alongside touring gear, but has the need for safety kept pace with the drive into the backcountry? SIA reported through its partner NDP Group that while backcountry gear sales in the U.S. (alpine touring boots, skis, and bindings) showed a near 30 percent increase from $18.7 million during the 2016/17 season to $24.3 million in 2017/18, avalanche safety gear (shovels, beacons, and probes) only increased 13 percent from $7.5 million to $8.5 million during that time.

One can only hope the trend toward safety

and education stays constant, because near the end of the WMS letter was the sobering thought, “if our fatality rate had stayed constant [since the 1970s], we might well be experiencing over 200 U.S. avalanche fatalities each winter.”

The other side effect of a crowded backcountry is a bit more boring than avalanche safety, but something anyone who has tried to skin up Jake’s Peak at 8 a.m. on a Saturday can sympathize with: parking.

Dude, where do I park my car?

“[Parking] is definitely not a new issue,” said Tom Lotshaw at the Tahoe Regional Planning Agency, about the SR89 Corridor Management Plan. When the TRPA and its partners in the plan — intended to address over-usage of the road during all seasons — released a survey with two questions asking, “what do you enjoy most and least about winter?” the two top answers were, unsurprisingly, “skiing” and “parking.” Also included on the list of negatives was “sometimes finding dog poop.”

Although parking has been a long-simmering issue, and the backcountry has been popular for much longer than just the last few years, it is just now that local entities are starting to gather data on the subject in earnest in order to draft management plans such as the SR 89 corridor plan, or the land use plans referenced in Moonshine’s October article, Uncertain Future for Snowmobiling. One of the issues in gathering data on backcountry users, however, is they are by their very nature, off the grid.

Lotshaw says one helpful — and unpredicted — resource has come in the form of an iphone app. Strava is an application that allows the user to track their routes, speed, and other stats in their outdoor pursuits, in order to share it as a “feed” on social media. Thanks to the eradication of privacy in the modern world (we’re watching you…) the app has recently created a Global Heatmap from all of its user data and some finagling of the resource’s settings can show a surprisingly accurate picture of access points into the Tahoe Backcountry. (Pro tip: It can also provide a good map of places to avoid if you’re not into crowds.)

Also getting creative is the Tahoe Backcountry Alliance, which started installing trail counters along popular backcountry routes two years ago. According to alliance board member Jason Layh the data is still in its infancy and cannot really be called “hard fact.” So, what loose facts did they find out? I don’t know. Although I called Alpenglow a half-dozen times to follow up with Layh. it seemed he was always busy. Must be all the new people buying backcountry gear.