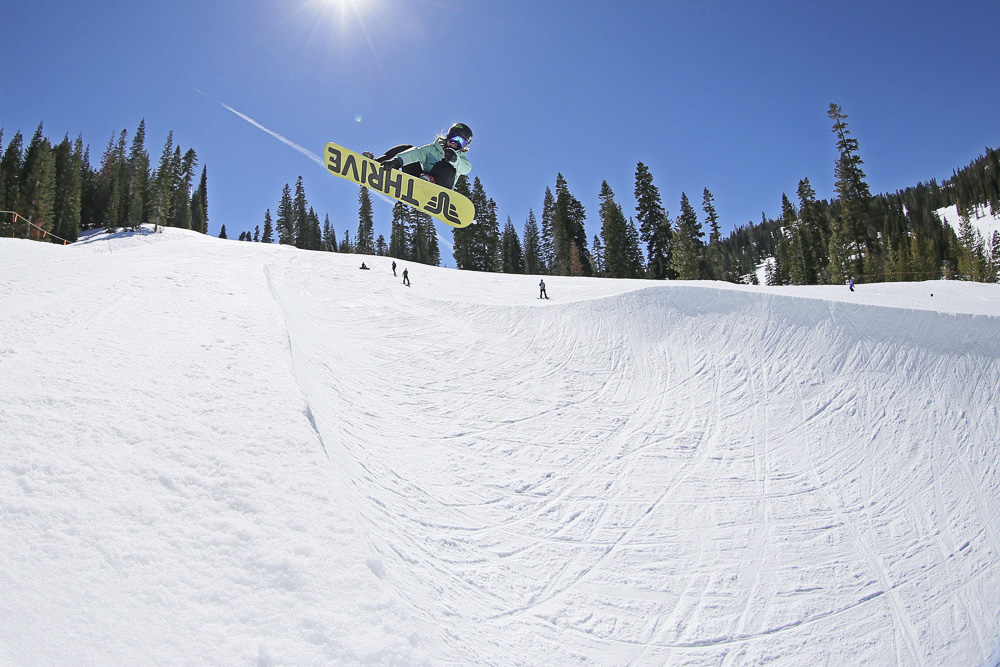 When Jay Quintin moved to Kings Beach in the ’90s he had $400 to his name and a sheet of acid. After eyeing the local scene he pressed his first board in a Truckee garage and Smokin Snowboards was born. That was over twenty years ago. Since then, Jones Snowboards and Thrive Snowboards have also chosen to call North Lake Tahoe/Reno home, and the three brands have carved out their place in a mecca for snowboarding and the culture that surrounds it.

Things have changed in that culture since Quintin pressed his first board. Economic downturn, growth of corporate sponsors, progression of film technology, and increasing popularity of the sport have altered the face of snowboarding not only in Tahoe, but across the sport. To understand this shift, and how the local board makers and the athletes who ride for them fit in the modern snowboarding world, we spoke with those athletes — the men and women who carry a quiver of boards either manufactured or designed right here in Reno/Tahoe.

JONES SNOWBOARDS (Based in Truckee)

Jones rider Sammy Luebke is a household name to anybody currently following the Freeride World Tour — he’s won the last two years straight. Luebke moved to Truckee from Alaska at 10 years old with his sights firmly set on snowboarding, and the dream payed off. It was the new millenium, and even a 10-year-old could recognize the importance of the moment; a time filled with legends pushing the envelope. The dog days, “when snowboarding was just a rebel sport, punk rock,” Luebke said, “snowboarding was all that mattered and we saw a lot of progression over the years.”

If snowboarding was on the periphery of the mainstream back then, it’s been fully blown out now. Exposure comes with a number of adjustments, and one of the major changes on the competitive front was the requirement of athletes to keep up appearances; to mind their P’s and Q’s, so to speak. When boarding became an Olympic sport almost two decades ago, the former rebel athletes were put under pressure to conform, and “wear certain gear, have certain stickers on your board, be respectful and represent your company well, and represent your country.” Lubke said.

Granted, the Freeride Tour is a far cry from what Luebke calls the “jock sport” culture of Olympic events like halfpipe and slopestyle, but it still has a worldwide audience. For the most part, though, things on the tour are still fresh and Luebke says that since joining Jeremy Jones’s team three years ago he hasn’t felt any of the sponsor pressure he endured with prior companies.

“I’m definitely getting more toward my trying-to-be-more-of-an-adult phase, but Jeremy and the crew [are] so laid back and they respect everyone doing their thing,” Luebke said. “Back in the day I’d say I had people kind of pressure me to do things, whereas Jeremy just lets me do what I want to do and same for the rest of the team riders.”

This is one of the benefits of riding for a relatively small company, a commonality shared by all of the local snowboard brands. If Luebke wants to chat with Jeremy Jones or any of the other folks at the company, he simply has to stop by West River Street. If he wants to test product, he has Tahoe’s mountains out the backdoor, and the world class big mountain terrain of the Eastern Sierra only a few hours away. And it doesn’t hurt that the man behind Jones Snowboards is one of the most iconic big mountain snowboarders of the sport’s history.

“[Jones] might be a smaller brand, less corporate, less money, but I think that’s better for snowboarding in the long run,” Luebke said. “When you can go take turns with your boss and he’s rippin’ harder than you, that’s a good thing.”

“Smokin is literally Jay,” Smokin rider Nial Romanek said of Jay Quintin, another rippin’ boss. “As far as I’m concerned I still feel like he’s stuck in the 90’s when he was coming up as a snowboarder. He still has that same mentality, he just owns a snowboard company now.”

Quintin manufactures out of Sparks now, a detail that certainly has its advantages in an industry where many products are built out of the country. Romanek can be testing a board almost immediately off the press and giving feedback to Quintin on how it rides that very same day. The unique thing about Quintin, Romanek says, is that he actually listens to that feedback. Rider input is not just a buzzword at Smokin, but a practice that Quintin takes to heart.

Romanek moved to Tahoe from “the land of the rails” in Minnesota to make a go of it in the snowboarding world after leaving an education in welding, and said the standout feature of the lake scene was its inclusiveness. In stark contrast to the percieved ego-driven culture of Squaw Valley skiing, the snowboard culture he witnessed across all of Tahoe was laid back, supportive, and anything but cliquey.

“When I first moved here I was blown away by the overall skill set of the people that rode out here, and also how inviting everyone is to people,” Romanek said. “Being from Minnesota and cruising out here, it’s very intimidating when you grew up on a mountain that has 300 vertical and the steepest run is a blue.”

So how does a midwestern street rider make it in Tahoe? The old fashioned way, according to Romanek, was film. “Filming a video part used to be one of the only ways to get media coverage before we had any social media,” he said, so athletes would compile their best clips from the year and try and get them in one of that year’s snowboarding movies. Then the economy took a digger in 2008 and social media exploded.

According to Romanek, the buy-in for an appearance in a snowboard film became ludicrously expensive as the ease of social media simultaneously changed the game. It’s the same across all snow sports; imagine trying to compete with Candide Thovex whose edits are funded by a German car manufacturer with a $200 million TV advertising budget. No love for the little guy.
“When the economy crashed, snowboarding took a dip and it hasn’t fully recovered yet. It’s been a lot harder for snowboarding companies to cough up that coin,” Romanek said. “Before you know it you’ve spent so much money on three minutes [of movie footage], and nowadays I just don’t think people have the attention span. They just go on Instagram and that’s all they really want to see.”

THRIVE SNOWBOARDS (Based in Truckee)

Thrive rider Joanna Dzierzawski is another midwest transplant, but what sets her apart from the other two athletes is that she never intended to go pro. She was just that good. Dzierzawski tuned her skills in what she calls the “U-ditch” back home near Chicago — as it would be a stretch to call what was there an actual halfpipe, she said — and after moving she quickly adapted to the features in Tahoe. She started out spending her days filming in the backcountry, and riding park in South Lake.

“I was one of the first girls to hit handrails back in the day, but it wasn’t cool yet so it didn’t blow up like it does now,” Dzierzawski said. By the coercion of some of her friends she sent edits in to potential sponsors, was signed on by RIDE, 686, and Heavenly Ski Resort, and began competing.

“All of the sudden I ended up in the Olympic qualifiers,” Dzierzawski said. She was on the road to Sochi for the Polish Olympic team, after recieving her dual citizenship, but injured her shoulder a year before the event. The combination of the injury and a disillusionment with the stress, rush, and grind of competitive touring led her to rethink her path. “I was very, very fortunate to do the road to Sochi, but it was also really, really hard … It was more a snowboard because you have to kind of thing, instead of snowboard because you want to,” Dzierzawski said.

Dzierzawski linked up with Thrive at roughly the same time she decided to start snowboarding because she wanted to again. Like Luebke and Romanek, she had spent the majority of her career riding for a bigger brand, and the transition to a smaller company provided unexpected benefits. The founder of Thrive, Douglas Fagel, is the executive vice president of the Professional Ski Instructors of America/American Association of Snowboard Instructors Western Division — a perfect fit for Dzierzawski, who said she’s never had a snowboard coach in her life.

These days, Dzierzawski said she enjoys her time on the hill as much as she did when she first started competing, and uses her more fluid schedule to balance riding and filming with running her own cleaning business in South Lake Tahoe — Joanna’s Cleaning Company. She’s watched the small competitions where she made a name for herself begin to disappear, replaced by larger events that are increasingly difficult to enter due to the lack of qualifying events. The level of competition has become more serious and the stakes are higher.

“The level of women’s riding has come a long way; I don’t want to be doing that. I want to be walking in ten years,” Dzierzawski said. Instead, she has her eyes on her backcountry roots, only this time she’s rocking a brand new Thrive splitboard.