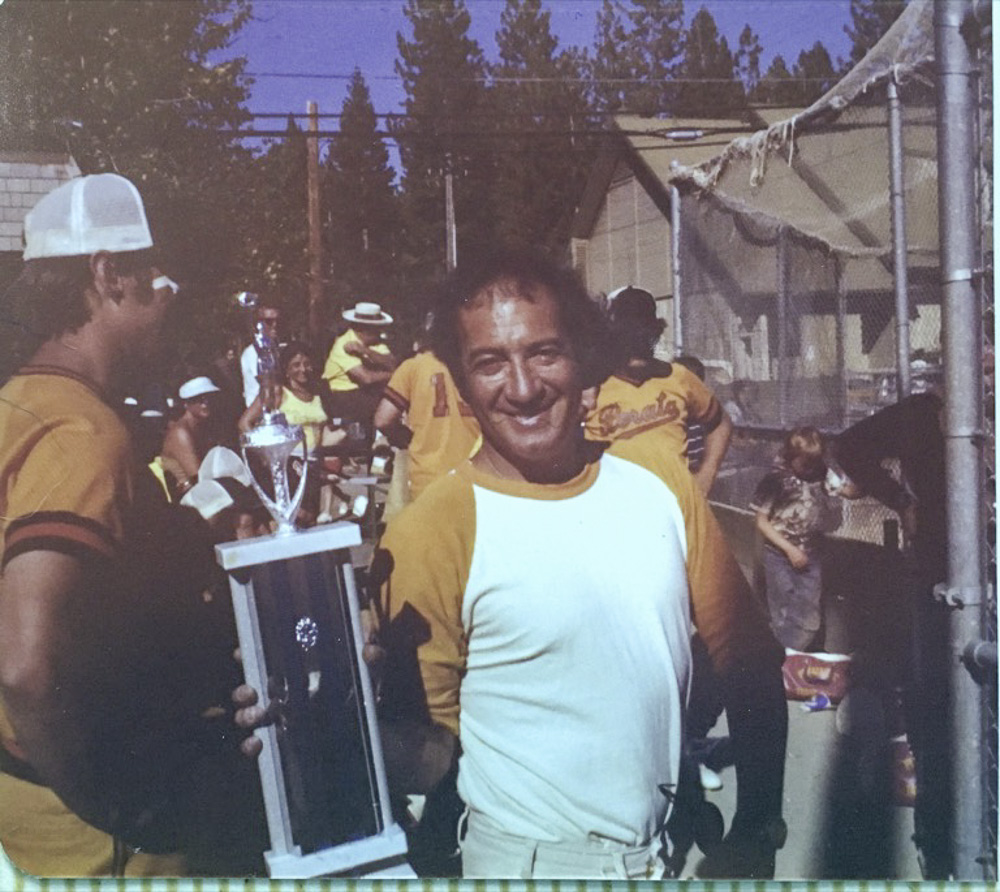 They came from the San Fernando Valley, the Bay Area, the beaches of Santa Barbara and the Sacramento Valley.

Many were ex-collegiate level athletes that mostly came to Lake Tahoe to swing hammers in the summer months to help with the area’s building boom of the 1970s. Some came to work and play in the snow.

But most of all, they were Tahoe’s “Boys of Summer,” a once-in-a-lifetime grouping of fastpitch softball champions, who kicked off a community sports renaissance in the basin.

“A lot of us came up here to work, but for me, I just enjoyed the laid-back lifestyle,” said Chendo Hernandez, who owns Mountain Lake Painting in Truckee. “We got up here, loved it, and never left.”

Originally from Ventura County, Hernandez was a standout quarterback who played football at Hayward State. He had pitched a little softball in his younger days, and by the time he reached the local area in the early 1970s, he had hooked up with Pete Perata’s Perata Excavating team.

“It was a lot of fun,” said Hernandez. “A lot of good memories.”

Hernandez took in a few games on August 5 and 6 at the Pete ’n Peters Classic tournament at Conners Field at Tahoe Lake School in Tahoe City. The tournament, co-hosted by Pete ’n Peters and the Colfax Recreation Association, is believed to be the first men’s fastpitch played in the area in nearly 25 years.

“It’s been a long, long time,” said Rod Collins, retired Tahoe City fire chief, who for many seasons played for Markstein Beverage and the Tahoe City Blues. “It will be great to see it up here again.”

While there were several top-notch fastpitch squads to come out of the Tahoe City region, including Pete ’n Peters, Tahoe City Golf Course, Scott Construction, Markstein, The Blues and Sub-Terra Construction, many of whom won Nevada state championships, it’s generally acknowledged that the Perata teams active from 1974 to 1980 were among the best.

The 1975 Perata squad, managed by Rod Stollery and Pete Perata, qualified for the American Softball Association (ASA) Nationals by winning the Nevada Regional tournament and advancing to compete in Hamilton, Ohio.

If there was any question as to whether Perata could compete on a national level, it was quickly extinguished when the Tahoe City softballers defeated teams from New Jersey and Pennsylvania before being eliminated in close losses to Indiana and Illinois.

Hernandez’ arrival in the North Tahoe area just happened to coincide with the boom that fastpitch softball was experiencing in the region.
Most team members had never played fastpitch before arriving at the lake, but baseball was in their DNA.

“I remember playing slowpitch when I first came to Tahoe City,” said Dale Wolff, who managed the Lucky Store in town and went on to play for Perata Excavating in the team’s salad days. “Fastpitch was just so much more fun.”

The late Steve Moore, who had developed into one of the most feared left-handed fastpitch hitters in Northern California, was a former third-round draft choice of the Los Angeles Dodgers and had played for four years in the Kansas City Royals farm chain.

In high school at San Marcos in Santa Barbara, Moore was a three-sport all-CIF athlete as a quarterback in football, a high-scoring forward in basketball, and heavy-hitter in baseball.

“We would just load up the girls and plan to spend the weekend at the park,” she recalled. “It was just what we all did in those days.”

Kenny Charles and Tim Feeley were Chadsworth High School teammates in the San Fernando Valley, who batted third and fifth, in that order. Clean-up? That would be future Boston Red Sox star Dwight Evans.

Charles went on to play college baseball at Sonoma State and now resides in Castiac, while Feeley just retired as a high school teacher and coach in the San Fernando Valley.

“It was by far the time of my life,” Charles said, looking back. “Lots of fun and good memories.”

The Perata players became household names, and it wasn’t unusual for 500 or more fans to flock to Conners Field for weekend tournaments.

Dwight “Big D” McCarthy was a San Jose transplant and Perata’s pillar of a backstop. He still lives in the area, where he sells real estate. Other standouts included Rich Miller, who was a San Francisco 49ers draft choice, infielders Bucky Whittier and Jeff Price, and outfielders John “Tinker” Ward  and Teddy Shreve.

Saying that the fastpitch scene was the golden era of community sports in the North Tahoe area would not be far from the truth.

“There was a time when we would have three to four men’s tournaments a year,” Pete Perata, who was the sponsor and manager for several years of the Perata Excavating men’s team, remembered. “Every weekend there was a tournament in Oroville, Chico, Stockton, or Colfax.”

After the Perata team set the bar of excellence at a high level, the Tahoe region produced other standout players in the form of Rob and Keith Walters, Dale Halter, J.B. Bechdolt, Bobby Haberger, Mitch Frazier, Kirk Hawkyard, and Matt Valenzuela, just to name a few.

“It’s too bad that fastpitch died out,” Pete ’n Peters owner John Rutter said. “It will be nice having it back this weekend.”

They Came from the San Fernando Valley
Sports & Outdoors / Wellness