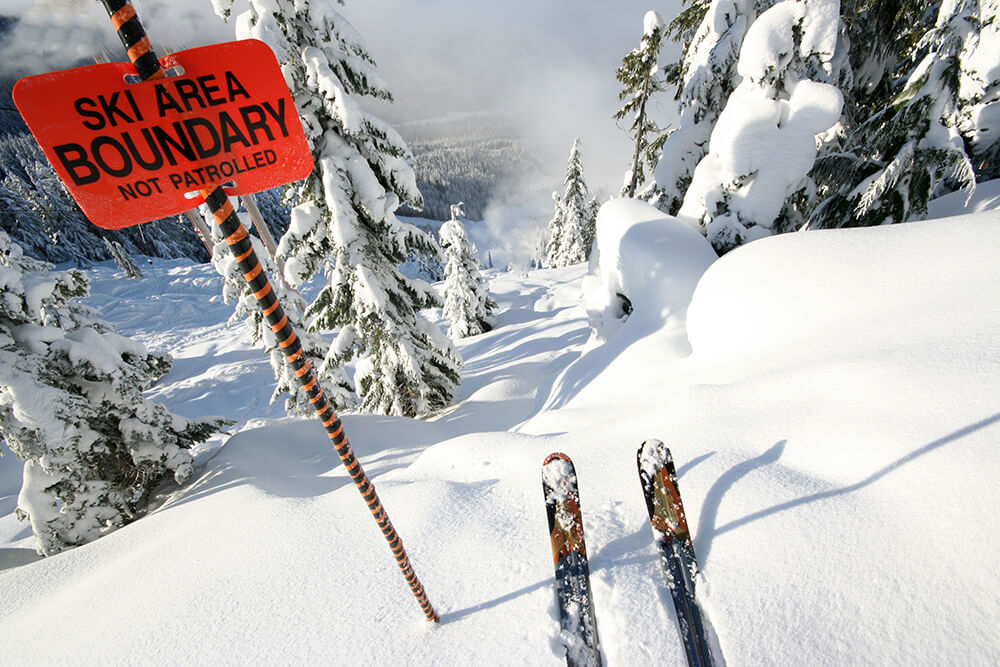 Anyone who has spent a reasonable amount of time in the mountains can probably remember at least a few times when they made a real bonehead move and got lucky. I’ve experienced at least a handful myself, but I can always look back at one crucial moment or decision that put me in harm’s way — raise your hand if you’ve ever ducked a ski resort boundary rope without a beacon on; now slap yourself in the face with that hand. Bonehead.

Even though the “sidecountry” — the out of bounds area surrounding a ski resort — may give the illusion of safety due to its proximity to controlled terrain, there have actually been more avalanche fatalities in the California “sidecountry” over the last 60 years than in the backcountry.
“It’s a false sense of security, I think,” said Randall Osterhuber, director of Donner Summit Avalanche Seminars. “You’re either in the backcountry or you’re not; you’re either on one side of the rope line at the ski area or you’re not.”
Even the term “sidecountry” has been shunned by the avalanche education industry because of the implicated connection to a ski area, and therefore the perceived safety associated with it.
“The avalanche industry has moved away from the term ‘sidecountry,’” said Steve Reynaud, a forecaster at the Sierra Avalanche Center and owner of Tahoe Mountain Schools. “Once you cross the ski resort boundary you are in the backcountry and a whole new set of rules applies. There is no avalanche control, rescue is not guaranteed, you need to be able to navigate, and choose terrain appropriately based on current conditions.”

A paper written by Reynaud following an unstable snowpack and fatality at Sugar Bowl last year — an incident which occurred outside the ski area boundary — makes the point that many skiers who access the backcountry from ski resorts have increasingly varied levels of avalanche education. Reynaud writes that many of these “sidecountry” riders enter the backcountry “on fixed-heel alpine gear or snowboards with no avalanche rescue gear and little to no education.”

Reynaud also mentions that this demographic is one of the hardest to reach with avalanche advisories, because those who regularly use ski areas to access backcountry terrain typically aren’t as entrenched in backcountry culture and might not be as familiar with its dangers. In the last decade, “sidecountry” went mainstream.

“I can tell you that back in the early ’70s, when I was working as a ski patroller at Alpine Meadows, you very seldom had people venturing outside of the ski area boundaries,” said Bob Moore, secretary of the Sierra Avalanche Center, who has more than 25 years of experience with avalanche forecasting and backcountry travel. “That’s obviously changed, and the advent of modern equipment is the driver on that. People are starting to realize how fun it is.”

In an effort to bring people safely into lift-accessed backcountry terrain, some ski resorts have started offering guided tours beyond their own ropes. Squaw Valley/Alpine Meadows recently teamed up with Alpenglow Expeditions to offer trips into the Munchkins backcountry at Alpine and Tram Ridge at Squaw.

According to Sean Kristl, director of sales and marketing at Alpenglow, for the first year of operation these tours will include all the necessary avalanche equipment without any added fees, and not include more than four clients or fewer than two guides. They will also focus on teaching backcountry rescue techniques such as beacon use and debris search patterns before and during the tours.

This does not mean, however, that Squaw/Alpine is promoting the use of their adjacent backcountry terrain outside of these tours and pre-established gates — especially at Squaw, where much of the backcountry is private property and therefore illegal to rope-duckers.

“Backcountry access gates and areas, when they are open, are provided as access points for experienced backcountry skiers and riders with the appropriate education, gear and safety equipment,” said Casey Blann, vice president of operations at Alpine and risk management at Squaw/Alpine. “Once outside our resort boundary, skiers and riders are operating at their own risk.”

Mimi Maki-Vadasz, co-founder of Alpine Skills International, has been guiding clients through the Tahoe backcountry since 1979, and began guiding lift-accessed backcountry tours on the backside of Sugar Bowl Resort in 2008. Maki-Vadasz says this was a time when the word “sidecountry” was taking off, and they originally marketed their tours as such.

“We quickly learned that the word ‘sidecountry’ really stimulated people’s curiosity as to a way to ski beyond the boundary, basically backcountry,” recalls Maki-Vadasz. “Once we were running the program we quickly realized that they are entering the backcountry and we needed to change the name right away.”

Maki-Vadasz’s lift-accessed program — now called Sugar Bowl Backcountry — prioritizes the safety of clients, and travels through the backcountry behind Sugar Bowl with the same level of safety they would use in any other backcountry terrain. Maki-Vadasz says she often starts with clients that have little experience in the backcountry, and before long they are signed up to the multitude of avalanche education courses that ASI offers.

The beauty of dealing with lift-accessed backcountry is there is a very black-and-white approach to distinguishing the danger of inbound versus out-of-bounds terrain. If you’re still curious about the distinction, take some advice from Randall Osterhuber:

There’s No Such Thing as Sidecountry
Sports & Outdoors / Wellness

There’s No Such Thing as Sidecountry
Sports & Outdoors

There’s No Such Thing as Sidecountry