Home Sections Sports and Outdoors The Spirit in the Water

Editors’ Note: Cold bathing and its health benefits can be achieved by almost everyone through practice, but please do not attempt these methods without becoming informed on the correct way to practice them. Prolonged exposure to cold without proper practice can lead to hypothermia.

Who The Heck Is Wim Hof?
Googling the Dutch “Iceman” Wim Hof produces iconic pictures of a half-clothed man sitting on a glacier with his eyes closed, deep in meditation and totally at peace. Hof is well known for 21 Guinness-record-holding feats involving heat and cold, and his research on the human body’s response to cold has brought about new ideas for using it as a form of therapy. He’s proven that exposure to cold positively impacts the body’s nervous and immune systems and its tolerance for heat and cold. It also improves brain function, and cures depression.

In the West, where we view cold exposure as sensational, it might look something like the polar plunge at your favorite winter sporting event. But for Hof, the process is methodical. It starts with calming the mind through rhythmic breathing or “breathwork” to achieve mental centering. Once calm, a person can enter a cold shower or body of water for just a few seconds at first, eventually working up to spending minutes submerged in the water.

The third pillar of his work, commitment, urges people to challenge the limits of their mind and bodies. This is the story of two Tahoe locals who have seen, through this commitment, how their lives could change beyond imagination. 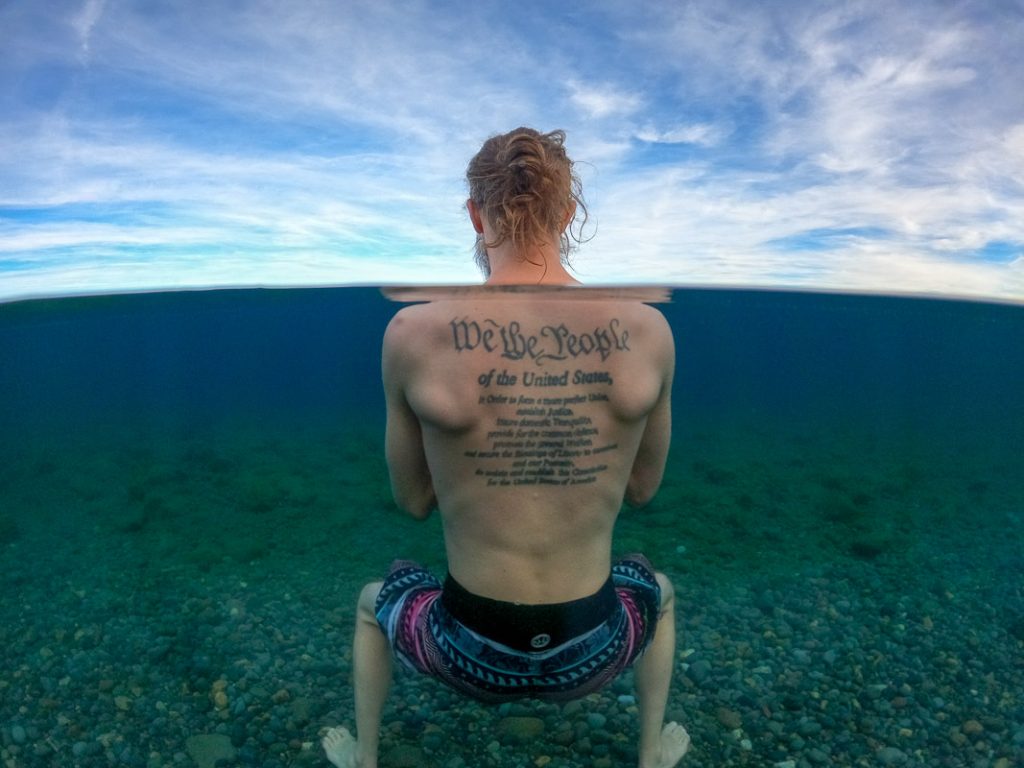 Forth From Grief
Comes Meditation
Longtime Tahoe resident Lorelei van Peborgh grew up loving the playful waters of Southern California. She’d heard about cold bathing while living in South Lake Tahoe and always wanted to try it. Her interest piqued after watching her German friend Felix go into his hot tub and then roll in the snow or dip into the frigid lake. He explained that he was raised with a much more open relationship with sensory input and learned early on to consider uncomfortable senses just another feeling.

When van Peborgh saw a documentary about Wim Hof, she was struck by his reason for starting the practice and thought maybe it would help her husband, Peter, who, like Hof, had depression. Yet she still wasn’t brave enough to try it herself.

Years passed and they enjoyed a long happy marriage and raised three children in the North Lake Tahoe area. In November 2020, when Peter died unexpectedly, van Peborgh was overcome with the urge to get into the waters of majestic Lake Tahoe. So she went to Kings Beach and began to walk in.

Wearing only a swimsuit, van Peborgh gave her grief to the lake and to her husband and asked for help.

“The lake is intense and miles deep and strong enough that I knew she would be able to take it all,” she said. “I knew I would be safe, and those feelings would be safe with her. I asked for strength to help take away the pain and to help me do what I needed to do that day. I just walked, one foot in front of the other… and I laid down and submerged and just lay there. I went in with such intense emotions, heartbreak, and intensity in my body, and when I came out, I have never felt that calm.” 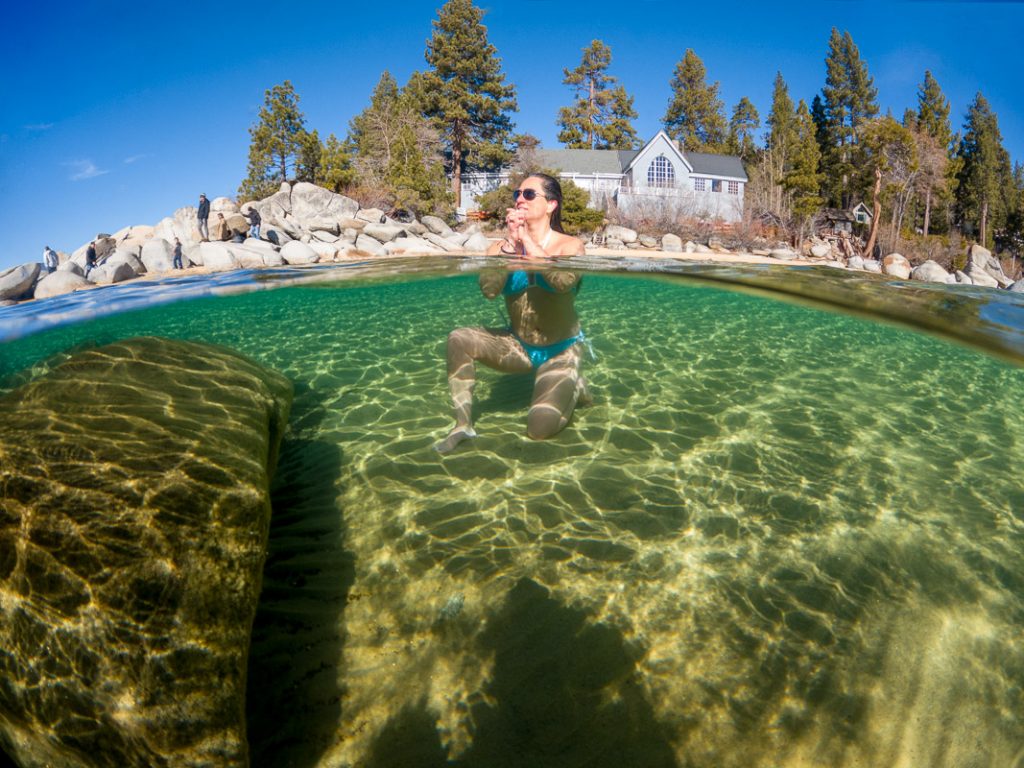 From that day on, she went in every single day for a month, and has continued to cold bathe every weekend since. When she looked at her Fitbit one day, she realized the cold exposure was literally lowering her heart rate. It has since also helped with inflammation in her hips.

“In the beginning it was definitely, ‘This is what I needed to survive,’ but then it got to the point that it was more of honoring my feelings and letting go of the week, and then it became a meditation ritual, like a reset but also a grounding,” she explained.

Before the experience, she’d tried meditation, Wim Hof’s breathing, and cold showers here and there, but she said the profound experience of bravery needed to actually get in the water changed her. Very early on, she thanked her husband for giving her that gift.

“That first step of ‘I’m going to do it’ is the hardest step but the most important of all,” she said. “I was brave enough to get past what my body was feeling. It became a base of knowledge for what I am actually capable of.”

The Yoga of
Pausing the Mind
Sean Collins’ wildly adventurous spirit and deep connection to nature are tokens from a life spent growing up in Truckee. During his college years, he left the area to seek something more fast-paced but was asked to slow down and reconnect with his deeper self through a series of events that changed every aspect of his life.

At 25, he was struggling with the Type 1 diabetes he’d had since childhood when his nerves from the waist down began to demyelinate. During this condition the myelin or fatty tissue around the nerves is lost. Without its protection, the patient endures everything from extreme pain to temporary or permanent loss of function in the affected area.

Suddenly, he could only barely walk with a cane. Eighteen months in, it still felt like his legs were “being tattooed” all the time. During the same period, his father was diagnosed with leukemia, calling him back to the waters and mountains of his childhood to become a caregiver. 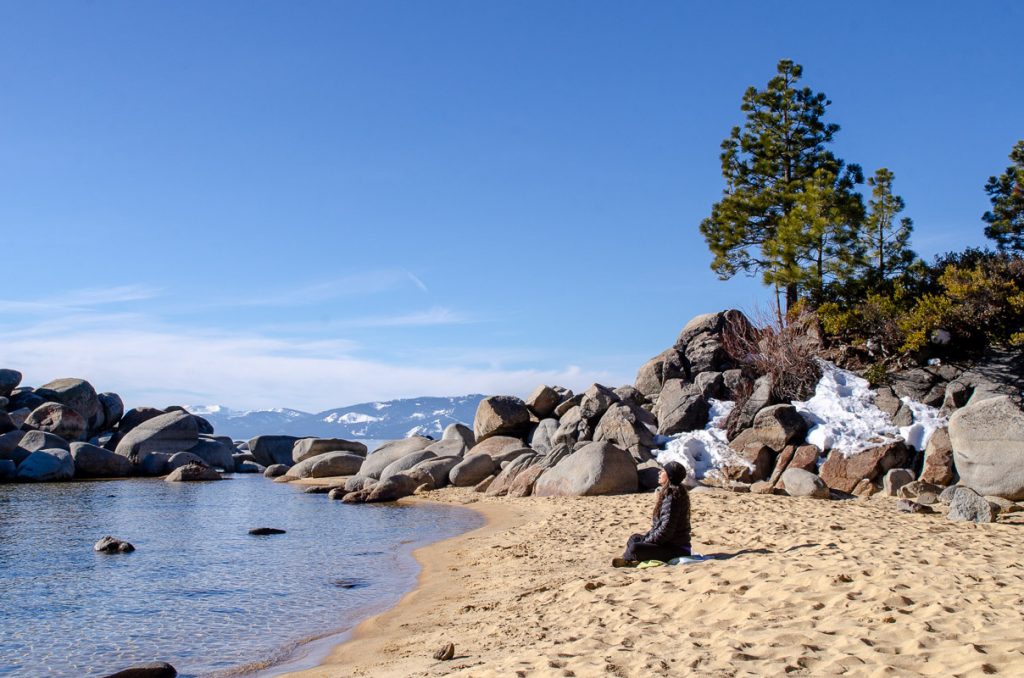 On his healing journey, Collins, 31, had already begun to try breathwork, meditation, and cold bathing as a form of relief for his mental and physical pain. But the bathing also helped him find an internal constant in his life while the world around him was changing. He started with showers, worked his way up to two minutes, then plunged into the Truckee River for the first time for 30 seconds.

“The cold water pulls you into transcending the mind. If you’re so stressed about something and do your breathwork and get in the water, it just takes you to this quiet [place]. There’s these profound openings into the stillness of being and it’s this all-encompassing peace,” he said. “Doing that became a meditation practice on its own … [and] I think that’s my main source of inspiration to continue it. It’s really beautiful when your mind chatter falls away and you’re one with the lake.”

When his father died in 2020, Collins went on to become an end of life caregiver for area residents with terminal illnesses. He also wanted to pursue the practices that had given him so much relief and began reading deeper into yogic texts, pursing more advanced meditation, longer stints in Tahoe and Donner Lake’s icy waters, and completed a yoga teacher training at Sivananda Ashram in Grass Valley in July 2021.

Today, he aims to teach the Wim Hof method and would like to mix it with meditation, breathwork, and yogic postures or “asanas.”

“Asanas create heat, and that really does help with cold water. Having your body warm before you get in the cold is crucial,” he explained. “The important part about postures is we do store traumas in our bodies. Tools like the cold-water work in a synergistic manner to extract that.”

He describes the cold exposure as “your cells vibrating on their highest level. When you get right in, it doesn’t feel that way, and it depends on your level of surrender, but if you’re able to get in and surrender, it opens up peace within yourself.”

Info: Join Lorelei van Peborgh Saturdays at Secline Beach for a cold bathing meetup. People are invited to watch, ask questions, or join in, with no experience necessary. Sean Collins is available for private cold bathing and yoga workshops, and can be contacted at slcollins33@gmail.com.

The Spirit in the Water
Sports & Outdoors / Wellness

The Spirit in the Water
Sports & Outdoors