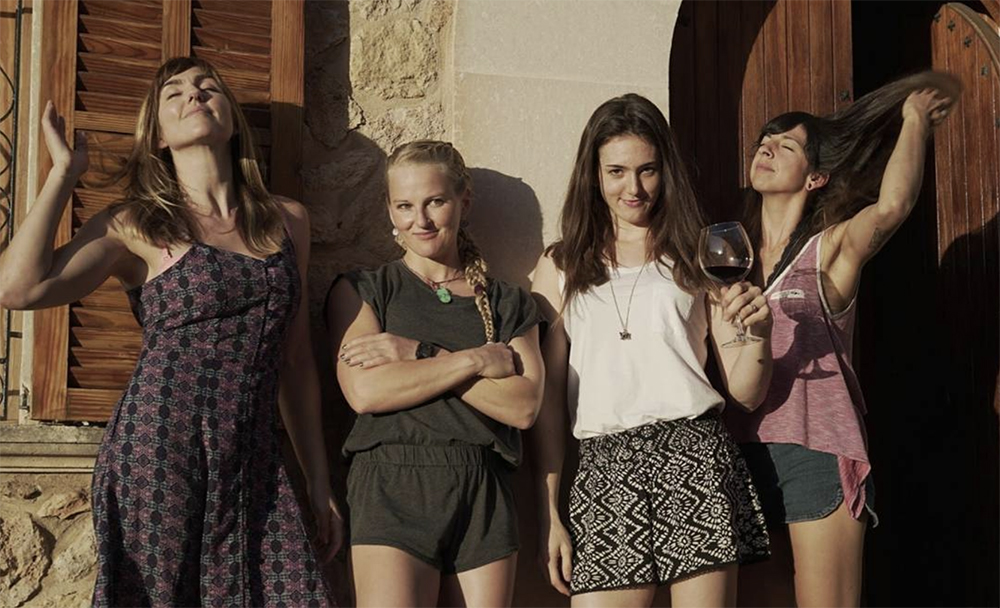 The trip didn’t seem all that unique to me at the outset. One of my sponsors, La Sportiva, approached me and four other women and suggested we do an all-female climbing trip together. “Have fun. Keep it light. We just want to have a story about you girls going out and doing your thing,” they wrote us in an email. To me it sounded perfect, mellow, easy — an awesome group of girls going climbing together.

The crew consisted of me and two other sponsored climbers, Paige Claassen and Margo Hayes; and two photographers/videographers, Tara Kerznher and Colette McInerney. We settled on Mallorca, Spain, an idyllic island paradise with enough quality rock to satisfy any passionate climber for years. There was both sport climbing and deep-water soloing (climbing without a rope over water), beaches, Spanish food, and a badass group of women to share it all with.

Paige and Colette were two of my closest friends; girls and I had grown up climbing and traveling with. We all live on different continents now — Paige in South Africa, Colette mainly in Finland, and myself in California, but we have remained as close as ever and couldn’t wait to do a trip together after many years. I had just met Tara the year before on a short photo shoot in Tahoe, but we became fast friends. She was sarcastic and witty and we share a mutual love for puns.

Margo Hayes was the youngest of our group and is fast becoming a household name in climbing. Last April she became the first female to climb 5.15 and quickly followed that performance by completing perhaps the world’s most famous — and the world’s first confirmed — 5.15, Biographie in Ceuse, France, in September. Margo grew up in Boulder, Colorado just like me. We had the same coach, Robyn Erbesfield, and took a similar path in climbing. She reminded me a lot of myself at her age, except perhaps a bit more mature and self-assured. At 19, Margo is from a different generation and up until this past fall I only observed her progression and growth as a climber from a distance.

We all arrived in Mallorca from different parts of the world. We stayed in a tiny village in an Airbnb where we went climbing together every day, cooked dinner together every night, and quickly developed a bond that I think meant something slightly different to each of us but was just as powerful for everyone. When we first arrived, we decided that since this trip was meant to be promoted on social media we needed our own hashtag. I made an Instagram story asking people to suggest some hashtags for our girls trip. We received dozens of suggestions, but the best one was the one we all thought was both clever, strong, and pretty funny: #SLAYDIES.

The hashtag took off. Everyone either loved it or thought it was kind of silly, but no one seemed to hate it. In the midst of the powerful social change of the #METOO movement, our trip and its hashtag struck a chord with our community, albeit with a much lighter tone — perhaps lighter was what was needed at the time. We received dozens of comments and messages about how inspiring our posts were from our trip. Honestly, it was a bit of a surprise as we didn’t totally foresee such a positive response, but we welcomed it.

One of our filming days, we went deep water soloing at one of the biggest and most famous deep-water soloing (DWS) walls in the world: El Diablo. It is a 75-foot cliff that sits on the edge of the Mediterranean Sea. The Diablo Wall became massively famous during the early 2000s when Chris Sharma and other famous climbers took to DWS and started putting up harder, more daring routes on the wall. It’s a strikingly beautiful red and orange streaked limestone cliff with intimidating steep routes on it, a few as hard as 5.13c. Some of the routes have huge jumps at the top, requiring the climber to launch themselves from one hold to the next, hands and feet off the wall, in order to reach the next hold. All while 70 feet above the water. The sea below is oftentimes rough, with big waves crashing into the wall, creating a deafening noise that elevates the blood pressure even further, and demands strong swimming skills to escape being slammed into the wall once you fall. I remember visiting the same wall in 2010 with a group of fellow athletes from The North Face. It was all men that time aside from me, and I remember feeling an incredible sense of fear and intimidation. I still climbed on the wall, but hesitantly, and I was constantly worried about falling poorly. It didn’t help that many of the routes have big moves near the top and several of the guys at the cliff warned me about the “reachiness” of the routes there, unintentionally shrinking my confidence and elevating my anxiety. I had lingering feelings of doubt and dread toward deep-water soloing after that trip. My confidence took a hit, and I remember feeling like that style of climbing was just “not my thing.”

This time, however, I received no warnings about big moves. The five of us girls rolled up to the cliff and descended the wall. Getting to the climbing is actually a bit of a process, you must down climb a 5.10 route, jump into the water, swim to another part of the wall and climb up some fixed ropes into a little cave that you can use as a base. We carried a dry bag with us with extra shoes, chalk, chalk bags, and water to spend a few hours down there. I was surprised and pleased to see there were a few other women climbing on the Diablo that day as well, plus some guys. But with the addition of our crew, the Slaydies that day definitely outnumbered the Sendlemen (we came up with that one later …)

We took turns climbing, launching ourselves off the wall and into the frothy sea below, laughing, cheering for each other, and having an amazing time. I even climbed a route I was too afraid to do during the previous trip, fittingly called Ejector Seat because of a huge move at three-quarters of the climb’s height. The cheers from my fellow Slaydies, as well as some other enthusiastic climbers from other parts of the world, dispelled any fear I may have felt and instead gave me the strength I needed to forget about the fall and just climb. It truly felt like a special day.

At the end of the day Margo decided to give the hardest route on the wall a go: “Loskot and Two Smoking Barrels,” a clever name from the first ascentionist Klem Loskot. The biggest jump on the wall is at nearly the very top of this route. A huge, all points of contact off, jump that was over one-and-a-half body lengths away for Margo. She didn’t seem fazed by the large distance between the holds, or the 70 feet of air below her. She hiked the first bit of the route and rested for ages before the jump. Breathing deeply and calmly, she set up and committed. She just barely got her hands in the holds but couldn’t snag it. She plummeted back into the Mediterranean with an elated scream and resurfaced giggling and ecstatic.

At that point the sun was setting and it was just the two of us on the wall. “I think we need to go,” I told her. And she agreed. We had been there for hours and didn’t want to get caught in the dark. But I had an idea. “Hey, I think we can swim out,” I told her. Instead of just climbing out, which I think most people would find to be cool and novel, the climbers in us felt like that was too “normal.” The true adventure would be in swimming around the corner and finding a beach to exit on. We jumped into the water, towing the dry bag behind us, and swam out to get a view of the wall. Treading water Margo and I stared at it and each remarked on how rad the day had been. From out in the sea the wall seemed even more intimidating and daunting, and I felt secretly proud of us for spending the day giving it our all — hooting and hollering and throwing ourselves around over the crashing waves. A few years ago I don’t think I could have had the confidence to really send it up there. That day however, the energy of the crew — the #Slaydies vibe if you will — it shrank the wall, dispelled my anxiety, and stoked my confidence. We raged that day. We didn’t send anything dramatic or ground breaking, but I felt like I had broken down some of the barriers I had let build up inside myself over the years. Margo looked at me beaming and said, “I don’t think I will ever forget this.” And we literally swam away into the sunset.