Home Sections Sports and Outdoors The Mountains Are For Sharing 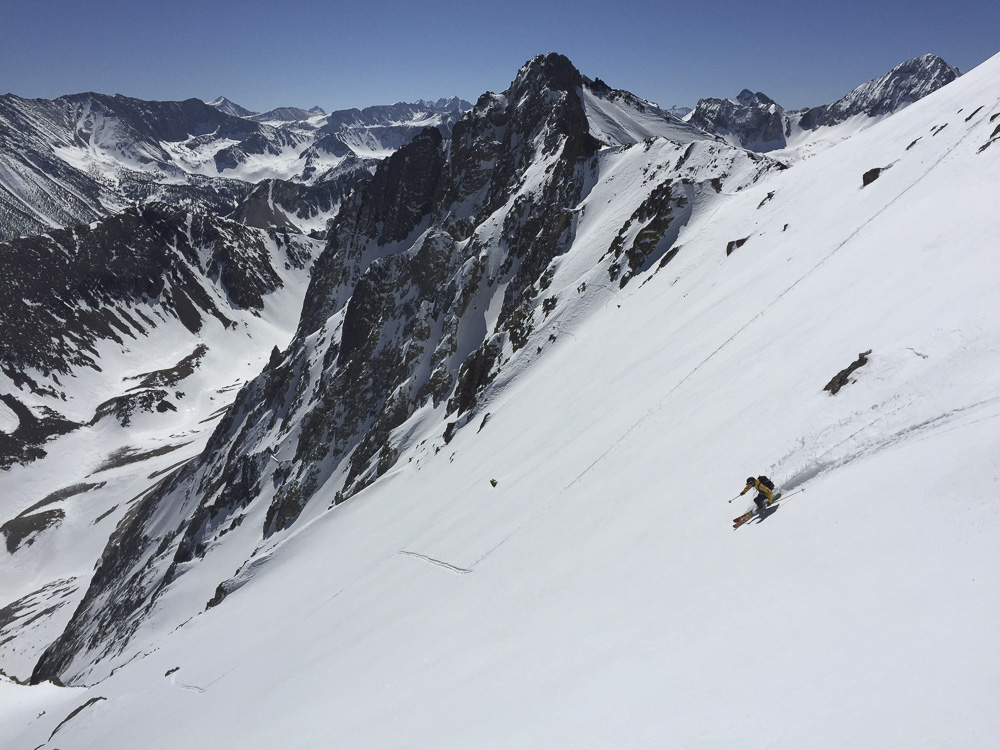 I was a baby-faced 22-year-old in 2001, when I drove across the country with everything I owned packed into the back of my old pickup truck. My plan was a relatively common one.

“I’m just going to spend a year skiing before I get a real job,” I told my parents.

Fast forward 16 years, and my new backcountry skiing guidebook Backcountry Ski and Snowboard Routes California has just recently been published. It details accessible routes throughout the state, from Mt. Shasta to the southern end of the Sierra Nevada, in an attempt to give readers a sense of what makes the backcountry skiing here some of the best in the entire world. My discovery and exploration of these amazing places didn’t just happen on their own, however; like most people I’ve relied on the guidance of others, word of mouth, information found online, and especially guidebooks to safely steer me in the right direction and help me lay tracks in places I never have before.

Before moving to Tahoe, my backcountry skiing experience was limited to skiing out-of-bounds at East Coast resorts, a couple of Tuckerman’s runs, and a few dozen hikes to the top of the Chin on Mt. Mansfield to ski lines down into the notch. Sure, it was technically backcountry skiing, but it was nothing like what Tahoe had to offer. As I got my feet wet exploring the Sierra I felt like a kid in a candy store, I had wide eyes, and everything I saw I wanted to ski.

That 1st winter, I bought a second-hand pair of Silvretta touring bindings for 50 bucks, and scored a deal on a pair of purple Ascension climbing skins. I found some like-minded friends, which is easy to do around here, and we set about exploring with the limited backcountry knowledge, skills, and information we had. I wanted to ski it all, so I began to consume as much information about where and what to ski as I could possibly find.

The first backcountry skiing guidebook I ever purchased was John Moynier’s Backcountry Skiing California’s High Sierra. The week prior my eyes had been opened to the limitless potential of the High Sierra on my first trip to the east side, with an especially exciting mid-winter joy ride down the Third Pillar of the Dana Plateau. The run was as fun as it was terrifying, and like with any addictive drug, I was hooked instantly.

Over time, I bought them all, every last guidebook I could get my hands on, outdated or not: Paul Richins’ 50 Classic Descents in California, George Hurchalla’s Backcountry Snowboarding and Skiing in the Northern Sierra, and more recently, Nate Greenberg and Dan Mingori’s Backcountry Skiing California’s Eastern Sierra, just to name a few. They’ll never know it, but the authors of these guidebooks have aided in my exploration of these mountains and helped me experience many of the greatest moments of my life.

This selfless sharing of information helped me along my journey as a backcountry skier, inspired me to go to new places, and facilitated so many of my adventures, enriching my life beyond words. So, when I was given the opportunity to share my passion and knowledge regarding these mountains, I considered it an honor and privilege that I absolutely could not pass up. Backcountry skiing as a sport and the mountains of California have given me immeasurable joy and happiness, and writing this guidebook is my attempt at sharing that with other people, so that perhaps they might experience the mountains in a similarly meaningful way. In a range as vast as the Sierra, of course, one could never include every route in a guidebook, and I tried to leave plenty to the imagination and hopefully inspire people to explore further on their own.

Perhaps not everyone agrees with sharing this kind of information with the masses, and the desire to keep places off the radar is certainly understandable, but who out there hasn’t benefited from someone sharing information with them? Whether directly or indirectly, information is passed on, and in our current digital age information is shared for a variety of reasons in almost real time across social media platforms, online forums, avalanche center websites — the list goes on and on.

The continued growth in popularity of backcountry skiing has been fueled in a variety of ways; the ease of sharing information among them. Yet, despite more people taking skis to skin tracks, the experience remains as pure as it was when pioneers like Norman Clyde were scaling the highest peaks of the southern Sierra, or HJ Burhenne and friends were making turns in woolen knickers on bear trap bindings and Firn Gliders in the late 1960s. The joy of hiking up a mountain and sliding back down hasn’t changed, and it never will.

The Mountains Are For Sharing
Sports & Outdoors / Wellness
10:00 am

The Mountains Are For Sharing
Education
7:00 pm