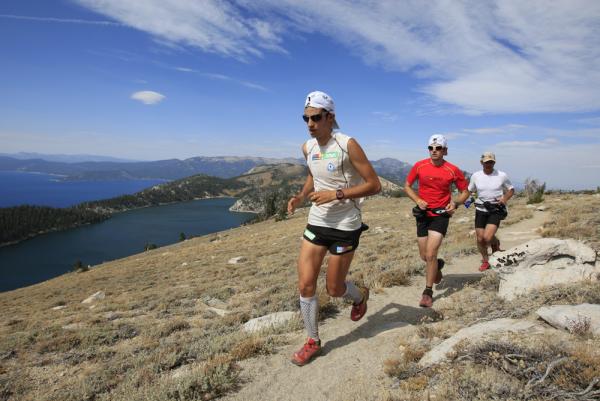 Though it’s not your average quarter-mile track, the 72-mile circumference of Lake Tahoe has become quite the natural racecourse.

Whether by two feet, two skis, two wheels or four, both local and international athletes have been drawn to the challenge of racing around Big Blue because the setting is as obvious as it is appealing. Where else can you find such a surreal and unbroken loop of buttery pavement or rocky trail?

In recent months, three Lake Tahoe circumnavigation records have been set by a road cyclist, a trail runner and a pack of skateboarders. To help celebrate their success, here’s the scoop on the three achievements with a winter wildcard record thrown in the mix to round out the four seasons.

The Great Lake Tahoe Bike Race
On the morning of Sept. 26, nearly 200 road cyclists took to the starting line of the Great Lake Tahoe Bike Race. Held in conjunction with the Lake Tahoe Marathon, the 72-mile race started and finished in Zephyr Cove. This year’s race pace was blistering with a pair of tandem cyclists charging ahead early on. The lead group of solo cyclists finally dropped the tandems climbing out of Sand Harbor and drilled it down to Zephyr Cove for a sprint to the finish. Curtis Doman, 37, of Utah won the sprint to take the win and set the new course record of 2:55:21.77. Fastest local was Nate Freed who trailed Doman by barely one second to take fourth. Twenty-eight people broke Freed’s 2008 record time coming in just under three hours.

Kilian’s Quest
On the morning of Sept. 28, ultra-running phenom Kilian Jornet took off sprinting on the Tahoe Rim Trail determined to break the 165-mile roundtrip speed record. Thirty-eight hours and 32 minutes later, the 21-year-old Catalonian jogged back into Tahoe City having crushed Tim Twietmeyers’ 2005 record by over seven and half hours. Jornet had support from a logistics team, including a doctor and a dozen pacers, but there was no doubt whose tireless legs pushed him up the 21,000 feet of elevation gain he encountered en route. The record-breaking run was another crown jewel for Jornet, who is in the midst of an international trail running project entitled ‘Kilian’s Quest.’ The quest focuses on setting records across some of the world’s most challenging ultra-running terrain. (To read the story of a local mountain biker seeking out Jornet on the trail, see ‘Intersecting Kilian’s Quest’ on MoonshineInk.com. For info, see p. 4.)

A Skateboard Odyssey
On the morning of Aug. 25, six local skateboarders hit the streets of Kings Beach pushing and never looked back. Chuck Buckley, Joe Bak, Dave Brumm, Ernie Alvarado, Trevor Kekke and Dane Leonard proceeded to skateboard 72 miles around the lake over the next two days. The effort was organized by Buckley, owner of Tahoe Longboards, as a promotion for the ‘Skate the Lake’ breast cancer fundraiser that occurred the following weekend. The first day the crew skated for eight hours covering 36 miles. Bombing through Cave Rock at 40 mph was the highlight of the first day, according to Buckley. The group spent the night at Camp Richardson and pushed the remaining 36 miles back to Kings Beach in eight hours the next day.

A Snowy Sufferfest
On the morning of March 11, 2007, two local backcountry skiers set out from Tahoe City on the ultimate ski tour. Mike Tebbutt and Sam Scrocke spent the next 61 hours skiing approximately 130 miles around Lake Tahoe via a high route. Climbing over 30,000 feet along the way, Tebbutt and Scrocke skied on three-pin scaled touring skis wearing Garmont Excursion boots. They never bivied, but spent a few hours resting at choice locations, including the Meyers Post Office and the Diamond Peak Ski Patrol shack. During the last stretch from Brockway to Tahoe City, Tebbutt admitted to hallucinations and repeatedly falling asleep while skiing. Success was especially sweet for the pair as it was their third attempt at the mission. On their second attempt in 2006, they made it three-quarters of the way around before bonking due to fatigue, whiteout conditions and third degree blister burns on Tebbutt’s pinky toes that took four months to heal.