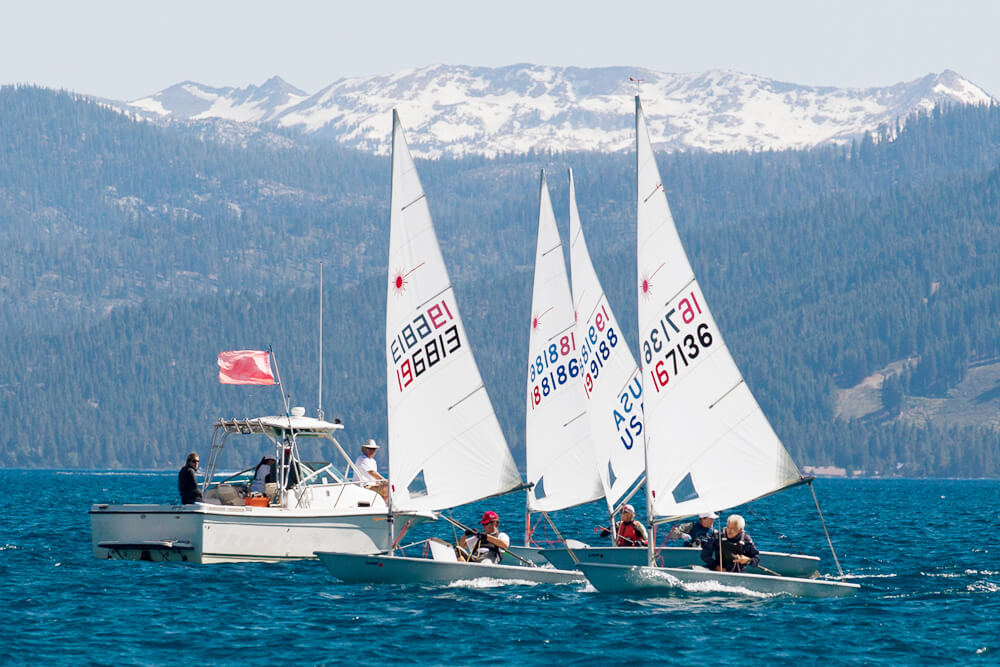 A clear and fresh alpine lake ringed with peaks and pines. Ample room to find maritime solitude but also plenty of people to share in the camaraderie. A range of wind conditions — from light to moderate but always fickle and shifty. Lastly, a bustling race scene to get your competitive grind on.

This is sailing in Lake Tahoe, and it is currently loaded with opportunity.

“The popularity of sailing and sailboat racing slid with the economic downturn, but is rebounding as the economy is increasing,” said Rick Raduziner, the port captain for the Tahoe Yacht Club (TYC).

With seasonal regattas, junior racing programs, numerous local sailing series, special race events, and a local culture that’s actively seeking out and welcoming new members to the sailing tribe, it’s as good a time as ever to get back into racing or start for the first time.

Out of Wooden Boat’s Shadow

The discussion of boating history on the lake tends to focus on motor-driven boats like the wooden pleasure crafts that are celebrated in events like the Concours d’Elegance, which takes place every August. Though this may be the main boating legacy of Tahoe, sailing and sailboat racing have occupied a prominent role on the lake, one that gained steam throughout the latter half of the 20th century.

Racing had its place on Tahoe in the early days as well. The Tahoe Tattler documents a race as early as 1881, when a battle between the Minnie Moody and Dora had locals squaring off in a mix of competition and fun, a recipe that seems to still permeate racing today.

Sailing received a push after World War II ended, when better boating materials became more widely available. Before then, most boats were mainly constructed out of wood and didn’t hold up well when the winds picked up. With the popularization of plastic and fiberglass after the war, pleasure sailing became more prevalent and led to the modern race scene.

Lasers to Beer Can Series

In 1976, the Lake Tahoe Laser Fleet was formed in Tahoe City as part of the International Laser Class Association to promote sailing and racing. The fleet continues to the present day as part of the TYC Monday night series, with both A and B divisions, and is one of the country’s longest running fleets in all of Laser sailing.

“Lasers are the most economical and most popular boats out there,” said Raduziner, adding that there are upwards of 30 boats on the water on Mondays.

One of the more decorated sailors to take root here is Nick Pullen, a Laser specialist. Pullen has competed in five World Laser Championships, won a National Championship in 1996 in Nova Scotia, and attempted to qualify for the Olympics for Canada in 1996. He has raced in the Monday night league every year since 1997, the year he moved to Tahoe. “I started sailing Lasers when I was 13. I never got the memo that you are supposed to quit [sailing Lasers] when you get older. But if you can sail a Laser well, you can sail anything,” he said.

On Wednesdays the TYC hosts a Beer Can Series, so named for its lighthearted format, which attracts a variety of locals and boats. “This series brings out both the beginner and the most aggro of team boats,” said John Crus, a Tahoe City resident who has been competing in the Wednesday league for 10 years.

Unlike Lasers, which have a universally standard hull design, the keelboats that race on Wednesday are varied, from the lightning fast Melges 24 class that hydroplanes on downwind tacks to older, slower hulls. There are three different divisions based on boat specifications, and slower vessels can receive a time handicap to even the playing field.

While the Beer Can Series mainly pulls in locals, TYC’s Trans-Tahoe Regatta in July attracts sailors from around the country. Around 35 boats typically enter, spread among the different classes. Now in its 51st year, entrants can race any boat that is a hull length of 20 feet or more. For the martini-in-hand spectator, the TYC organizes the Erik Arnold Memorial Restaurant Regatta Series — named after a popular local sailor who died in 2010 after a battle with cancer — where races are based in front of lakeside restaurants. This year’s event kicks off at Jake’s on the Lake on July 9, followed by Sunnyside and Gar Woods.

Sailing carries with it a whiff of old-fashioned recreation, and therein lies the challenge in drawing the younger crowd, but two programs are seeing strong numbers in inspiring kids to get on the water. Since 2000, the Tahoe City Parks and Recreation department, in conjunction with the TYC, has run the Junior Sailing Program, which includes instruction as well as a Laser racing program.

There are about 15 kids that will compete this summer as part of the TYC Junior Race Team, according to Bryce Griffith, who runs the youth programs. Seven of these kids are in the 14- to 18-year-old category and compete in the B-division league on Monday nights, while kids younger than 14 compete on the Laser Pico, an entry-level version of the Laser. Students must have their own boats, but the program provides the sails, mast, and rigging, helping to offset costs.

Griffith enjoys fostering a passion for sailing among his students and believes spreading this enthusiasm is the key to keeping sailing relevant. “Sailing is something that gives confidence and some self-esteem. You learn about rigging, the wind, the water, it’s kind of like playing chess on a moving chess board,” he said.

Tahoe City Parks and Rec also offers sailing camps at Obexer’s Marina and has an enrollment of 200 to 250 kids per summer. That number has doubled over the last decade, and class sizes have quadrupled from around six kids to 24. There is now a waitlist for most weeklong sessions.

In addition, the Truckee Donner Recreation and Park District offers beginner, intermediate, and advanced sailing camps at Shoreline Park on Donner Lake. While there is no racing component to the program, the popularity of the camps, which have 85 to 100 kids enrolled each summer, is on the rise.

“We have definitely seen our numbers grow over the years, partially because of our great instructors,” said TDRPD sailing director Shaun Mitchell. “The feedback has been real positive. Many kids return year after year to advance, and they like to come back and help out as instructors when they graduate.”

More than a sport, racing has become a way of life for many locals, and they are itching to spread the word. “The sailing community is like family here,” said Pullen. “They become your best friends. They are real and are very welcoming to anyone who is new to sailing or wants to try it out.”