Home Sections Sports and Outdoors The D.O. Will See You Now 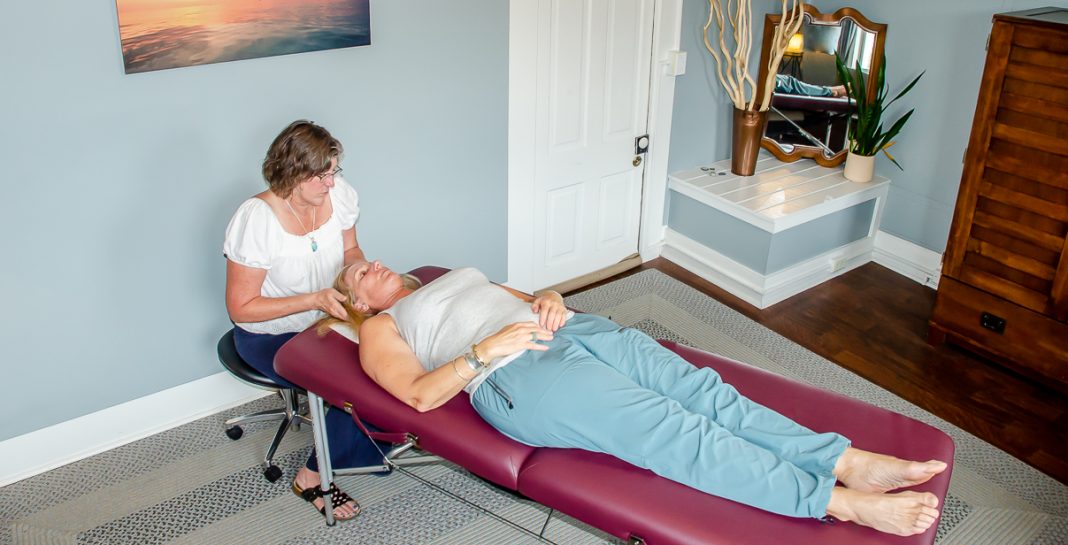 Dr. Patricia Reber is a hands-on physician, and I mean that quite literally. The Truckee doctor specializes in techniques that work with patients’ fascia, muscles, and skeletal systems to alleviate pain and promote healing.

The techniques Reber uses were an integral part of her training as a doctor of osteopathy, or D.O.

What, exactly, is a D.O.? I’ve been asked this question many times because my daughter is in school to become one, herself. Whenever people ask what she’s up to, the conversation goes something like this:

“What’s your daughter doing these days?”
“She’s in D.O. school.”

“In what?”
“Osteopathic medical school.”

The guesses continue: A naturopath? An eye doctor? Some kind of massage therapist?

“No,” I tell them. “She’ll get a medical degree. She’ll be able to do whatever an M.D. does in the specialty she chooses.”

Few people understand, and I don’t blame them — most people have never heard of a D.O. But this is changing; one in four medical students now attends a D.O. school, and 6,500 new D.O.s enter the medical profession each year.

M.D.s and D.O.s are more similar than different: Doctors of osteopathy get the same training as M.D.s., do rotations and residencies, and choose specialties, like M.D.s, but D.O.s also receive 200 hours of training in hands-on techniques designed to improve nerve function, restore movement, and treat pain.

It’s possible that you’ve been to a D.O. and not even known it. In the Truckee/North Tahoe area, if you’ve gone to an endocrinologist, taken your child to a pediatrician, had an X-ray read, been to the ER, or seen a gynecologist, it’s possible your doctor was a D.O.; the Tahoe Forest Hospital system employs 13 osteopaths.

If you haven’t yet been to a D.O., that will probably change in the future; the profession grew 113% in the years between 2000 and 2016 — more than triple the growth for M.D.s in the same period. Clearly, incoming medical students are attracted to something in the D.O. program. Our daughter was one of them.

Since early childhood, she’s been fortunate to receive osteopathic treatments from her aunt, a D.O. in Seattle.

“I remember being too young to realize that Aunt Cathy was a physician, because her treatments involved using her hands, and I didn’t know that that was something doctors did,” our daughter said. “When I got older, I learned a lot more about osteopathy. I got to observe Aunt Cathy working on patients, and knew I wanted to attend a D.O. school.”

Our daughter also values osteopathy’s core philosophy: “I wanted to be trained in a way that teaches me to look at my patient as a whole person, and not just look at the disease process. In D.O. school, that’s really the foundational training that we receive.”

Osteopathy’s founder, Andrew Taylor Still, M.D., developed the field after years of being a Civil War surgeon and witnessing areas in which traditional medicine was falling short — or worse — doing harm. In response, Still developed a system of medicine that focused on the body’s ability to heal itself. His curriculum included a series of manual techniques, now known as Osteopathic Manipulative Medicine, or O.M.M., that could improve the body’s function and facilitate healing. He opened the first osteopathic medical school in 1892, and — groundbreaker that he was — admitted six women to his first class of 21 students.

Today, there are 38 accredited D.O. schools in the U.S. Yet despite the field’s explosive growth, osteopathy has often struggled to be recognized on equal footing with a Doctor of Medicine degree. Many D.O. students, including my daughter, feel they have to take extra steps to compete with M.D. students in securing a desirable residency.

“Most of us are taking the M.D. boards in addition to our own D.O. boards to prevent any discrimination from happening,” she said. “Some residency programs actually require D.O. students to take the first two M.D. boards in order to even be considered for residency. Hopefully this will change in the future, but for now, D.O.s are still not always seen as equal to M.D.s, which is ridiculous since we go through the exact same schooling, plus more.”

Jonathan Laine, M.D., attending emergency physician and chief of staff at Tahoe Forest Hospital, concurs. “There’s no difference at all between the D.O.s and M.D.s in the emergency room. Their backgrounds may be a little different, but they go through identical residencies in emergency medicine.”

There are now 121,000 fully licensed and practicing D.O.s in the U.S. You’re as likely to see D.O.s practicing in rural areas as you are to see them holding preeminent urban positions; the White House doctor to President Joe Biden is a D.O., and so is NASA’s chief health and medical officer.

Just over half of D.O.s enter primary care fields, including internal medicine, family practice, and pediatrics. But the remainder specialize in non-primary care, including emergency medicine, obstetrics/gynecology, anesthesiology, sports medicine, and surgery. My daughter’s first two rotations, in fact, are in general and specialized surgery.

Not all D.O.s use the manual O.M.M. techniques they learn in school — it really depends on their specialty. Radiology, for example, wouldn’t lend itself to O.M.M. Other D.O.s, like Reber, base their practice on it.

“Within every human being is a self-healing and self-regulating system,” she said. “I see myself as the facilitator to help people achieve balance in their own health.”

Our daughter plans to incorporate the hands-on techniques into her future practice: “I love O.M.M. It’s a great additional tool for doctors to have, and it can really benefit patients.”

Osteopathy can be exceedingly gentle, and lends itself particularly well to treating children. Reber’s patients include kids with ear infections, and newborns who have difficulty nursing. Most of her patients, however, come to her in pain, often after car accidents and sports injuries.

“D.O.s are sometimes called ‘the doctors of last resort,’” she said, “because people come to us after getting chiropractic, acupuncture, massage, and physical therapy. They usually wait so long because they haven’t heard of a D.O.”

Before becoming a D.O., Reber suffered from chronic jaw and back issues that weekly chiropractic treatments weren’t resolving. “One treatment with a D.O. gave me three months of relief.” Already interested in bodywork, Reber changed her career as a civil engineer and entered medical school.

Our daughter loves the D.O. path she’s on. But she’s gotten so tired of explaining what a D.O. is that she now just says she’s in “medical school.” The most common response? “Good, we need more nurses.” Don’t get me wrong — I bow down to nurses everywhere. But don’t make assumptions about women in medical care; that young gal in scrubs just might be a doctor, and she might even be a D.O.

The D.O. Will See You Now
Arts & Culture