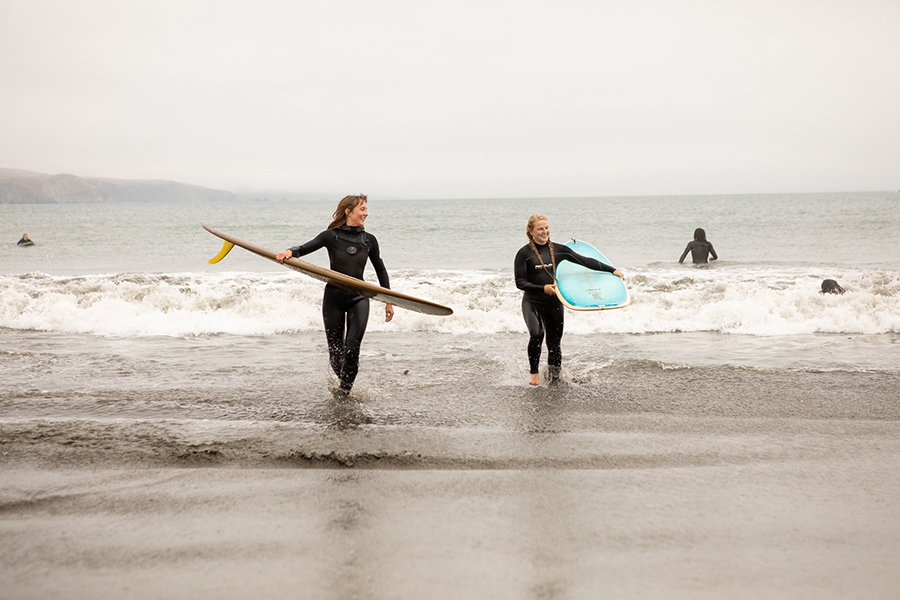 When you’re well-practiced at something, the details matter. Twenty-two years ago when I first started climbing, I wore shoes three sizes too big, a harness that was more like a diaper made of thick webbing, and I didn’t know what a chalk bag was. I climbed as high as I wanted and then swung around on the ropes, ecstatic at the foreign feeling of being off the ground. I was a kid and didn’t mind being new to climbing — I was new to life in general.

Today my climbing shoes are three sizes smaller than my street shoes. My harness is weightless and modern, and my chalk bag always has the proper amount and type of chalk in it, strapped around my waist just so, with a brush attached to the side (ALWAYS carry a brush). I use sand paper and super glue on my skin, and bring several changes of clothes depending on the weather, the conditions, and the style of climbing. Everything is planned, success is well-defined, training is precise, and failure is a constant theme. Climbing is my career, my identity, and my passion. I have been doing it for so long I don’t know much else.

Even still, the process, precision, and familiarity sometimes grate my psyche. I feel worn and beaten, constantly scrutinizing the tiniest increments of success and failure. Over the years I’ve found myself in periods of time where I have retreated away from climbing; felt disconnected from it. I was still practicing it and going through the motions, but with no real purpose — just mechanical muscle memory executing the moves because that’s what I’ve always done.

I picked up skiing again (after 15 years away) as a way to redirect my motivation, to find another focus that was less familiar. But, having been raised a skier from age 2, I fell back into it with ease. It was another childhood comfort I felt like I had always known. Soon skiing carried the weight of performing as well. I found myself wanting to always be better, to improve and to set goals. Skiing and climbing took on similar places in my life: deep passions that also carried the weight of my own expectations.

The other day a woman asked me how to not be afraid and intimidated when she walks into a climbing gym as a first-time climber. She told me she felt like everyone was watching and judging her; like she was afraid she wasn’t doing things right and she didn’t feel welcomed. I realized that I didn’t know how to answer that question. I had never experienced such a situation. Climbing gyms were always my home, my community, and I’ve never felt that way. But, I came to realize that my experiences being a beginner at other things I’ve tried as an adult probably run parallel to this woman’s.

A few weeks before writing this I went surfing with some friends. I am a terrible surfer, and I suck at basically everything that has to do with being in the ocean. I am horribly shy and uncomfortable with the whole surf “scene” as well. I am afraid of doing something wrong and offending someone while surfing. I feel like such an outsider; like I do not belong in that world.

But I do love the way surfing looks — the power of the waves, the movement, and flow is all beautiful to me. I have caught a few waves on random trips here and there, and the feeling was truly magical. I would imagine catching a wave and actually surfing it is one of the greatest feelings in the world.

The day I went out with friends I was terrified and intimidated. I wanted it to feel perfect, rehearsed, tidy, and detailed, just like my climbing and skiing always did. It was far from that. I was more akin to the kid in the diaper harness with shoes three sizes too big. Only this time I was self-conscious and worried about how that kid looked to everyone else. The board felt awkward and cumbersome. I didn’t know where I was supposed to be, when to paddle, how to avoid other people, etc. I was afraid of everyone else seeing how bad I was. Much like the woman walking into the climbing gym for the first time, engaging with an activity I was a beginner at made me feel exposed and vulnerable, a state we all used to embrace as children but as adults we have developed an aversion to.

As the day wore on, I let my guard down a bit. With the encouragement of friends I let myself try and fail. I made mistakes, tried to consciously embrace that kid with the diaper harness with zero ego, and be less inhibited. Thinking back on that first day of climbing without the pressures of success and failure, conditions, skin, and what everyone else thought of me, climbing was distilled down to its true essence. There was no ego, no outside pressure, it was just joy and stoke for climbing. It was (and still remains) the reason I have pursued a life dedicated to climbing for the past 22 years. Oftentimes other stuff gets in the way, but remembering what it was like to be a beginner is what keeps me going, keeps that fire alive and burning.

I kooked pretty hard the rest of the day, and it was a blast. In all honesty I will most likely never master surfing like I have climbing and skiing, but that in itself is a reason to keep doing it. Being a beginner is important. It helps ground us, reminds us what’s important, checks our ego, and keeps us young. In the end it’s not that we don’t belong, but rather we’ve forgotten how to be vulnerable like we were as kids. We bring all of this unnecessary baggage to everything we do, to how we see ourselves. We fixate on the details. Once we let it all go, embrace who we are, who we always have been, and just try for the sake of trying, we begin to enjoy the newness of it. We can be that kid again. And let’s face it, living with the mind of a kid — really someone who is not afraid to be afraid — is pretty much the best way to live.