Home Sections Sports and Outdoors That Dog Will Hunt 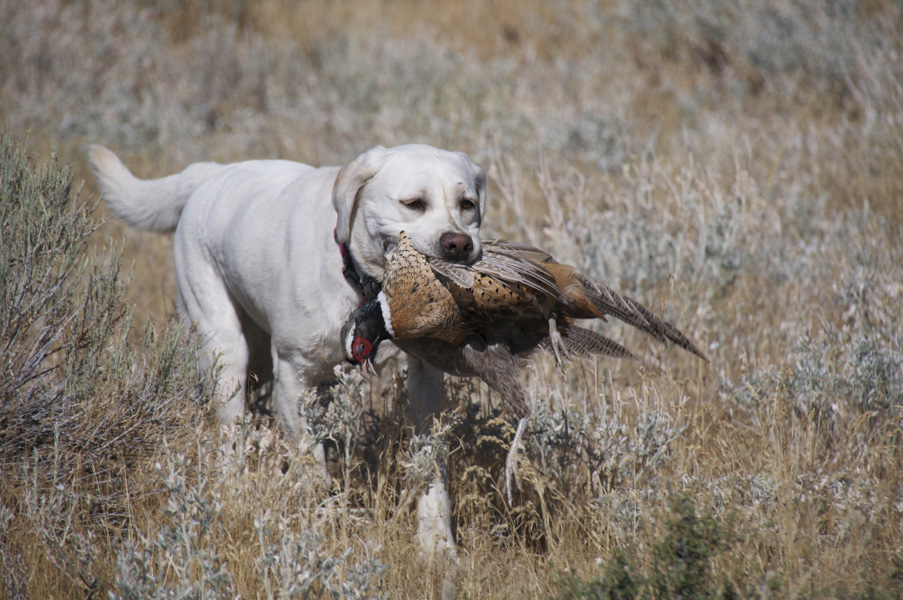 It’s mid-April and I’m standing in a field 30 minutes north of Reno, watching dead ducks and pheasants being mechanically chucked into the air to land amid a crop of sagebrush in the distance. Carolyn Goll, co-owner of Silver State Kennels, stands with a restless black lab at attention by her left leg as the dead fowl fly once more. Following a long pause, she points her hand outward and the lab tears off running — in the wrong direction.

A whistle from Goll, and she points to the right. Fifty feet in front of her the dog wheels about, sees her motion, and runs to the right. Dog and master repeat this act a handful of times, whistling and pointing until the the dog gets close enough to hit on one of the ducks like a drool-covered stinger missile.

This kind of communication is called “handling” and its perfection is a primary goal for Goll and her husband Joe Reinhardt, who spend the majority of their year training hunting dogs to work efficiently with their human counterparts. The lab I watched was just over a year old and still has some learning to do — a masterly trained dog should be able to pick up on a bird with the minimum amount of handling necessary.

“They’re athletes, and they need to train like athletes,” Goll said. “It’s more than just your buddy that goes to the store or on a hike with you here and there. You develop a really close, bonded relationship because you’re working partners … It’s more of a respect kind of thing.”

The walls of the office at Silver State Kennels are covered in birds: taxidermied pheasants, ducks, quail — all Nevada birds, Goll says proudly. The only outliers are a pair of Canadian snow geese, courtesy of the couple’s yearly trips to Canada. They’ve been doing it long enough that when bird season rolls around, they take off for those months and leave the kennel in the hands of their employees.

On one such Canada trip, the two convinced the kennel’s vet to bring along his first hunting dog, who had just lost her leg to cancer. It took some prodding, but he eventually agreed — a decision he later thanked them for.

“We talked him into taking the three-legged dog up hunting with us, and I’ll tell you; it was one of the most beneficial things in my life to see the relationship between him and the dog, and that dog working so hard to retrieve geese in the field with three legs,” said Reinhardt, noting that it was the dog’s last hunt. “That’s the kind of relationship you build.”

April falls outside of bird hunting season — typically between October and February — but it’s a busy time for Goll and Reinhardt. The off-months during the spring and summer are when the pair trains dozens of dogs nonstop and even travels to compete with them in American Kennel Club (AKC) hunting and field testing tournaments. These competitions determine the skills of both the dog and the hunter to work cooperatively together, and are the true test of a well trained bird dog. Reinhardt, a rep for AKC, says they’ve had about 15 dogs make it through the national circuit.

The trainers at Silver State have used their finely tuned skills to train a vast score of dogs from the Truckee/North Lake Tahoe area, and in some cases have trained multiple dogs for one client, like Marty and Lee Cook.

“They get the basics all in, and then your job as the owner is to stay on top of them and keep the dog current, active, and take them out in the field,” said Marty, adding that the relationship he has with his hunting dog is no different than if his dog were a regular pet. “When you’re hunting it’s a working partnership, but the dogs don’t know it. It’s an adventure, it’s fun … They’re an extension of the family, whether they’re a working dog or not.”

Marianne Porter, a columnist for Moonshine Ink, also trained her yellow lab, Nilla, at Silver State. She says her dog is indistinguishable as a hunting dog most of the time — she won’t even bother birds in the backyard. But out in the field a switch flips.

“The first time I ever saw the dog in action, I was blown away,” said Porter, who doesn’t hunt herself but enjoys taking photos of Nilla and her husband Jim while they flush birds. “She was in charge all the way. She knew exactly what to do, how to flush, how to retrieve, bring it back, sit politely, drop the bird.”

After 35-plus years in the business of bird dogs, the moments that stick out for Goll and Reinhardt are all about the relationships they have shared with their canine companions.

“You know, we’ve got a million stories that we could tell, but a lot of them wouldn’t mean anything to anybody else; it’s stuff that we’ve experienced with our dogs,” Reinhardt recalled. “With every dog you remember their first retrieve, the first big goose they bring in — it’s stuff like that.”

That Dog Will Hunt