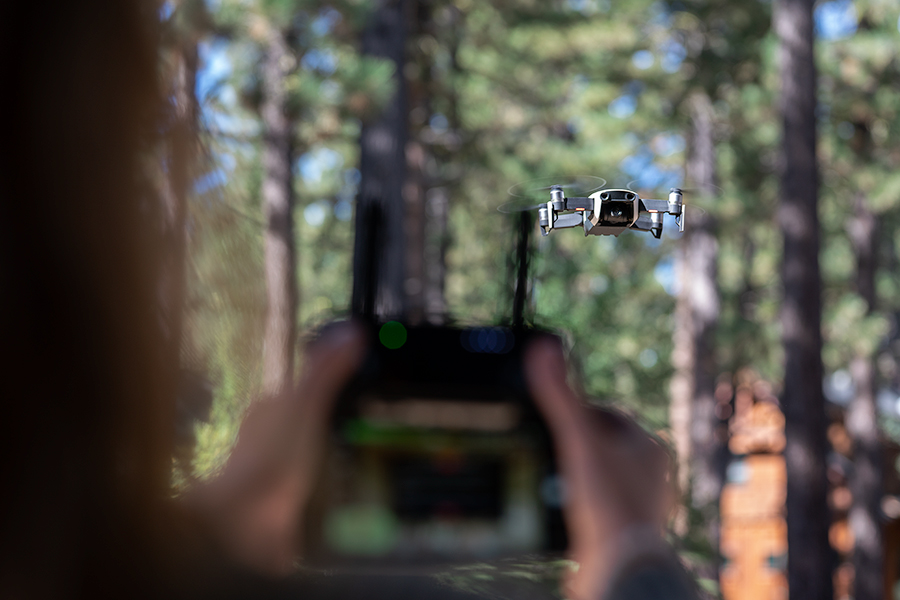 You’ve surely seen them at sunset on beaches around Tahoe’s shores, buzzing overhead like mechanical mosquitoes. Drones are now common in photogenic settings, as people strive to create floating birds-eye content for social media, commercial shoots, or just to enjoy the thrill of the flight.

But, several problems have been pegged to drones since their usage hit the mainstream. Many people are oblivious to, and therefore don’t follow, the myriad regulations (on the federal, state, and local levels) for drone flying in Lake Tahoe. Even when used properly, many people resent their physical presence and noise. Additionally, they present unique threats in the Basin such as to wildlife habitat.

As their usage continues to grow, we look at some perspectives on issues they bring, how pilots can improve, the basics of flying regulations in Tahoe, and some possible solutions.

Drone prices have plummeted over the last few years, and with decent drones available for about $500 you can pick them up at a big box store and be flying the same afternoon, with or without a clue on how to fly, which some see as a core part of the problem.

Local pilot and photographer John Peltier — whose aviation chops include 10 years in the Air Force — rarely flies drones in Lake Tahoe anymore. Mostly, this is because drones are banned at his favorite spots, but he’s also dissuaded by what he sees as irresponsibility by some pilots.

In one recent incident, he was flying a helicopter with paying passengers when a drone appeared within a few hundred feet of him far above its legal limit near Sand Harbor. The hard to see object presented a serious close call, especially concerning interference with his helicopter’s rotors.

“You have these drone pilots who don’t respect where they’re flying, they crash into people and invade privacy, and that leads to even more restrictions and a wearier public. It’s a cycle that will only continue to get worse as a few drone pilots ruin it for everyone,” Peltier said.

Lloyd Garden, owner of video production company Drone Promotions and admin on the Facebook page Lake Tahoe Drone Pilot, has both a passion for drones and an awareness of the issues surrounding them. Becoming hooked on drones after an internship with the International Ski Federation (FIS) in 2013, he flies regularly in the basin.

“I see drones flying over groups of people all the time, and that’s not allowed,” Garden said, referencing one rule of many that he believes pilots are unaware of — he adds that many aren’t aware of the 400-foot height limit. He acknowledges that commercial pilots aren’t perfect, but sees the majority of problems coming from hobbyist flyers.

Where to (not) Fly

Peltier believes the way to move forward positively is simple, but hard to enact: Respect the airspace rules.

Tahoe is ripe with photographic potential, but the legal limitations in the Basin can be sobering if you’re hoping to explore the skies. Drones are permitted in national forests, except in spaces where the forest overlaps with wilderness areas. All wilderness areas are banned for flying, since mechanized devices of any kind aren’t allowed in the nation’s designated wilderness areas. State parks are also off the table for Tahoe both in Nevada and California. The Nevada State Park website states that drones are prohibited except “in an area designated for that use by a park supervisor, and a commercial use permit is in effect.” In California overall, drones are allowed in state parks, but districts can create their own restrictions, as the Sierra District (which includes all Tahoe state parks) superintendent did in June 2017, citing concern for wildlife habitat as the number one reason. Currently no drone flying is allowed in any of the state parks in California without a special permit.

The airports in Truckee and South Lake have restricted airspace that overlaps with the majorities of their respective towns. Hobbyists are required to notify the airport before flying, and Part 107 flyers (commercial pilots) must apply for airport authorization from the FAA. Local municipalities have not banned drones, but as is the case with Truckee and South Lake, flight may still be restricted. Special rules also apply in cases of emergencies, such as wildfires, where drones can hamper firefighting efforts. Above all, pilots need to check before flying, and have their drones registered (as required by the Federal Aviation Administration since late 2015).

The drone industry itself faces additional challenges that will shape the future. Garden has seen the commercial market become oversaturated, and the rates that are paid for drone work have dropped exponentially. Additionally, the “wow” factor of seeing footage taken from the sky has dissipated, simply because there is more of it out there. “The creativity I have seen [for creating content] in some places has been improving, because it has to in order to stand out,” Garden said.

The potential for drone usage in Tahoe outside of content creation may also shift what the public associates with these aircraft. One potentially lifesaving tool is that they are being used locally in search and rescue operations. The Douglas County Sheriff’s Department has a dedicated drone team, and other SAR teams use them as well, and can search hard to cover ground from the air. Additionally, the Desert Research Institute in Reno is developing an unmanned aircraft for potential cloud seeding operations.

While conflict remains in Tahoe, an optimistic future is not lost, even with those critical of some aspects of the industry. “The majority of drones and drone pilots are out there doing great things,” Peltier said. “They’re saving lives with law enforcement, fire departments, and SAR teams … There’s potential that we haven’t even thought of yet, and they’re here to stay.”