Home Sections Sports and Outdoors Something About Bob: 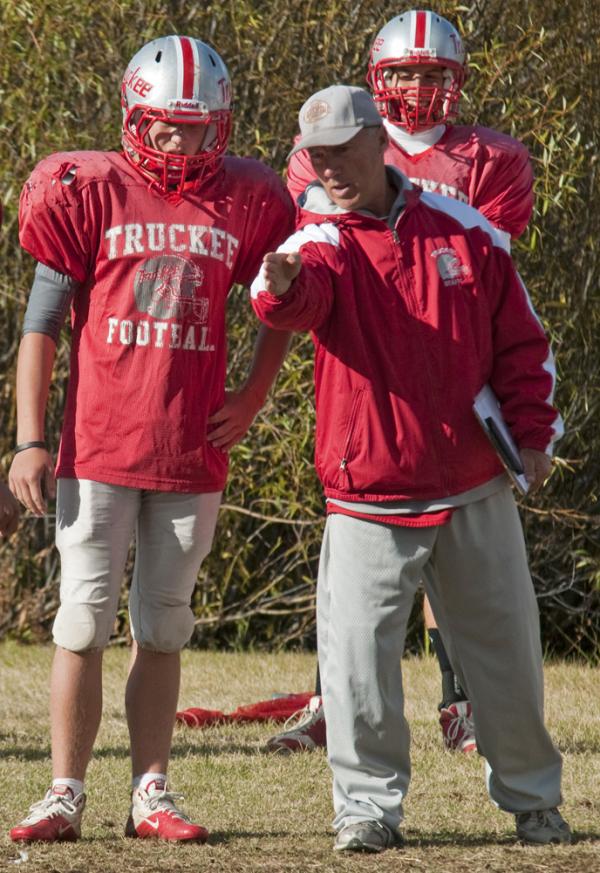 North Lake Tahoe is home to Olympic gold medalists, World Cup champs, and X-Games superstars, but when it comes to a downright sports dynasty not an athlete in town can touch the record of the Truckee High School Football Program. The Truckee Wolverine varsity football team has played in the Nevada 3A State Championship game eight times in the last 15 years, taken home the hardware in six of them, and is currently riding an 18-game winning streak, including a perfect 12–0 season last year. This season they had yet to give up a point as of press time. That’s right, we’re talking a 285 to 0 point differential in their last seven games.

Such a record almost sounds unfair. Shouldn’t a bunch of other hard- working high school football teams get to bask in the glory for a bit? Frankly, no, not if Truckee Head Coach Bob Shaffer has anything to do with it. For the last 18 seasons, Coach Shaffer has manned the controls of the Wolverine juggernaut and taught a revolving door of student athletes how to do his bidding — win. Star quarterbacks and defense-hurdling running backs may put the points on the board each season and deservedly hoist the state championship trophy first, but only one man gets to keep an office across from the trophy case at Truckee High. Coach Shaffer has been the catalyzing ingredient for every batch of Truckee’s potent winning formula.

So, of course, the million-dollar question is, what’s Shaffer’s secret? Can we bottle it and distribute it to other local teams? Truckee could be the coldest and winningest town in the U.S.! Not quite. Shaffer’s wisdom is no doubt as one-of-a kind as his sporting life story.

Shaffer grew up in Warren, Ohio, a town within a Hail Mary pass of the National Football Hall Of Fame in Canton, Ohio. He was the fourth of 15 kids in his family and earned himself a Division 1 scholarship to play college ball at the University of Dayton.

Upon graduating, he coached a high school football team in Ohio for 12 years before moving to Truckee, where he began teaching and coaching in 1993. He became the Wolverine’s head coach in 1995, losing the state championship game by one point that year, but made up for it the next, winning it all in 1996. Outside of his coaching responsibilities, Shaffer also teaches physical education and weight training.

Add up those bullet points and you’ll begin to understand Coach Shaffer. He’s courteous and humble, like any member of a 17-person family has to be, yet captains a disciplined ship, an obvious byproduct of 30 years coaching and nearly 50 years playing pigskin. Shaffer wouldn’t admit that he’s seen it all when it comes to high school sports but his game face is carved in marble. You’d be hard pressed to surprise him in the hallway or on the field, no matter the teenage exploit.

Digging deeper into his winning ways, Coach Shaffer mentioned that the common denominator between all the triumphant teams in his tenure was not just strong or skilled players, but intelligent players.

‘It’s been obvious that our best teams in the classroom play the best on the field,’ said Shaffer before an afternoon practice in early October. ‘Four out of the last six years we have won the state academic award for the football team with the highest overall GPA. That’s why we have been so successful. We play smart.’

Judging by what Shaffer told me about the average Wolverine game-day playbook (40 different run/pass plays plus formation changes and audibles), the Truckee players must indeed be geniuses to keep everything straight in the team’s college-level offensive program. Shaffer does have a little help from the local Pop Warner team, however. Many of his best athletes arrive at Truckee High having played on a middle school club team that taught a ‘Wing-T’ offense similar to the Wolverine’s. The local coaches of these pre-teen teams are more than happy to help lay the foundation for further Truckee dominance.

Which brings up yet another impressive aspect of Shaffer’s interminable touchdown run — his success has captivated the local community. He attributes some of the attention to the fact that football doesn’t have to compete with snow sports, but that doesn’t explain why live play-by-play of Wolverine home games is now radio broadcast and webcast by Truckee’s 101.5 KTKE.

The real answer is that the Truckee football program has deep roots, and more than a few proud alumni and local residents are thrilled to watch or hear the home team win come rain, sleet, or snow.

Looking ahead, Shaffer was coy about his squad’s chances to defend their 2009 state title, noting that four schools had dropped down from the 4A league, making Truckee the smallest school in the 3A, but he quickly countered by saying that his team could undoubtedly pull it off. Judging from their six straight shut-outs to start the season, Shaffer’s burst of confidence sounded plenty reasonable, but he was ready with an exacting rationale.

‘There are four reasons I think we’ll continue to be successful,’ remarked Shaffer. ‘We’re prepared, we’re passionate about the game, we hit the weight room, and we have a great coaching staff.’