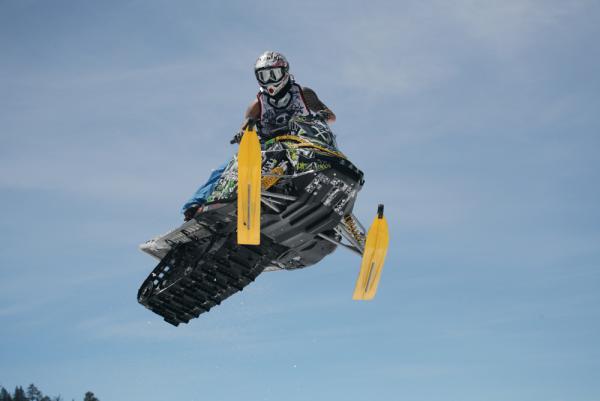 Duncan Lee was a pro wakeboarder and snowboarder when he discovered snowmobiling in 2002. At first, snowmobiling was the means to an end — a vehicle to access untracked terrain far from the crowded ski resorts. Gradually, Lee started using his snowboard less and less on backcountry trips, until eventually he stopped bringing his board at all. He went from snowboarding 120 days at Squaw Valley in one season to six days the following year. The season after that, he got in three days snowboarding, the next, one. Now, he doesn’t even bother buying a pass.

Why should he? Now Lee can get the same rush he got from snowboarding without the hassle of crowds, lifts, or buying a pass, and with the added benefit of turning the climb into part of the experience.

‘You get to the point where you can make your snowmobile do what you want,’ said Lee, 33. ‘You can surf the snowmobile anywhere you want, and you are no longer limited to just going downhill. Mountains become gigantic skate parks. You can go bigger, uphill and downhill.’

Lee has found kindred spirits in the six friends who make up the Alpine Assassins snowmobiling team he helped found in 2008. As Tahoe’s only snowmobiling and production team, Alpine Assassins is taking the sport to a new level, pushing the boundaries with steeper cliff drops, higher hill climbs, bigger jumps, and deeper forays into the backcountry. But their films are not just about showing the world how high or far they can go. With their two movies, Alpine Assassins’ mission is to present a holistic view of snowmobiling, one that shows the gritty details of being a die-hard sled-neck, from the breakdowns to the injuries to life on the road.

‘We’re focusing more on what’s involved with a day of riding,’ said Lee, who lives in Truckee. ‘We live the story. We are snowmobilers day in and day out.’

Alpine Assassins was created out of a chance encounter. During the winter of 2008, one of Lee’s snowmobiling buddies, Ken Evans of Reno, ran into a group of snowmobilers from Utah at Castle Peak. Recognizing each other’s skill and dedication to the sport, they hit it off. The Tahoe crew started driving out to Utah to go snowmobiling, and vice versa.

‘We kept snowmobiling harder, pushing the limits,’ Lee said. ‘Most of us were just friends who were along for the journey.’

‘We started riding at a level where the amount of money that it was going to take … to continue to progress the way we wanted, we needed support,’ Lee said.

In other words, sponsors.

Forming a team would not only help Lee and his buddies get companies to foot some of the bill, but it was also a way for the group of snowmobilers to stay connected, travel together, and continually progress in the sport.

‘Alpine Assassins enables us to go on cool trips every year; being on a team enables us to do a lot more of that,’ said Reno’s Ryan Oddo, who has been riding with the team since 2003 but was officially added to the roster last year. ‘Making movies makes you push it harder, think of new stuff to do — we all feed off each other.’

The team’s first movie, ‘AssassiNation,’ was filmed in 2010 in Tahoe, Utah, Jackson Hole, and other parts of Wyoming. It was during the making of that movie that team member Grant Korgan, who lives in Sparks, landed a 120-foot jump wrong, bursting his L1 vertebrae and leaving him partially paralyzed. Evans had to ride 15 miles to nearby marine barracks to find a helicopter to airlift Korgan to the hospital. Today, Korgan can walk with the help of Canadian crutches, got back on his snowmobile last year, and is currently sit-skiing to the South Pole (see article).

So far, Korgan’s incident is the most serious accident the team has suffered. Last year, Anton Council of Napa, who often rides with the team, was at the top of a cornice when a three-foot crown broke off, creating an avalanche that took him down the mountain. Fortunately, when the slide stopped, Council was on top and not seriously hurt. But at this level of snowmobiling, where 100- to 150-foot jumps are the norm and athletes drive 400-pound machines traveling up to speeds of 100 mph into remote terrain, is the risk becoming too great? No way.

‘It’s not like we’re gambling,’ Lee said. ‘Most of the stuff we do is really calculated.’

The sport’s inherent risk was another reason why a team was needed — it guaranteed a certain level of skill.

‘You are going miles into nowhere; you have to rely on the guys you brought with you,’ Lee said. ‘You want to surround yourself … with the most knowledgeable and safest riders so you know you’ll make it home.’

For Alpine Assassins’ second movie, ‘We Ride’ (in 2011), the team took longer road trips, driving as far as Revelstoke, B.C. (The fuel for that trip alone cost $2,000.) This year, Lee wants to hit up the Pacific Northwest and Whistler, B.C. As the team gets better and better, however, its focus is not necessarily on going bigger.

‘My goal this year is not concentrating on the big jumps but more of a complete line, like a big mountain skiing line, with one or two cliff drops instead of just jumping off cliffs,’ said Oddo.

The team’s movies also reveal tidbits about snowmobile culture: all of the guys are mechanics by necessity, tinkering on their machines in their garages and fixing their own snowmobiles when they break down in the field. They drive big trucks (another must if you want to be able to tow a snowmobile), and ride dirt bikes in the summer. They are, in essence, true motorheads.

As usual, Alpine Assassins’ third movie, which is in the works, won’t gloss over what it takes to be a snowmobiler at this level.

‘We catalogue the real experience of snowmobiling, day in and day out,’ Lee said. ‘What it takes to go places, the trials and tribulations: the broken sleds, lots of guys trying to decide where to go, storm chasing, finding lodging. All of it.’