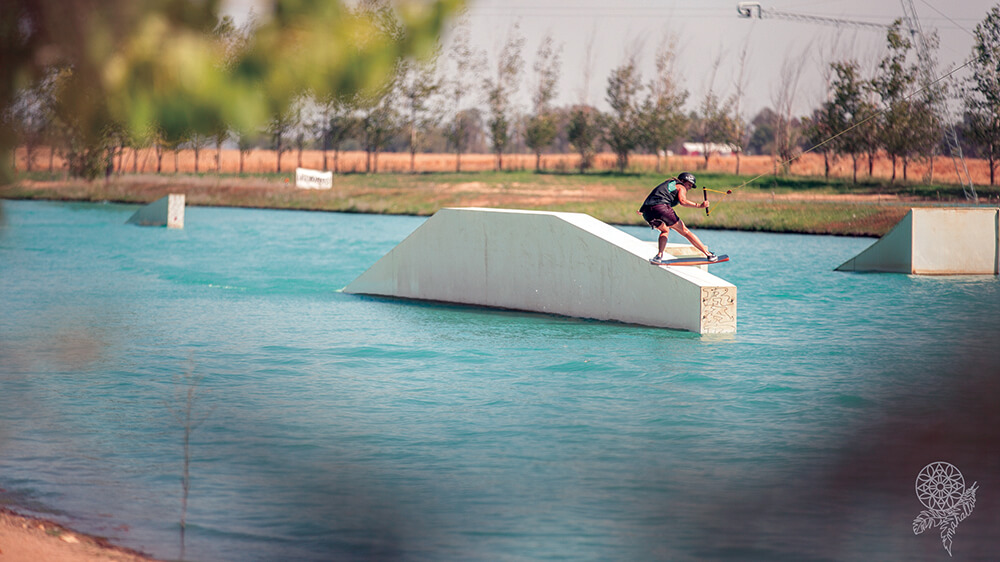 “Not really a day for the hard tricks,” said Jen GilanFarr with a smile as she climbed out of the Lake Tahoe water in early June, wearing only a thin wetsuit cut off at the thighs. The morning’s residual chop from the night’s gusts left the surface with some bumps. Nevertheless, she had put on a mesmerizing display of a variety of shove-its (the board rotates 180 degrees with the rider’s stance staying the same), 180s, big ollies, slashes, and more.

But “hard” is a relative term for GilanFarr, 28. Born and raised in Incline Village, she is the most successful women’s wakeskater on the planet. She is a four-time WWA World champion, three-time Wakeskate Tour overall champion, and the first woman to land several tricks, including a kickflip down a gap. She also formed a coalition of female wakeskaters called the Wakebabes and founded wakeskate company Wandr Co., the first women-specific wakeskate company.

“Jen has tons of raw talent and competitive drive combined with the smarts to manage several businesses and be able to travel while working,” said Myles Vickers, 32, a friend of GilanFarr’s who has been wakeskating in Tahoe/Truckee since 1997.

Given wakeskating’s small presence among boardsports, GilanFarr would like to promote the sport by at least getting people to understand what it is.
“I tell people that wakeboarding is like snowboarding on water, and wakeskating is like skateboarding on water,” said GilanFarr, who is also a freelance web and graphic designer and works at her family’s business, CB’s Pizza and Grill in Carnelian Bay.

A wakeskate has no bindings, is around 40 inches tall, and is symmetrical. Riders wear skate shoes to stick to the board’s grip tape surface, and the tricks stem from skateboard moves, from kickflips and shove-its to hitting rails.

GilanFarr grew up mainly skiing and wakeboarding in Tahoe, and moved to Orlando, Fla. after high school to pursue a professional wakeboarding career. Florida offered year-round warmth and calm waters whereas Tahoe has a lack of protected coves to consistently provide the ideal sheet-glass conditions, and is too cold to ride on much of the year.

Once in Florida GilanFarr transitioned to wakeskating for its easier accessibility, higher affordability, and less chance of injury.

“You can use just about any boat or a jet ski, you don’t need a big wake,” she said. “Plus you’re not strapped in, which makes falls more fun and less painful.”

After eight years in Orlando, GilanFarr moved back to Tahoe in 2013, a move that might seem questionable for a professional wakeskater given the lake’s fickle conditions and lack of an established wakeskate scene. But in her first year after returning she proved otherwise.

“You definitely have to work harder to ride here, but 2014 was my best year ever when I won three out of four tour stops,” she said. She also rides and trains year-round at the two nearby wake parks outside of Sacramento, where riders are pulled on a cable system around a lake. GilanFarr also travels to chase summer riding conditions, like to the Philippines in 2014.

The Ebb and Flow of Wake

As her career was ramping up in Orlando, women’s wakeskating also received a boost. In the spring of 2012, GilanFarr got a call from Wakeskate Tour’s organizer Silas Thurman to discuss including a women’s division to the emerging tour. Thurman knew she would be competing against the men regardless, as she had been doing for years.

“She was relentlessly willing to pay good money to enter contests and lose to the guys to build a presence for the women’s scene,” said Krista Bre, one of the Wakebabes who competes on the tour with GilanFarr.

The prize money would be slim, but it marked the first time money was even offered for women’s events. GilanFarr would also bear the responsibility for gathering the women necessary to join the tour. She succeeded in wrangling up six women the first year and the tour was on.

“If it wasn’t for Jen and her competitive consistency and motivation, women’s wake would not be where it is. Any adversity only fuels her passion,” added Bre.

Gilanfarr was just happy to keep riding. “I did it because I loved the sport and wanted to push it. But it was never for money,” said GilanFarr, noting that she might make around $400 for winning an event but spend $1,000 on travel.

The tour added to the camaraderie of the women’s scene, even if it didn’t provide financial stability. “Every wakeskater knows each other, and there are maybe 10 people, all guys, in the whole world that make a living off of it,” said Vickers.

For three years the women had their own division on the Wakeskate Tour — GilanFarr won the overall title every year — with competitions held in water parks using a two-tower cable system to tow riders to the rails, gaps, and drops. There were no equivalent training grounds to practice on before the events, so the women could only ride the challenging features on the day of competition.

As the tour began, Gilanfarr realized the women would benefit by working together in order to progress the sport rather than view each other as competition to beat. To do this, in 2013 she formed the Wakebabes, a group of female pros from around the world who travel and compete together. Stemming from the Wakebabe’s success, GilanFarr launched her wakeskate company Wandr Co. in 2014 to give female riders more wakeskate options.

Despite the stronger ridership and improving scene, a title sponsor backed out for the summer 2015 tour, and the wakeskate tour was cancelled for both men and women.

Even if her main competitive outlet has been shut down for a season (the tour will be back in 2016), GilanFarr sees only potential. She plans on organizing grassroots events to get riders together, filming with the Wakebabes, and organizing ride days and clinics around the country. She is also developing a Wandr Co. gromskate, a board designed for younger riders, to increase accessibility for the next generation.

Her advice to those interested in wakeskating is that time on the water is the most important element, and also practicing other sports that might cross over into wakeskating, like wakeboarding or skateboarding. She also loves teaching, and offers wakeskate lessons on Lake Tahoe.

“It’s going to be the best summer ever,” she affirms.

To learn more about GilanFarr’s diverse talents, or to get in touch about wakeskate lessons, visit her website at jnonymous.com.