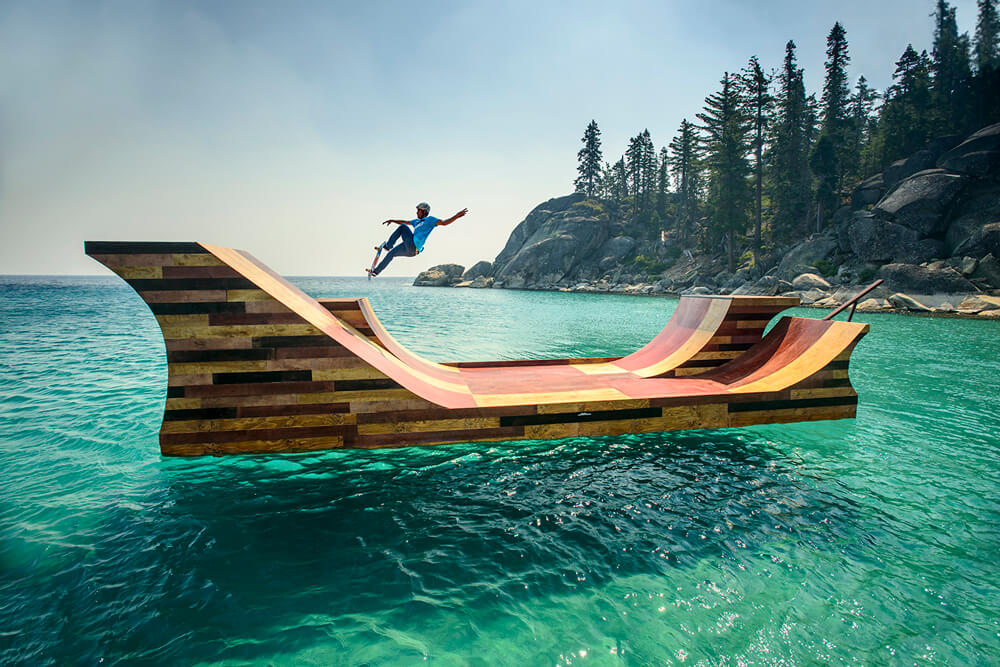 It seems like something out of a dream or a Photoshop project — a large wooden skateboard ramp, its colors a rich mahogany and amber, miraculously floats on the crystal green-blue waters of Lake Tahoe as a skateboarder takes flight above it. As the image made its way around social media last month, it had people both in awe of its beauty and engineering, and wondering if it was a hoax.

The skateboard ramp is real, all right. Part of Visit California’s Dream365 campaign, which highlights Californians who have aspired to build, create, and do amazing things in the Golden State through a commercial and series of YouTube videos, the floating skateboard ramp was the brainchild of an ad agency and pro skater Bob Burnquist.

The idea behind the Dream365 platform, which replaces Visit California’s previous campaign, “Find Yourself Here,” is to “parlay the California lifestyle and what happens here, that you can dream big and make it happen,” explained Greg Carson, chief creative officer of ad agency MeringCarson.

When Carson learned that Burnquist was interested in being part of the campaign, he knew he had to outdo Burnquist’s webisode series, “Dreamland,” which shows the skater practicing and trying out new tricks on his world-renowned backyard ramp in San Diego that more closely resembles a roller coaster than a simple skate ramp.

“We had to one up the Dreamland video,” Carson said. “We came up with the idea of a ramp on Lake Tahoe. He had skated on every surface on earth; we wanted him to skate on water.”

The job of designing the ramp fell to professional ramp builder Jeff King, former host of FuelTV’s “Built to Shred” show, and Jerry Blohm, a longtime art director and production designer. After a month of design work, construction on the ramp began in August at Obexer’s Marina on the West Shore. It took one week and five guys to build the birch ramp, which measured 34 by 12 feet and included a 5-foot tall half pipe, 4-foot tall jump ramp, and 7-foot roll.

The trick, of course, was to make the 7,300-pound ramp float. To do that, King and Blohm attached 15 plastic barrels to an aluminum stage lighting frame to give the ramp buoyancy.

“We strapped the wooden ramp down to the aluminum frame and hoped it worked,” King said. “It floated the first time.”

It took two hours to tow the ramp out to D.L. Bliss State Park. The crew nicknamed the floating ramp “the pirate ship” for its deep brown colors and boat-like shape.

Burnquist skated on the ramp, which rocked like a boat in the water, for around three hours. And even though he took some jumps off the ramp into lake, not a single skateboard was lost; there was a scuba diver standing by to retrieve all boards.

Unfortunately, the ramp exists no more. It was disassembled.

“We didn’t want any kids riding on it or stealing our thunder by putting a video out,” Carson said. “But the plans are intact so we could build the ramps again.”

The 30 Dream365 videos were launched on Feb. 28, but Carson said the Tahoe spot has proved to be the most popular.

“It’s a testament to Lake Tahoe and the stunt and Bob,” he said, “and it highlights the beauty of Lake Tahoe.”

• Watch the video of crews constructing the floating skate ramp at Obexer’s and Bob Burnquist’s session on the ramp at youtube.com/watch?v=FmHDfTBXEE0.

• View all of the California dreamers and their creations at youtube.com/watch?v=GmkSUq_yDHI&list=PLF2A6A88CA78F50E1.