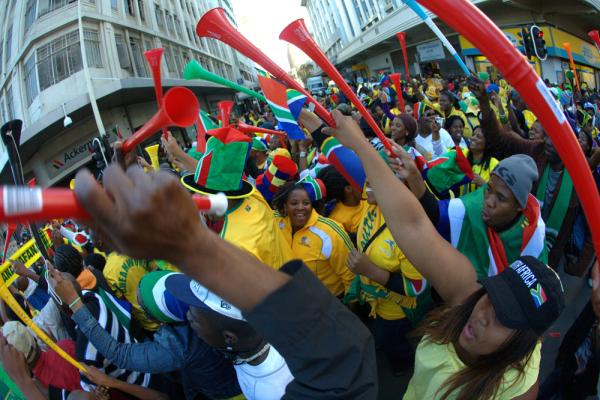 Editor’s Note: Ryan Salm, a Tahoe resident and frequent Moonshine Ink contributor, has been traveling across Africa for the past three months and recently met up with Truckee locals Dan Hurley and Paul Raymore for a World Cup adventure.

It’s been about two weeks since the World Cup began, but it seems like a lifetime ago. In total we’ve seen 30 matches on TV in bars, hotels, beachside fan parks, and people’s living rooms, and six games live, the first being an opening day game in Cape Town between France and Uruguay. We jumped a plane the next day for a 24-hour whirlwind raging party fiasco to see the USA’s first match against England in Rustenburg, then flew back to Cape Town and two days later saw a match between Italy and Paraguay. The next morning we drove more than 20 hours to Durban to watch Switzerland stun Spain in a 1-0 win.

Two days later, we scored some VIP tickets to watch Netherlands vs. Japan, including an open bar and free food.
But the USA vs. Algeria game in Pretoria was, hands down, the most amazing sporting event I have ever witnessed in my life.
Throughout it all, the beer has been flowing: Castle, Black Label, Amstel, Heineken, the World Cup’s sponsor Bud, and Jack Black.

We’ve sampled many of South Africa’s cheap whiskeys, our favorite being Clan MacGregor, which can only be drunk while speaking in a Scottish accent. We’ve woken up in all sorts of states including confused, wide-eyed, swollen-eyed, happy, hurting, and haunted in beds, on floors, in tents, in bars, restaurants, and in airports. We steal sleep whenever it is offered up.
We have painted our faces for numerous occasions with red, white, and blue mustaches, beards, flags, bombs bursting in air, and who knows what in an attempt to frighten the English, Slovenians, and Algerians. We have screamed, wailed, hollered, cried, booed, made fun of other countries’ national anthems (as they all seem to sound like a piece from ‘The Nutcracker’.) We have danced, I mean damn have we danced. We danced wherever there was music.We even danced when there was no music!

When the U.S. scored the third most amazing goal in their history against Slovenia, which was disallowed, we were watching the match at the Durban Fan Fest on a giant TV on the beach with about 100 U.S. fans. When that Edu goal hit the back of the net it was like ‘Lord of the Flies’ meets ‘Braveheart.’ We ran around the beach like crazies, hugging, screaming, cheering, laughing, some even began making out and lifting each other in the air. It was the coolest three to four minutes I have ever experienced at a sporting event. Then the goal was disallowed… cheaters!

But then there was Loftus Versfeld in Pretoria — the U.S. versus Algeria game. The vibe was low, our hearts sank as we awaited that final whistle knocking us out of the cup. Out of nowhere came Landon Donovon in the 91st minute to save the day again. All I can tell you is the place went nuts, I mean absolutely out of control. Beers and people flew through the air. Pure insanity. If you ever thought about being patriotic this was the time for it.

We’ve driven thousands of kilometers around South Africa. We’ve seen the Indian and Atlantic oceans, the Drackensburg Mountains, the deserts, and the townships. We’ve partied just about everywhere possible from Long Street to Florida Street, from Cape Town to Durban, Stellenbosch to Rustenburg, Jo’Burg to Pretoria, and we are only half way done. It’s only halftime, baby!