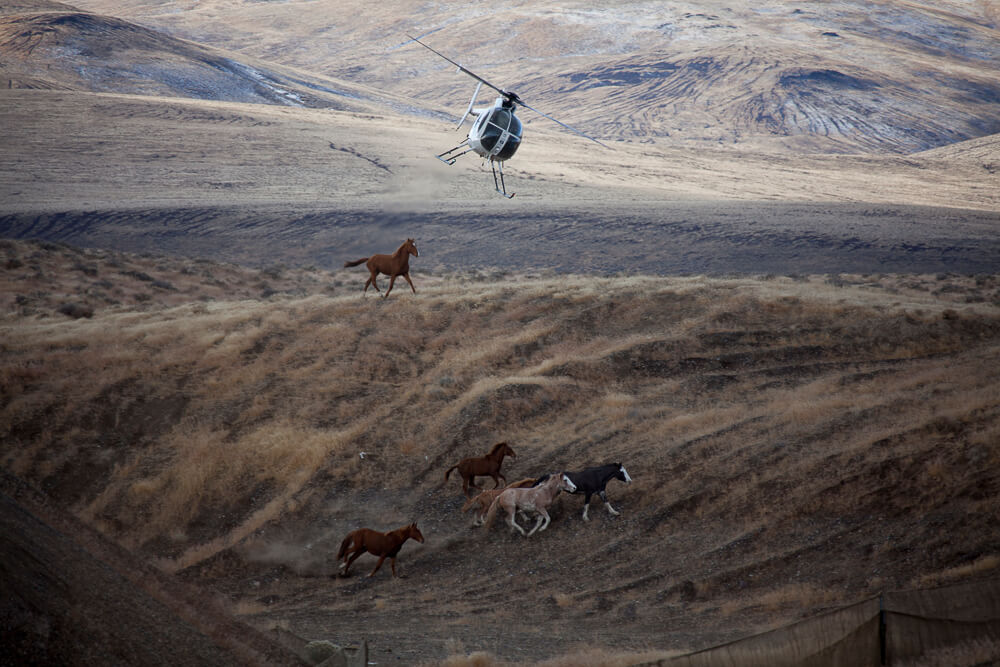 A minimum-security inmate at Carson City’s Northern Nevada Correctional Center (NNCC) was standing on top of his mustang in front of a crowd of approximately 200 spectators and potential buyers. The auction bidding had stalled out at around $1,500 and the inmate was determined to get the 8-year-old gelding he had spent the last four months training the selling price the animal deserved.

Several of the 33 pre-qualified bidders at the Feb. 20 Saddle Horse Adoption raised their numbered registration cards in the air as the auctioneer, Karin Costa, pointed to them while rattling off a series of prices that quickly eclipsed $2,000. The bidding slowed once again, prompting the inmate to leap off his horse to demonstrate another trick.

“Smile for the crowd,” he said. “Show them what a good horse you are.”

Right on cue, the mustang pulled back his lips into a comical showing of grinning teeth, drawing a huge applause from the audience — as well as a spike in the bidding. After a final bid of $2,900, Costa let out an emphatic “Sold!” as Hank Curry, the horse-whispering guru who trains the inmates to train the mustangs, commended the horse’s trainer for his fine work.

So why are inmates at the correctional center standing on mustangs and auctioning them off to the public? Good question …

In the 1950s, America’s wild horse (or mustang) population was in steady decline, largely due to the controversial practices of “mustangers” who were using snares and poisoning watering holes in order to round up mustangs and sell them for riding or to be slaughtered and processed for chicken feed.

In 1971, Congress unanimously passed the Wild Free-Roaming Horse and Burro Act, enlisting two federal agencies — the U.S. Forest Service and the Bureau of Land Management (BLM) — to protect, manage, and control the wild horse and burro populations across America.

At the time of the bill’s passing, there were approximately 25,000 wild horses left in the United States. In the 45 years since, the mustang population has grown to an estimated 58,000, with an additional 48,000 mustangs in federally funded holding facilities.

These numbers have created a quagmire that cannot be ignored. People on the pro-management side of the issue argue that the invasive mustang population is out of control, causing destruction of valuable natural resources that interferes with ranchers’ rights to graze their livestock — primarily cattle and sheep. The pro-wild horse side maintains that the mustangs should be left alone to live out their lives in the wild, claiming that BLM roundups and subsequent holding facility practices are unnecessary, uneconomical, and inhumane. Some also fear that the federal government will eventually find a way to sidestep the wild horses’ protected status and slaughter the animals by the thousands.

THE SILVER STATE OF AFFAIRS

The BLM can’t entirely appease both sides of the wild horse issue, but they have made a commitment to take care of every animal that they capture — whether finding it a home or maintaining it for the rest of its life.

Even so, the task remains daunting. Nevada is home to more than half of the free-roaming horses in the entire United States, with more than 5,000 mustangs between the state’s three holding facilities. Each horse costs approximately $48,000 to take care of for its 25-year average lifespan, meaning that federal taxpayers will fork over close to $10 million per year to maintain captive mustangs in Nevada alone. Considering that there are nearly 50,000 wild horses between 30 different BLM-contracted holding facilities across the U.S. — two-thirds of these horses get to live out their lives on grassland pastures contracted with ranchers while the other third are kept in feed lots — it became a top priority to start searching for new and creative ways to find these mustangs happy homes.

Originally introduced to the United States by Europeans, wild horses have become one of the West’s most complicated invasive species to manage. Their population doubles every four to five years, according to the BLM, although wild horse advocates dispute those numbers as falsely inflated.

“We’ve got about 60,000 horses roaming free on public lands right now, but our target management level, based on land use capacity and natural habitat conditions, is more like 26,000,” said Alan Shepherd, Nevada BLM’s state program lead for the Wild Horse and Burro Program. “We do our horse and burro gatherings in an effort to maintain a thriving ecological balance on the public lands that we manage. Our goal is healthy horses and burros on healthy lands. If we don’t control their populations, we can’t appropriately manage those lands.”

The BLM is thus faced with the difficult challenge of not only trying to responsibly manage the wild horse and burro populations and the lands on which they roam, but also seeking solutions that accommodate the land’s many uses and users in an ecologically and economically sound manner.

“We end up getting backlash from both sides. I like to describe it as the horses and the BLM being caught in the middle between two power struggles,” Shepherd said. “On one side, folks like livestock users and wildlife ecologists want better management. They want us to get our population numbers down so that our natural resources like water, vegetation, and wildlife aren’t damaged by too many animals — whether that be horses, elk, livestock, or bug infestations. On the other side, there are the pro-horse people who say, ‘Give the horses more land and more space. Get rid of the livestock and power mills and leave it to the horses.’ They’re getting better at understanding the impact the horses have on the land, but they can still be very opinionated about wanting thousands upon thousands of horses with little management.”

Finding a way for livestock and wild horses to share a limited amount of natural resources is at the center of the mustang controversy. Wild horse advocate groups like the North Carolina-based American Wild Horse Preservation Campaign (AWHPC) seek a way to keep wild horses and burros on the open range. These techniques include in-the-wild management practices such as safe fertility, improving range stewardship, and addressing resource inequalities, instead of the costly practices of gathering mustangs and maintaining them for life in holding facilities.

“The BLM program is inhumane and fiscally unsustainable. It subjects federally protected wild horses to the trauma of helicopter roundups and robs them of the two things most important to a wild horse — family and freedom,” said Suzanne Roy, AWHPC’s campaign director. “The BLM has created a crisis both on the range by failing to use PZP birth control [a form of wildlife contraception] to humanely manage populations without removals, and off-the-range by stockpiling nearly 50,000 wild horses in holding facilities. The program is geared toward creating a crisis that will make slaughtering the horses inevitable.”

The individuals and groups who prefer that America’s wild horses be allowed to roam free also claim that the BLM disproportionately favors the allocation of natural resources to livestock rather than wild horses. According to the AWHPC’s website, “of 245 million acres of public land managed by the BLM, livestock grazing is allowed on 160 million acres, but wild horses and burros are restricted to 26 million acres, which they share with livestock.”

In 2014, faced with a sudden spike in emergency horse gathers, largely due to wildfires across the state of Nevada, the BLM partnered with the NNCC.

The BLM found that the Nevada Department of Corrections had space to hold horses, and worked out an agreement to start training the animals. From there it evolved into the current Saddle Horse Adoption program, where between 70 to 100 horses are trained and adopted per year.

Hank Curry is the master horse trainer at the NNCC who oversees the inmates’ training of the mustangs. He handpicks around 20 horses four times a year from the 1,300 mustangs at the NNCC holding facility. The inmates then work with a specific horse over a 120-day period, spending eight hours a day working with their horse before the animal is offered up for adoption.

“I’ve been working with horses my whole life, but training people who have never been around horses before has been a new experience for me,” Curry said. “I take a lot of pride in my work — both in caring for the horses and getting to see how the men develop and mature as individuals through the program.”

Curry and his rotating crew of inmates are able to take wild horses that have never been handled by humans before and turn them into “green broke” horses with enough training and riding experience for their adopters to take home and begin working with immediately.

In addition to training horses for adoption by the general public, the Saddle Horse Adoption program maintains partnerships with the U.S. Marine Corps, Border Patrol, Forest Service, and Fish and Game, all of whom utilize the NNCC’s inmate-trained mustangs for their various applications.

“Game wardens like myself adopt these horses and help track poachers with them. It’s kind of cool to think about the process of how they’re captured by the BLM, trained by inmates, and ultimately used by wardens to protect wildlife,” said Jerry Karnow, who patrols Nevada County hunting grounds with the California Fish and Game Wardens Association.

On the other side of the horse adoption spectrum, Jamie Jennings is a dressage, cross-country, and show jumping competitor who drove all the way to Carson City from Phoenix, Ariz. to adopt her second horse from the program.

“I love to support this program and I think they do a wonderful job here with the mustangs,” she said. “It’s nice to know that the proceeds go right back into funding BLM adoption programs.”

While the wild horse and burro issue is complicated, the Saddle Horse Adoption program is one attempt by the BLM to reduce the number of mustangs in federal holding facilities and find the horses symbiotic partnerships with people who will properly care for them.

“I just see it as a great opportunity for the horses, the BLM, the prison, and the prison inmates to work together and provide something really important for each other,” Karnow said. “The program allows the inmates to develop a significant sense of responsibility for their animal.”

To learn more about the auctions and inmate training program by the BLM, search for the Wild Horses and Burros Program on the BLM website.