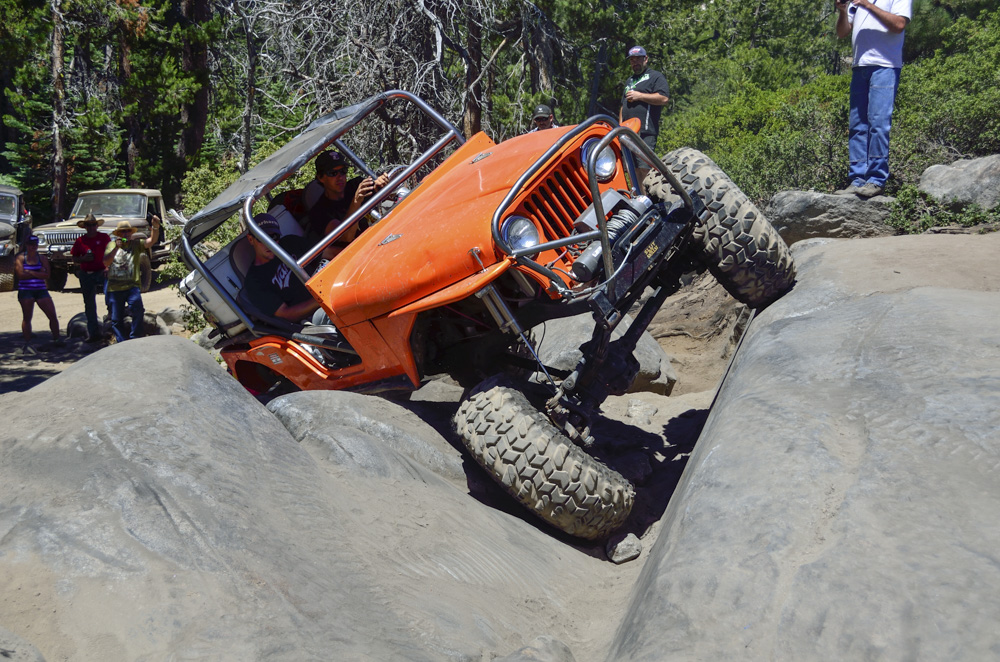 With a small crowd and trail guide watching, the Jeep’s knobby 33-inch tires pushed against the 2-foot boulder. Contorting like a twisted ice tray, the Jeep’s frame rolled to one side and back. “Hold up, you got it, don’t back up!” commanded the guide who doubled as the Jeep’s mechanic. The driver backed up.

By definition off-road driving is rough going and problems occur. The shiny Jeep Wrangler came down hard on its chassis, and the observers let out a collective groan as steel met granite. “Ayup, you’re on your belly,” said the mechanic, and a few guys shuffled off to hitch the rig to a nearby Jeep to pull it free.

I was attending the 63rd annual Jeepers Jamboree on the 22-mile Rubicon Trail that empties south of Homewood on the West Shore. Once considered the toughest off-road trail in the world until drivers progressed  to tougher challenges, it is still the most famous one.

Jeep drivers are attracted to the backcountry access OHV (Off-Highway Vehicles like Jeeps, dirtbikes, and ATVs) rigs can provide the challenges of driving, and the technical aspect of modifying the vehicles. However, the OHV community and other outdoor enthusiasts are at odds over how to best use the lands.

Environmentalists are concerned about an array of impacts from OHVs, including erosion, damage to water sources, garbage, human waste, leaked fluids, drivers going off trail, and more, including the idea of nature’s solitude being interrupted.

“It’s a conflict between passive recreation like hikers and OHV users. It gets to the idea of quiet recreation,” said Don Rivenes, the secretary and treasurer for the Forest Issues Group, which has taken legal action with the Tahoe National Forest on OHV trail designation.

There are several off-road clubs around Tahoe, and a few organizations dedicated specifically to the Rubicon Trail. While the groups realize the heavy impact their choice of recreation can have, they contend they are advocates of responsible stewardship, have a right to be on the public lands, and are highly involved in working to maintain the trails mainly through thousands of volunteer hours every year.

Doug Barr, administrator of the website theotherrubicon.com, believes the biggest impacts from OHV use have seen a concentrated effort towards being fixed over the decades. “The main issues of garbage being left behind, driving off the designated trails, and human waste have gone down largely through better education of OHV users,” said Barr, who volunteers often on the Rubicon.

The Rubicon Trail Foundation and its volunteer arm, Friends of the Rubicon, have a combination of paid staff and volunteers that are out on the Rubicon every day during the busy season to offer information to OHV users, according to Vice President John Arenz. Despite these efforts, some OHV proponents still feel marginalized.

“Sometimes it feels that everyone seems to hate us,” said John Herrick, the editor-in-chief of Crawl, an off-road magazine out of Reno. Herrick believes there is a misperception of the off-road community as a loud, obnoxious, disrespectful group, and they’re not given due credit. “People in power don’t see us as legitimate stakeholders. We aren’t seen in the same category as the other user groups like hikers and bikers.”

People like Barr claim they are actively seeking to help the Forest Service but are thrown off by a lack of cooperation. “I want to do volunteer work on Forest Service land and help the efforts, but sometimes the agencies won’t get back to me. It’s hard to communicate with them,” Barr said.

At least as equally frustrated with the public process is Karen Schambach, who has been advocating for OHV regulation for years as president of the Center for Sierra Nevada Conservation. “It’s inherent that when you have big wheels on steep soil you will have erosion, but the bigger problem is lack of proper management on public lands,” she said.

Schambach believes that much more attention is needed for trail maintenance, but the budget and political willpower falls far short of what’s needed. “The Forest Service, Bureau of Land Management, and State Park systems don’t appear to be willing and able to do what’s needed,” Schambach said. “It requires a huge political will to counter the off-road groups.”

Mike Gabor, the head of the engineering department for the Lake Tahoe Basin Management Unit, which manages 22 miles of OHV trail including part of the Rubicon, welcomes input from all user groups. He believes the main challenge is the large amount of conflicting interests, often times not between motorized and non-motorized interests but differences of opinion within the same user group.

“We try to understand all the different interests and different ideas within the OHV world, and try to provide opportunities for all the OHV trails within the LTBMU,” said Gabor.

Gabor agrees that partnering with those in the OHV community to work with the LTBMU could be a beneficial way to steer down costs to the Forest Service, and looks to strengthen those partnerships.

“We have a much stronger program going where we work with hikers and others in the non-motorized group as volunteers and we encourage people to contact us with ideas on how to increase that component with the OHV crowd,” Gabor added.

A Timeline of Tension

Due to the differing opinions, several conflicts have emerged on the Rubicon Trail and nearby areas related to OHV use.

In 2000, the Lahontan water authority issued a cease and desist order for sections of the Rubicon Trail that crossed streams. It cited erosion and water quality concerns. The order nearly closed the Rubicon but also inspired a volunteer effort comprised of 200 people that moved 180 tons of crushed rock in two days to mitigate the impact of driving over streams.

Several years later in July 2004, the El Dorado County Board of Supervisors issued a state of local emergency from the amount of human fecal waste associated with OHV users around Spider Lake on the Rubicon Trail. Spider Lake remains closed to OHV use, and off-road groups have responded by giving out WAG BAGS (portable toilets) to trail users, and installing sanitation units on the trail.

Then in 2009 a clean up and abatement order (CAO) was issued by the California Regional Water Quality Board for the Rubicon Trail, which again threatened closure. This order started from two cross country skiers who objected to wintertime OHV use on the Rubicon. The order cited that “the Rubicon Trail is not adequately drained and maintained. Runoff from the trail has discharged sediment and other waste into waters of the state.” As a result, El Dorado County received grants to set in place a multi-year plan to clean up the trail, and in 2014 the order was rescinded.

Most recently, in 2012, the Center for Sierra Nevada Conservation sued the Forest Service for 42 roads that allegedly crossed meadows and went against regulations in El Dorado National Forest. The Forest Service’s subsequent study on the roads in question found that 24 of those trails did not cross meadows and were reopened, but the other 18 have remained closed.

Cases like the closure of the 42 roads draw the ire of OHV proponents who are frustrated that 24 trails were closed for years and then found to be legal, while those who wish to limit OHV use see victory in the 18 trails that were found to be in violation of the law. Additionally the CAO was seen as illegitimate by many in the OHV community, but in the end it created improvements. These incidents highlight the push-pull nature of the OHV issue, where litigious action may induce improvements on the trail and spur grant money, but also create a threat of what OHV proponents see as unjust closures.

Ultimately, off-road enthusiasts share common ground with outdoor enthusiasts, in that they want to be on these roads for the same reason — to experience nature.

“I look at a broad expanse and see possibilities. Where do I want to go and what do I want to see? I’ve been going places I’d never thought possible,” said Herrick with Crawl.