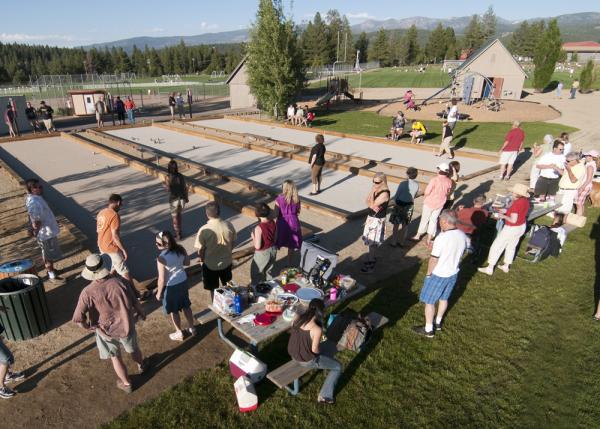 Is it me or did Tahoe drop out of a pleasantly wet spring like it was hucking the ‘Ring Finger’ on KT-22, landing dead flat into a scorching weather pattern? The searing sunshine has left this abominable snowman running for cover midday, but cherishing every minute of the golden hours of late afternoon and evening. And I know I’m not alone.

A lot of activities and athletics go down around here in that epic early evening window when the light is just right and the temps are perfect. Plenty of group bike rides begin then, as do rounds of golf, but these favorite Tahoe pastimes aren’t the only social sports making the most of good company until the sun sets.

If you were to judge by interest, attitude, and recent infrastructure improvements, the summer sport of the year in this primetime Tahoe time slot just might be bocce ball. Odds are this is old news to you, though. With four bocce leagues in Truckee and North Tahoe alone, you’re probably running off to bowl and shoot the breeze courtside right now!

Lawn bowling has been around since the ancient Egyptians and was passed on to the Italians, who developed the bowling discipline now known as bocce. One would think that an easy-going activity like bocce wouldn’t mesh with our typically hard-charging Tahoe athletic atmosphere, but with competition as the common denominator and game pacing perfect for partying, or rather picnicking, the phenomenon is gaining lots of local fans.

The simple gist of the game of bocce is that a target ball, called a jack or pallino, is rolled to one end of the long rectangular bowling court. Each team then alternately tries to bowl its four balls closest to the target ball. Points are only scored by the team whose ball is the closest to the pallino after all eight balls have been thrown. One point is awarded for every ball the team has closer to the pallino than the opposing team’s closest ball. A measuring tape is used to determine distances between balls, and games go to 13 points, with the best of three games deciding an overall winner for the match.

To park a bocce ball cheek to cheek with the pallino after bowling it 40 feet down the court takes a calculated toss similar to that of shuffleboard — not too hard and not too soft. A patient but confident toss will usually beat an aggressive bowl as any balls that hit the backstop are taken out of play.

Bocce’s popularity is no doubt bolstered by the fact that the basic bowling skills are easy to learn and the court is dead flat. All ages and even the invalid can play without much trouble. Mastery over your bocce ball is an entirely different story, however.

It takes a well-practiced bowler to accurately place your throws round after round, not to mention the defensive strategies that expert players employ, such as throws that purposefully knock the opposing team’s balls out of position.

Stepping foot on the crushed oyster shell surface of a bocce court definitely doesn’t require cleats or protective gear. Quite the opposite, in fact. The tradition is to dress sharp when you bowl. That’s when those fine summer evenings come in handy, letting the ladies truly ‘sport’ their favorite dresses.

The good times don’t depend on your uniform, however. No matter what you wear, you’re invited to join in the potluck-style picnic that accompanies most games. On a team of three or more players, you won’t be bowling every round, leaving plenty of time to feast on that spinach dip or gulp down a glass or two of what one veteran Truckee team calls ‘The Aiming Juice.’

Local competitive bocce opportunities are everywhere if you register early enough. The Truckee Donner Recreation and Park District has run a bocce league at River View Sports Park since 2007 and consistently fills three leagues soon after registration opens. Tahoe Donner’s three courts see equal action with a packed Tuesday night league. The Truckee River Winery and Wolfdale’s each installed new bocce courts last year and wasted no time setting up respective leagues. The Winery’s league is full but they are offering a special Full Moon Glow Ball Bocce Tournament on July 28. Wolfdale’s July league is in full swing, but there were a few spaces left in the four-week August session as of press time.

Aspiring players who want to bowl on a regulation bocce court have plenty of options as well. Truckee’s River View Sports Park courts are open for public play anytime except Monday, Tuesday, and Thursday nights, and balls are available to borrow at the TDRPD office. Tahoe Donner is the same, offering free bocce for both residents and guests anytime outside of the Tuesday league night. Playing a game or two at the Truckee River Winery or Wolfdale’s is complimentary for customers, so order drinks and apps and the court is all yours.