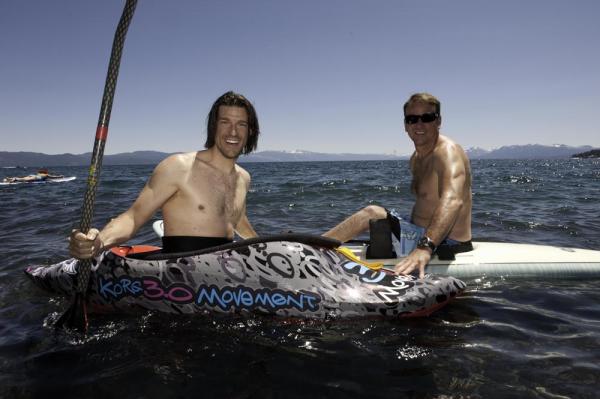 Paddling 50 miles around Lake Tahoe in four days may sound difficult, but itâ€™s nothing compared to the challenges John Davis and Grant Korgan will face at the South Pole. The two adaptive athletes, who both suffer from spinal cord injuries, are circumnavigating the lake this week on kayaks and stand up paddleboards as a training exercise in preparation for their journey across the Antarctic in January, where they will push themselves 100 miles in sit skis across the frozen landscape. A few things they wonâ€™t have to worry about while on the lake that will be major issues at the South Pole: frostbite, being in the coldest and windiest place on the planet (temperatures, with wind-chill, have reached negative 70 degrees Fahrenheit), and sastrugi, wavelike ridges of hard snow created by gale-force winds that will make skiing across the tundra anything but easy.

But for Davis and Korgan, itâ€™s all part of the reason theyâ€™re doing â€œThe Push,â€ the name of their mission to the South Pole in honor of the 100th anniversary of British explorer Robert Falcon Scottâ€™s expedition to the bottom of the earth. Their goal: inspire people of all walks of life to push past their own limits and achieve their full potential and dreams.

â€œWith this Lake Tahoe paddle training event, as well as the overall mission of â€˜The Push,â€™ we hope to inspire people of all walks of life that they too can achieve the seemingly insurmountable,â€ said Korgan, who is kayaking. â€œWe encourage them to push their own everyday limits and live up to their ultimate potential.â€

Davis, a 40-year old Truckee resident, is a two-time Paralympic gold-medalist who has been paralyzed from the waist down since a car accident at the age of 19. Korgan, 33, who grew up in Incline Village and now lives in Sparks, is a world-class kayaker and adventurer who fractured his L1 vertebrae while snowmobiling in the Sierra backcountry last year. â€œThe Pushâ€ team is also made up of guides Doug Stoup, who has been leading teams across Antarctica for over 10 years, and polar guide Tal Fletcher, both from Truckee. Stoup and Fletcher will be on stand up paddleboards for the Tahoe event.

â€œPaddling Lake Tahoe is a soulful experience,â€ said Davis, who is on an adapted stand up paddleboard. â€œYouâ€™re completely surrounded by snowcapped peaks while sitting atop tranquil waters so clear that you can literally see 75 feet down. But the lake also makes for a fantastic cross-training venue as weâ€™ll be paddling approximately 96,800 paddle strokes, just more than half the 176,174 pole pushes required to trek 100 miles across the frozen landscape to the South Pole.â€

The public is encouraged to join the paddle, whether for an hour or a full day, to cheer on the team via kayaks and stand up paddleboards.

Day One: The group, which launched today at 6 a.m. from Sunnyside on the West Shore, will paddle clockwise 7 miles to Carnelian Bay. They will land just before noon at a lakefront estate for a private presentation. From there, the team will paddle to Watermanâ€™s Landing in Carnelian Bay for a quick stop before continuing onto Tahoe Vista, completing leg one (10 miles total) at Mourelatos Lakeshore Resort at 5 p.m. This landing is open to the public and will include live music, along with free stand up paddleboard and kayak rentals and demonstrations. Itâ€™s also where the team will overnight.

Day Two: The second day is a much more difficult leg with â€œThe Pushâ€ team departing at 8 a.m. and paddling 16 miles along the North Shore and camping lakeside that evening on the East Shore. The film crew will accompany them on a powerboat, and will follow the group to document the entire journey. Live Internet dispatches will also be made available to the public during this training event, as they will be at the South Pole.

Day Three: The film crew will continue to follow the team on the third day, with another long stretch of paddle, 12 miles, from the East Shore clockwise along the lake to a campground on the West Shore.

Day Four: Friday, Aug. 12 is the final day of the trip, and is one of the best ways for the public to get involved and cheer on the team from the ground. Davis, Korgan, and company will paddle 12 miles, arriving at the historic Ehrman Mansion at Sugar Pine Point at noon for a picnic lunch. The team will close the loop on circumnavigating Lake Tahoe, ending their 50-mile paddling exercise with an official landing at Sunnyside around 6 p.m. for a small, intimate dinner.

â€œThe Pushâ€ Lake Tahoe Paddle Event is the second training mission for the athletes, who visited Norwayâ€™s Svalbard arctic archipelago this spring. A third training session hits the ice in South America this September, with a final training event in Nevadaâ€™s Black Rock Desert in October. â€œThe Pushâ€ is targeting a documentary film release for summer/fall of 2012. To follow the journey of â€œThe Push,â€ visit southpolepush.com. To see a video of their training mission to Norway, click here.

â€œThe Pushâ€ is in support of the High Fives Foundation, a Truckee-based nonprofit organization whose mission is to help winter athletes suffering life-altering injuries get back on their feet, and back to their sport.