Home Sections Sports On Your Left 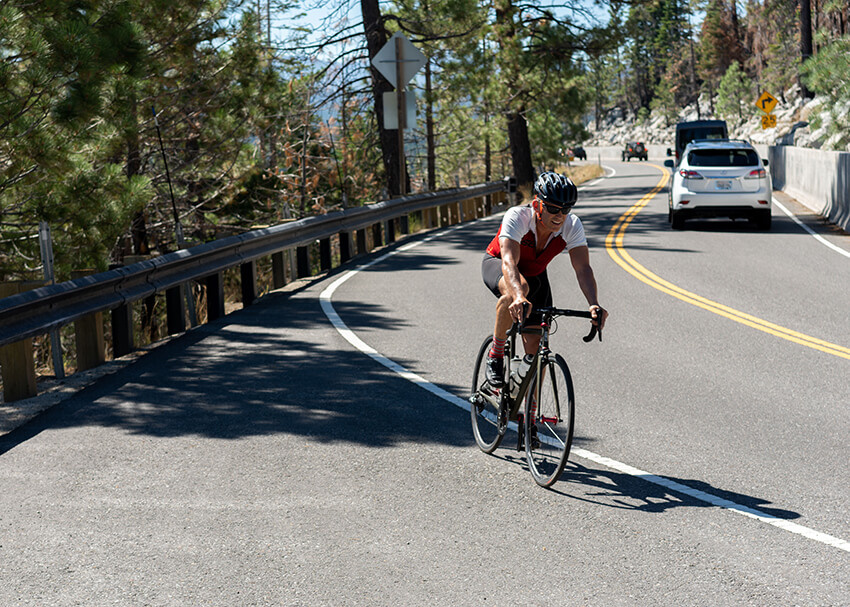 It happened again this summer. A man riding the bike lane on California Highway 89 between Squaw Valley and Truckee was struck and killed by a driver. Many Tahoe riders cringed when they heard the news, because every time they ride they feel palpable fear that someday it might happen to them. They just hope the driver behind them is paying attention.

Most bike safety solutions are simple and straightforward. Getting those solutions implemented, however, is a challenge because their success relies on education and behavioral changes — and most of us would rather have other people change instead of looking in the mirror. If cyclists are to be safe, there is a need for change by all of us: bike riders, drivers, and pedestrians.

Truckee Trails Foundation Board Member Paco Lindsay says to begin with, we need a cultural switch so that drivers understand that “roads are not just the domains of cars; cyclists have a right to be on the road as well.” In fact, riders’ lives depend upon having roads that are free of distracted drivers. “Everyone keeps talking about it, but fines are pretty small for distracted driving and texting,” Lindsay said. “That is the first issue that needs addressing.”

Officer Jeff Billings of the California Highway Patrol in Truckee says that biker safety really comes down to common sense. For bikers this means: Follow the rules of the road, stay to the right, pay attention to what is going on around you, and anticipate what traffic is doing in front of you. For drivers, it’s all about paying attention and not talking on the phone or texting while driving.

“Local drivers should be well aware that there will be a lot of people on bikes in the summer. When driving, anticipate seeing someone on a bike,” Billings said. He explained that sometimes because of debris, expansion cracks, or potholes on the side of the road, bikers may have to quickly merge into the traffic lane to avoid obstacles. Drivers need to remember this and give at least the legally required 3 feet of room when passing a cyclist.

Many drivers exclaim rather ferociously that bikers should be on bike trails. The reality is that while bike trails (now often called multi-use trails) serve an important purpose, “there is a safety problem on bike trails,” said Sue Rae Irelan, a local bike advocate. “Our bike paths are not a very safe facility to force bicycles and pedestrians together. People are walking their dogs on a long leash, strolling their babies, walking in groups taking up the whole trail.”

The North Tahoe bike trails encourage people to ride on the right and walk on the left with signs painted at every intersection to remind them.

A lack of understanding of the rights that bikers have, and the issues they face on the road, is part of the reason for some drivers’ animosity toward bikers,

but poor behavior by some riders doesn’t help. Riders sometimes ride two abreast on busy roads, or plow through busy intersections without stopping.

Officer Billings remembered an uptick in bike crashes when Ironman athletes were training for the event here a few years ago. “There were all these tri-bikes riding through Tahoe City as fast as cars, riding between traffic and parked cars with their hands nowhere near the brakes,” he said.

“Safety messages need to go out to every user out there,” Irelan said.

The Lake Tahoe Bicycle Coalition, through videos, public service announcements and its website, encourages some simple basics for bikers: Bike the same direction as traffic; be visible using lights, reflectors, and bright clothing; stay as far to the right as road conditions allow; ride single file; obey traffic laws; wear a helmet; use proper hand signals; and don’t ride with music blaring in your ears as you will be unable to hear traffic.

The Tahoe Regional Planning Agency (TRPA) is working on bike safety as part of its Lake Tahoe Safety Plan. The organization has collected data on where the most crashes are occurring and is “trying to fix areas where we see a lot of crashes,” said Morgan Beryl, senior transportation planner with the TRPA. Sometimes this involves installing rumble strips to guide wary drivers back onto the road, as well as realigning road intersections and providing lighting in key locations.

Many bike advocates, including Irelan, say that a real key to improved cyclist/driver interactions is increased maintenance and vigilance among road agencies. “It’s so much more important to have bike lanes maintained than the road,” Irelan said. “Things that are a big deal for a bike don’t matter to a car. Frost heaves that rise up a half inch become a hazard that you must swerve out of the bike lane to avoid.” Maintenance also means sweeping, removing debris, repairing potholes, and trimming vegetation from the side of the road. And it means road crews need to get out early in the spring to stripe the bike lanes.

All of these solutions have one thing in common: Caring about the life of cyclists. Bike riders are not obstacles on the road, they are mothers and fathers, brothers and sisters, people who are deeply loved. They are folks getting exercise while relieving traffic by taking one car off the road.

On Your Left
Community / Sports & Outdoors

On Your Left
Sports & Outdoors
All Day