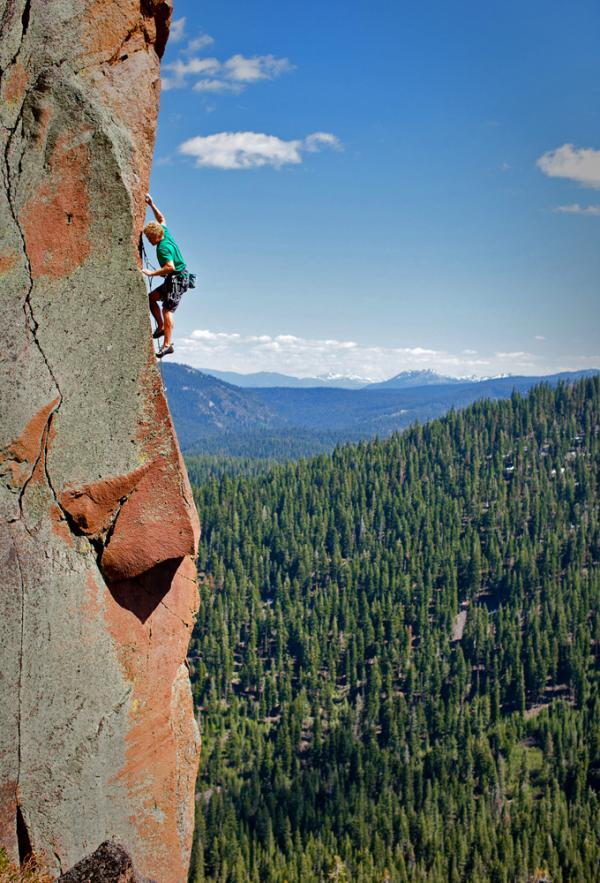 Though it’s usually a pleasure to repeat your favorite rock climbs, nothing beats climbing a route for the first time. The suspense of figuring out the moves necessary to conquer a new line up the wall is one of the many addictive thrills of rock climbing.

Local rock climbers are in for a spectacular summer of such virgin experiences thanks to the recently released ‘Local’s Guide to Rock Climbs of North Tahoe.’ This new rock climbing guidebook, authored and published by John Jackson, details more than 1,200 local climbs including 700 routes that were previously undocumented.

Jackson spent 16 years and nearly 6,000 hours researching climbing areas around North Tahoe before publishing the ‘Local’s Guide.’ He’s condensed his findings into a 475-page tome that not only brings to light obscure climbs at known areas, but also introduces several entirely new climbing crags. One of the new climbing zones had been a local secret for 16 years — the Deep Creek Crag, which is located off Highway 89 between Truckee and Squaw Valley.

‘The ‘Local’s Guide’ will open up a lot of unknown places for climbers to explore and hopefully lessen the crowds at some of the better-known spots,’ said Jackson. ‘Many of these previously undocumented crags are at least as good as the currently most popular crags.’

The guidebook is organized by region, starting with well-known North Shore locales like Donner Summit and Big Chief before branching out to climbing areas in Reno/Carson City to the east and Eagle Lakes to the west. The introduction to each section details the climbing history of that area and provides detailed access information. Every route has a number referencing a picture of the line on a color photo and most routes also have a written description including length and gear recommendations.

The accuracy of the information in the ‘Local’s Guide’ seems spot on. That said, the book is not perfect. A few dated photos and minor numbering errors are no doubt signs of Jackson’s enduring but difficult effort to publish the book over the last two decades. The delay is no matter now, though; Jackson’s secrets are out and definitely worth checking out, warts and all.
So what are some of the best new climbing areas revealed in the ‘Local’s Guide?’

‘With over 20 new spots documented that is really hard to answer,’ said Jackson. ‘For those that prefer climbing on granite, the Shirley Lakes Cliffs in Squaw Valley are hard to beat, but my personal favorite new crag is the Deep Creek Crag. The Deep Creek Crag is similar in rock quality to Big Chief, but the average height of the routes is taller.’

Jackson has self-published the book as the first in a series of rock climbing guidebooks he plans to produce. The next edition of the ‘Local’s Guide’ series will cover climbs in Northeast California including the Sierra Buttes and crags near Susanville.

The ‘Local’s Guide to Rock Climbs of North Tahoe’ costs $40 and can be purchased at Alpenglow in Tahoe City, Tahoe Mountain Sports in Kings Beach, and the Backcountry in Truckee. It is also available online at camp4press.com.