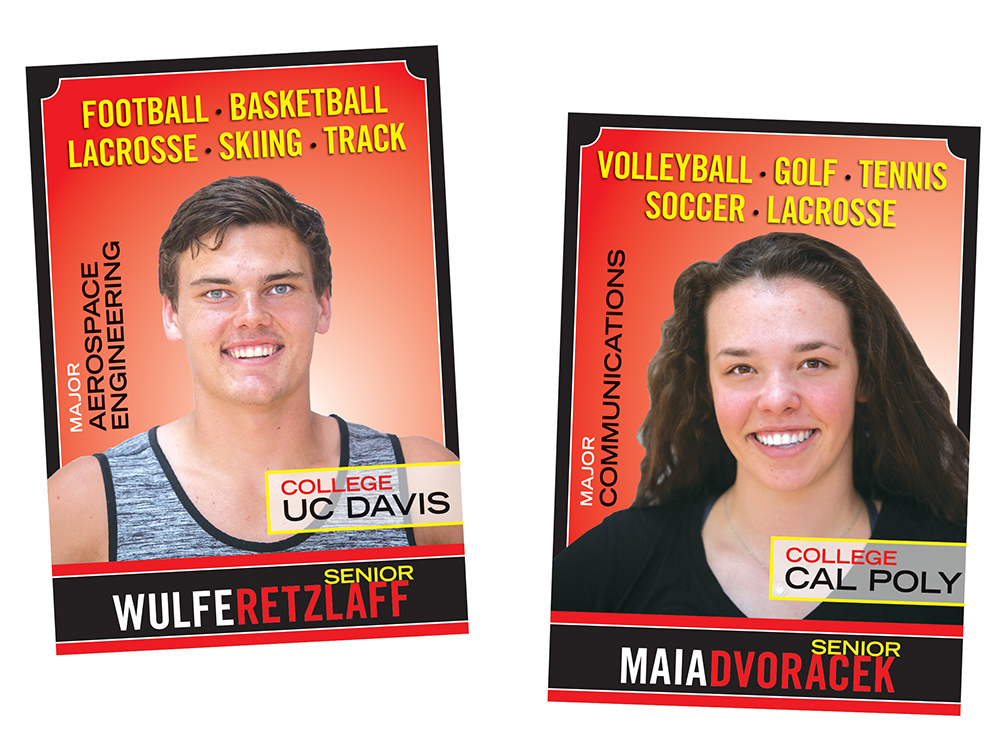 Blood, sweat, tears, two-a-days, epic wins, mercy rules, early morning bus trips and late night study sessions; high school sports are a staple of the American experience. It’s on the field that many students meet their closest friends, practice commitment, and learn to balance their passions while maintaining a healthy GPA — not an easy task when you’re constantly missing class due to traveling for competition.

Truckee/North Lake Tahoe has a thriving high school prep sports scene, and one that is also unique because of its mountain environment. Most years (especially this last winter) the fields that students practice on are covered in several feet of snow, and the athletes train indoors to then go on to compete against kids that have been training outside the whole winter. Although Truckee and North Tahoe high schools are in California, they both compete alongside Incline High in the Nevada division — a detail that goes unnoticed when they lose, but can be quite controversial when they win, such as when the Truckee High football team won four straight state championships (2009-2012) under the late coach Bob Shaffer.

With the school year wrapping up, the snow melting off the fields, and playoffs approaching, we decided to take a closer look at what high school sports mean to our community, and the students who participate in them. For this, Moonshine Ink tracked down students from Truckee, North Tahoe, and Incline high schools who have demonstrated a stand-out ability to succeed both on and off the field.

WULFE RETZLAFF has participated in lacrosse, basketball, skiing, and track, and says he’ll probably be going to state for shot put and disk, but his main passion is football, where he had a career total of 372 sacks, 1,454 rushing yards, and 21 touchdowns. Retzlaff will continue on to the University of California, Davis football team in the fall, where he plans to major in aerospace engineering.

What are some tips you’d give incoming freshmen to succeed?

Make your goal as soon as you can and do anything you can to stay on track, because a lot of people lose sight of their goal because some people tell them they aren’t good enough, or they don’t have the ability to do it. Honestly, what I did was forget all the white noise, keep on chugging along, and that’s where I’m at now.

What has your experience been with Truckee’s Athletes Committed program?

If you want to be committed to a sport you have to be committed to getting your body in shape so that you don’t let down the teammates around you. My sophomore year I was brought up to varsity for football. We had a drug and alcohol accident halfway through our season and it just tore up our team. I remember thinking, “I do not want that to happen again,” and I bought into Athletes Committed full-go.

MAIA DVORACEK has played golf, tennis, soccer, lacrosse, and “basically anything else you can think of,” but it’s her passion for volleyball that stuck. She’s now rated 11th in the state of California. Maia will be competing in volleyball with a full-ride scholarship to California Polytechnic State University to major in communications.

How did you first find a passion for volleyball?

I started playing club volleyball in fourth grade, but I used to go to the beach and wait for people to let me on the sand court so I could play with them. I fell in love with it. My brother was a really good ski racer, so when I was a skier I was always under his umbrella, and I wanted to find my own thing.

How do you find the balance between athletics and academics?

Not a lot of sleep … Time management was huge, and making sure when I got home I’d do my homework, because then I have to get in the car for two hours to go to practice. I knew that practice is important, but you can’t go to college if you don’t have good grades even if you’re the best athlete out there.

QUINN LEHMKUHL has endurance on lock, and won the state individual championship in both cross-country skiing and running this last year, in addition to two previous cross-country running state champion titles. She plans to compete in Nordic skiing at University of Colorado Boulder, where she will major in integrated physiology to pursue medicine.

What is it about long distance sports that draws you?

I love the team and the people that do it. You have to kind of be a certain type of person to be able to do the distance sports, so they’re really hardworking and I really like that aspect of it. It’s a smaller community, I think, that does these sports, and everybody has the same ideals.

How have endurance sports shaped your life?

They’ve taught me dedication and that what you put in is basically what you get out. Failure is not the end, so even if you don’t do as well as you wanted to, or as well as you thought you can, get back up, try again, try harder, and do better next time.

TRENT LINGRUEN has played baseball, soccer, and football, but his sport of choice is basketball, which he will be moving on to play at Santa Barbara City College. He is considering marketing or business as a major.

How have high school sports shaped your life?

It’s basically where you meet all of your friends; there’s not a big party scene if you’re involved in team sports, and I don’t want to say “drama,” but there is less of that.

What advice would you give to incoming freshmen?

They need to learn to not get so down on themselves. It’s like with this year’s freshmen, we lose a game like we did today, and they all hang their heads and think it’s all over. They just need to understand that it’s just a sport and it’s a lot of fun if you don’t get down on yourself.

CONOR NIX has his hands in everything from football to basketball to track to jazz band, and is an Eagle Scout as well as a student council member. He is looking to walk on to the San Diego State University football team in the fall where he plans to major in music or film production.

Why are high school sports important to you?

For many people — if they aren’t as social — if they join a sport, that’s a good first step to meeting other people. And you might fall in love with something, like a sport that you really love to play, and I think high school is the best time to go out and do a sport.

How do you find the balance between school and sports?

Even though athletics are extremely important to me and I always love playing sports and being active in general, I always make academics the priority over everything else because that’s what really drives you forward if sports don’t work out.

KATE RYE is a dedicated cross-country runner as well as one of the top swimmers in Nevada, and is the individual state champion for the 50 yard freestyle. She has a 4.0 GPA, and although a junior, already has a wide spread of colleges she has been conversing with.

What is it that draws you to swimming?

Even if I’m super stressed or I had a bad day it always makes me happy no matter how hard it is. I like the competition of it, and how even though it’s an individual sport, you get to practice as a team.

With one more year to go, where are your sights set on the future?

I have been talking to some schools about swimming in college because that’s definitely one of my main goals. I would like to go division one, so I’ve been talking to University of Nevada, Las Vegas; Seattle University; and a couple of schools down in in San Diego. Even though I still have another year, I really like the idea of going into communication sciences and speech and language pathology because I’ve always liked helping people, but I’m not a big fan of blood and bones.