Comedian Daniel Tosh has a line that mocks the idea that money can’t buy happiness.

I think of that joke every time I see what’s called a motorized snow bike, or as they’ve become known, Timbersleds.

How can it not be fun?

Powersports company Polaris owns the brand name Timbersled, but the name has become the universal term for this hybrid machine, like Kleenex and Xerox. It sounds like something every lumberjack needs.

Polaris leads the category, selling kits that can transform most dirt bikes into one of these Mad Max-inspired powder-hunters in a few hours.

Typically kit-built from a dirt bike, a Timbersled exchanges the front wheel for a single ski attached to the shocks. The rear drivetrain is replaced with a track system. Come spring, simply swap it all back and hit the dirt trails.

Prices range from around $2,000 to $7,500 and are categorized by skill level and the type of terrain a rider plans to tackle.

If necessity is the mother of invention, then the motorized snow bike’s roots can be traced back to someone who needed to have more fun in winter. (Who in Tahoe would question that logic?)

However, the someone behind these machines was actually two someones: Allen and Natasha Mangum, an Idaho couple known for designing custom equipment for riding snowmobiles in steep, challenging terrain. The Mangums tinkered for years with the idea, and even came up with the name.

According to timbersled.com, production started a year after a 2009 prototype gained traction. By 2015, Polaris sought to acquire what the Mangums had created, and motorized snow biking officially had all the horsepower it needed to carve trenches into the winter powersports market.

That same winter, Truckee’s Daron Huck discovered what Polaris was so keen to acquire.

“A good buddy I worked with just happened to throw down and buy one,” said Huck, owner of local powersports rental and touring company Tahoe Dirt Bikes.
“I immediately ordered one, built it, and started renting it.”

Huck was in the early days of his company at the time, but knew he saw a new way to help people enjoy Tahoe winters. “I ended up buying five that spring,” he said.

He explained that snow bikes have a mellow learning curve for anyone who already knows how to ride a motorcycle.

“You can get on one of these and figure it out in about 15 minutes,” Huck said. “You can go a lot of places on your first day with a Timbersled, especially off-trail, through the trees. Whereas with a snowmobile, it takes a while to get comfortable off-trail.”

The intrinsic agility of the Timbersled offers unique opportunities for riders to maneuver among snow-strewn trees, a set of characteristics that likely led to the brand’s identity, and what makes them so addictive to ride in the backcountry.

It’s not just the thrill of filling the air with cold smoke that makes snow bikes such a winter thrill. Huck says they make spring hardpack a bunch of fun, too.

“Every snow condition is different, like the heavy wet stuff can be easy to become stuck [in],” Huck said. “But come spring, mid-morning, when the snow is all set up and firm, that’s probably the condition when these things really shine.”

As in skiing, being able to set an edge is important.

“When the snow surface is firm, it’s harder to put a snowmobile on edge, off-trail,” he said. “But with Timbersled, it’s just so natural.”

Huck says he still enjoys getting out on his snowmobile, as each vehicle performs in its own way.

“For experienced motorcycle riders who want to come up here and try the Timbersled, they’re going to have a successful trip.”

Huck relayed the story of one guest who seemed rather stoic about an upcoming tour, seemingly skeptic of this unique snow play machine.

“They took them out on their own, and this one big guy, he didn’t have much expression or anything. But when he got back, he gave me a big hug. He loved it.” 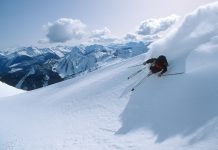