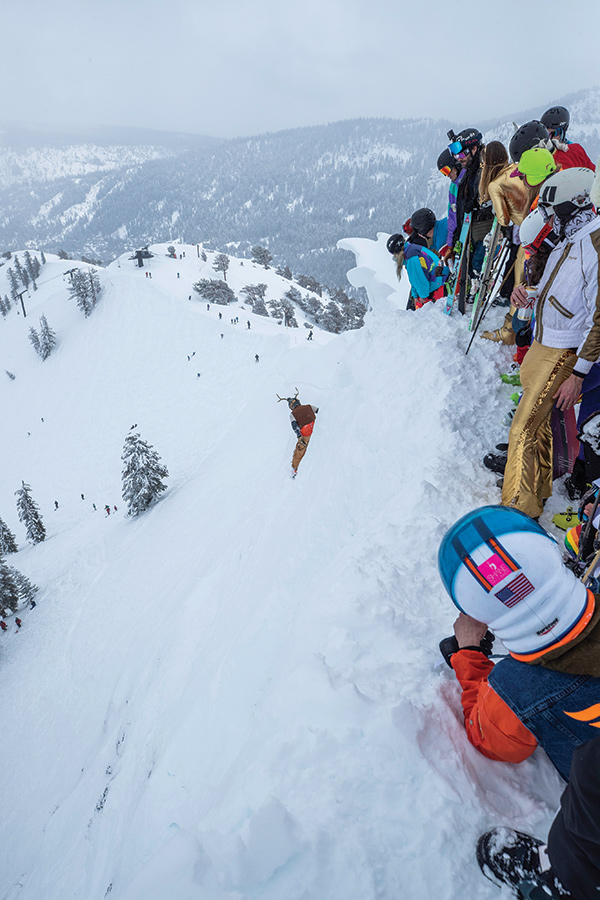 Just prior to the turn of the millennium, freeskiing blew up. A charismatic California kid with a Tom Cruise smile catapulted freestyle skiing to the world stage with a gold medal in Nagano, Japan, and magazine covers with Cindy Crawford. The stagnant “old school” era of hop turns and skinny skis was in the rearview mirror.

American downhillers flashed lines in remote Alaska in five turns that were previously skied with 50. Shane McConkey skied them in zero turns, sometimes naked. Squaw Valley’s CR Johnson stomped a 1440 in the Riviera Park, a zone known as a “snowboard park” rather than today’s terrain park.

As badass as skiing was proving to be, skiers were struggling to find their identity. They knew that snowboarding was first to popularize such things as landing backwards on snow, grabbing and even floating on powder. Even more to their chagrin, skiers knew that given snowboarding had roots in skateboarding, it was inherently skiing’s far cooler counterpart.

New-school skiers sure tried to be cool. Gold chains, baggy pants, dyed hair, rap songs, fancy cars, facial hair, mean-mugging portraits, and attitude. Skiers tried it all. Stars were born and the impossible was constantly being proven doable — there was no telling what was coming next.

Then one individual emerged who made fun of the new school, the old school, and everything in between. He did not ski. He did not snowboard. Rather, he claimed to be able to stick uphill ice on snowlerblades. His name: Saucer Boy.

Saucer Boy was a whiskey-swigging, cheese-grater-carrying, Bogner-clad outcast. He was adamant to prove that his sport — a hybrid of saucer-riding and snowblading — was to be the next great craze in snow-sliding.

Even when coupled with a saucer for extra flotation, the shortcomings of a 130-centimeter ski on the hill outweighed the luxury of walking into a bar without clicking out of your skis. Furthermore, they were like rollerblades, which definitely were not cool, and skiers were desperate to be cool.

But Saucer Boy was born with a never-give-up mentality. He crashed photo shoots, stowed-away on boats with helicopters, and ran his mouth incessantly about his skills. Pro skiers and riders shunned him, told him to beat it. Mountain guides complained that he was a hazard and a nuisance.

Saucer Boy turned to the only man who just might believe in him: Shane McConkey. Shane was a fellow misfit who once lived in a shed. He had persevered in adversity and shrugged off the jaded pro skiers who told him that fat skis were cheating and that water skis would never work on snow. Shane had even believed in his sport so much that he started the International Free Skiers Association to create a platform for freeskiers to legitimize their broad-sweeping claims of radness. Shane had proven that skis and a parachute were a combination for limitless fun, how could he not see that snowlerblades and a saucer was the next big thing?

But alas, Saucer Boy and Spaulding (his saucer) struggled to catch Shane’s attention. Shane was constantly shredding fresh tracks in unthinkably bold places and flying through the air having more fun than imaginable. He won trophies and had many leather-bound books.

But one lonely February day, Saucer Boy caught the iconic Squaw Valley and Red Bull-sponsored pro rehabbing an ACL injury and looking for something fun to do. He convinced Shane that through his alliances at Squaw Valley, he could put snowlerblading on the map. He offered up $88 of his sponsor money, from Pelican Snow Saucers, to see it through. Shane took the bait and the Pain McShlonkey (PMS) Open was born.

Sixty-five pros from nine continents and 77 countries converged upon Squaw Valley, with saucers and snowlerblades in tow, to take part in first-of-their-kind events. The disciplines were switch GS racing, hot dog downhill (once affectionately referred to as Chinese downhill, but changed for political correctness), and small air.

Thousands of screaming fans watched in awe as the biggest names in sports flailed down mountainsides in brightly colored clothing. Corporate sponsors pledged to write checks for hundreds of dollars to sponsor the next event. Saucer Boy was ecstatic.

After two years of putting on the PMS, Shane moved on with his fast-paced life. He designed skis that changed the ski industry forever, none of which were shorter than 130 centimeters. He married the stylish, snowboarding daughter of a supermodel and had a beautiful daughter named Ayla and even skipped powder days to spend time with her. When asked why he stopped organizing the Pain McShlonkey Open, he offered a characteristically deep explanation: “Events are a lot of work.”

Since then, Saucer Boy was spotted just twice: once posting flyers in Boulder, Colorado, about a “Saucer Cross” that never happened and another time crashing a posh rehab facility in Malibu preaching to celebrity addicts about how the saucer is a source for the “ride of your life” and that its shape is a metaphor for “life’s journey.”

Soon, the nameless hybrid sport of snowlerblading with a saucer had vanished into obscurity. Upon Shane’s death in 2009, the two founders of the PMS were officially gone.

In 2011, Shane’s Zimbabwean trophy wife and her amazingly supportive group of friends and board members started the Shane McConkey Foundation (mcconkey.org). The team spearheaded a wildly successful event in Squaw Valley featuring a saucer-blade hot dog downhill, which was to become forever known as the Pain McShlonkey Classic, and a gala hosting the Silicon Valley elite, several Saudi Princes and Russian oligarchs, three NBA stars, and one mountain bike baron.

The Shane McConkey Foundation is run by Sherry McConkey and inspired by Shane’s passion for life, his community, nature, competition, and acronyms. The foundation is committed to R.A.D., which stands for Random Awesome Deeds. Over the past 10 years, they have donated more than $450,000 to local charities and they hold two coveted competitions each year: The PMS Classic and the Shane McConkey Eco-Challenge, which challenges kids to identify and creatively resolve an eco issue. To date, 1,500 kids have participated in the Shane McConkey Eco-Challenge.

The McConkey Foundation and the PMS Classic are cherished by the mountain community. Mark your calendars and wax your snowlerblades, because Squaw Valley will once again host the PMS on March 28. Be at the bottom of Red Dog by 9 a.m. sharp to watch the all-time-greatest ski event ever known to man or woman, in the global history of the world.

For information about the Shane McConkey Foundation or to donate, check out mcconkey.org

Main Image Caption: 3-2-1 DROPPING: Contestants in the PMS Classic look for the very line that Saucer Boy himself would have skied. Photo by Ben Arnst