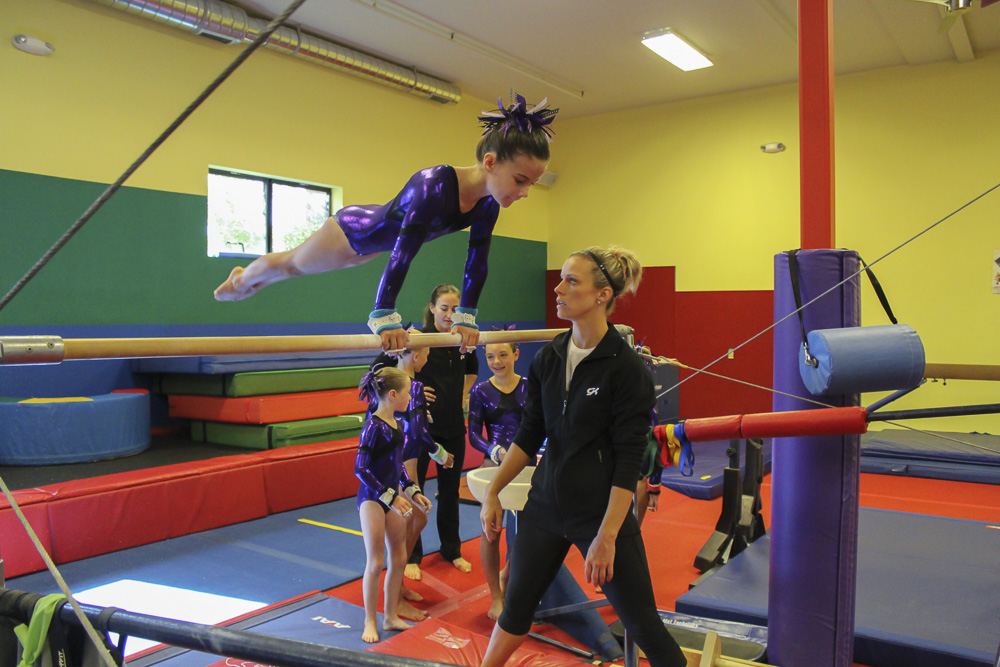 It used to be that if a child in the Tahoe/Truckee area wanted to do gymnastics, her parents had to drive her almost an hour away to Reno. That all changed in 2005 when My Playground, which only served 1-year-olds at the time, expanded to include Truckee Gymnastics, the area’s first gymnastics facility. But even then, kids at the higher levels still had to make the commute down I-80 if they wanted to compete. Owner Laura Bronstone has now taken Truckee Gymnastics to the next level, and saved parents a lot of drive time, by forming the region’s first competitive team this summer.

“It’s something that puts Truckee a little more on the map athletically,” said Michele Horn, Truckee Gymnastics team coach. “We used to send kids to Reno if they wanted to compete or got to level 4 or 5, when they would max out.”

Horn, 28, used to be one of those gymnasts making the hour commute to Reno five days a week in order to compete at gyms like Flips USA Gymnastics and Gymnastics Nevada. “I was behind because we didn’t have a competitive program up here,” said the Truckee native.

Now local gymnasts don’t have to worry about falling behind anymore.

“It’s an exciting thing for a small town like Truckee,” said Bronstone, noting that, in addition to soccer, skiing, and swimming, a gymnastics team is one of the few club teams in Tahoe/Truckee.

Bronstone had been thinking about the idea of a competitive team for the last few years, but it wasn’t until one of her coaches, Lucia Lake, who coached the gym’s highest level (level 4-5), remarked that her gymnasts were ready for more.

“Lucia said the girls were getting really good, that they wanted to show off their skills,” Bronstone said. “They wanted more hours in the gym.”

But building a competitive gymnastics team is not something done overnight. First Bronstone held parent meetings at the beginning of the summer to gauge interest in joining the team, and to inform them about the costs, both time and financial. The time required is substantial — nine hours of practice per week, with optional Saturday practices as well as travelling to out-of-town meets. This rules out other sports for most team members. Joining the team is also expensive. Tuition for three practices a week runs $400 a month, plus around $900 a season for uniforms, meet entry fees, USA Gymnastic membership, and travel time and mileage for coaches, although this amount varies depending on the number of girls on the team. That’s about $3,000 more than Squaw Valley’s Mighty Mite ski team program, although gymnastics is year-round while ski season lasts four months.

“It’s a very big commitment timewise, financially, and emotionally,” Bronstone said. “The family has to support what the child is doing. If they are not here at practice, it shows up immediately in their skills and at the meet.”

While nine hours a week may sound like a lot of practice, Bronstone said that that number is actually quite low. Unlike other sports like soccer or basketball, upper level gymnastics requires long hours in the gym to ensure the athletes have trained their muscles to perform flips and jumps safely.

“Gymnastics is not like any other sport in Tahoe,” said Horn. “It’s not a seasonal sport. It needs more of a commitment and hours in the gym. It’s also a very dangerous sport. If you are not in the gym training and building muscle memory, somebody could get seriously hurt.”

The next step in forming a competitive team was becoming certified by USA Gymnastics, the sole national governing body for the sport of gymnastics in the United States. In order to coach on the floor of USAG sanctioned meets, all coaches have to be USAG members, pass two online courses, and undergo a background check. Truckee Gymnastics also had to become a club member of USAG at a cost of around $500.

Seven girls signed up for the team, ranging in age from 8 to 14 and levels 3 to 4 (gymnastics goes up to level 10 and elite, which is the Olympic level). Bronstone hopes to grow the team to 10 to 15 girls to bring down the costs.

The team’s first meet was Sept. 6 in Grass Valley, which did not give the girls a lot of time to prepare. Since Truckee Gymnastics’ spring floor and vault runway are not regulation size, the team had to travel to Gold Country Gymnastics in Grass Valley to practice. Meets consist of four events with compulsory routines: floor, vault, bars, and beam, and the athletes are judged as individuals and a team.

Reilly Baker, 8, competed in three events, skipping floor since her back handspring wasn’t ready. Although she didn’t place in the top three, her mother, Megan, said that teaches an important life lesson.

“That’s life. Not everyone wins,” said Baker, noting that Reilly is working even harder to get her back handspring down. “You do your best and have fun. And that’s what she did.”

Boys have six events, only two of which are the same as girls — vault and floor. The others include rings, high bar, parallel bars, and pommel horse. That is the main reason Truckee Gymnastics does not have a boys team — it doesn’t have enough space.

A second meet is scheduled for Nov. 1 in Oroville. Normally, Horn said, the fall season includes six or seven meets, “but we are easing everybody into it.”

No matter if a child is interested in gymnastics as a recreational sport or strives to reach the competitive level, both Bronstone and Horn say gymnastics is a great sport to compliment other activities, calling it one of the few “base sports.”

“Gymnastics builds body awareness and spatial awareness,” Horn said. “Gymnasts are strong and flexible in every muscle. It’s unusual in sports to have strength and flexibility. It’s one of the best sports any child can do.”

Baker also likes the self-esteem the sport has helped instill in her daughter.

“I like the discipline, and definitely the exercise since they don’t get enough in PE in schools,” she said. “She’s a strong girl and this fits with her personality — she’s determined … And being part of a team has really helped her confidence. She feels important.”

And now, instead of sending kids like Reilly to Reno to compete, young gymnasts can stay close to home to achieve their dreams.

“Human beings need goals, they need something to work towards, to grow or die,” Bronstone said. “The team gives all of us a higher level of gymnastics to work toward as a gym. I love that. That’s life.”